Nov 2, 2018 11:01 AM PHT
Lian Buan
Facebook Twitter Copy URL
Copied
Bernabe often votes with a nuance. She is respected in the High Court because of her collegial virtues. 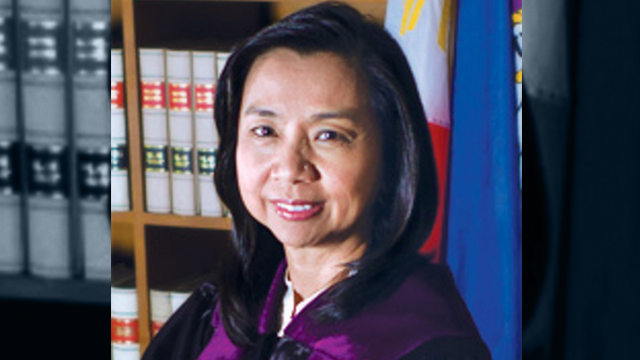 MANILA, Philippines – Associate Justice Estela Perlas Bernabe is one of the Supreme Court justices who can’t be characterized solely on the basis of her vote. She votes for a result, often with a nuance.

It’s what makes her unpredictable, and to some, objective. It’s also why Justice Bernabe easily breaks typical stereotypes of justices of the High Court.

Bernabe’s voting record comes under scrutiny as the Judicial and Bar Council (JBC) vets her and 4 other incument justices for the chief justice post.

For one, she has voted against former president Benigno “Noynoy” Aquino IIII, the one who appointed her, and on key cases in his administration at that. She voted against the Enhanced Defense Cooperation Agreement (EDCA) and the Disbursement Acceleration Program (DAP).

Bernabe also breaks the notion that career jurists will tend to vote in favor of the bureaucracy; that they will most likely respect the discretion of elected bodies.

Bernabe is memorable for two ponencias that dealt a great blow to this bureaucracy. She wrote the decision that declared the pork barrel system unconstitutional, and the decision that abandoned the politician’s favorite condonation doctrine.

“She is a career jurist, went through all the courts, from the MTC (Metropolitan Trial Court) upwards, and therefore you would think that she would be beholden to the executive branch, but again, no. She has decided cases as she has seen them, she calls it as she sees it, she has written majorities, she has written unanimous decisions against the executive, for example,” said former Supreme Court Spokesperson Ted Te.

For critics of the Duterte administration, Bernabe wouldn’t pass as their easy favorite.

She concurred in the decision that acquitted Gloria Macapagal Arroyo of plunder, and in the landmark decision that declared martial law in Mindanao constitutional.

But one would have to read her separate opinions to appreciate the nuances of her concurrences.

For example, the Arroyo acquittal, written by Associate Justice Lucas Bersamin, is criticized by some in the judiciary as enabling impunity for raising the standards of plunder too high.

For one, it introduced the principle of a main plunderer, a legal doctrine that eventually helped Jinggoy Estrada get bail, and continues to be used by other plunder defendants like Janet Lim Napoles.

The principle says that for a crime of plunder to be established, a main plunderer has to be identified.

Because none was identified in the P365-million Philippine Charity Sweepstakes Office (PCSO) intelligence fund scam, the Bersamin ponencia says the P365 million must then be evenly divided into 10, the number of the accused. The quotient is P36 million, which is below the plunder threshold of P50 million.

“It is of no moment that the main plunderer was not identified on the face of the Information. Contrary to the ponencia’s stand, the identification of a main plunderer is not a constitutive element of the crime of plunder,” Bernabe categorically says in her separate concurring and dissenting opinion. 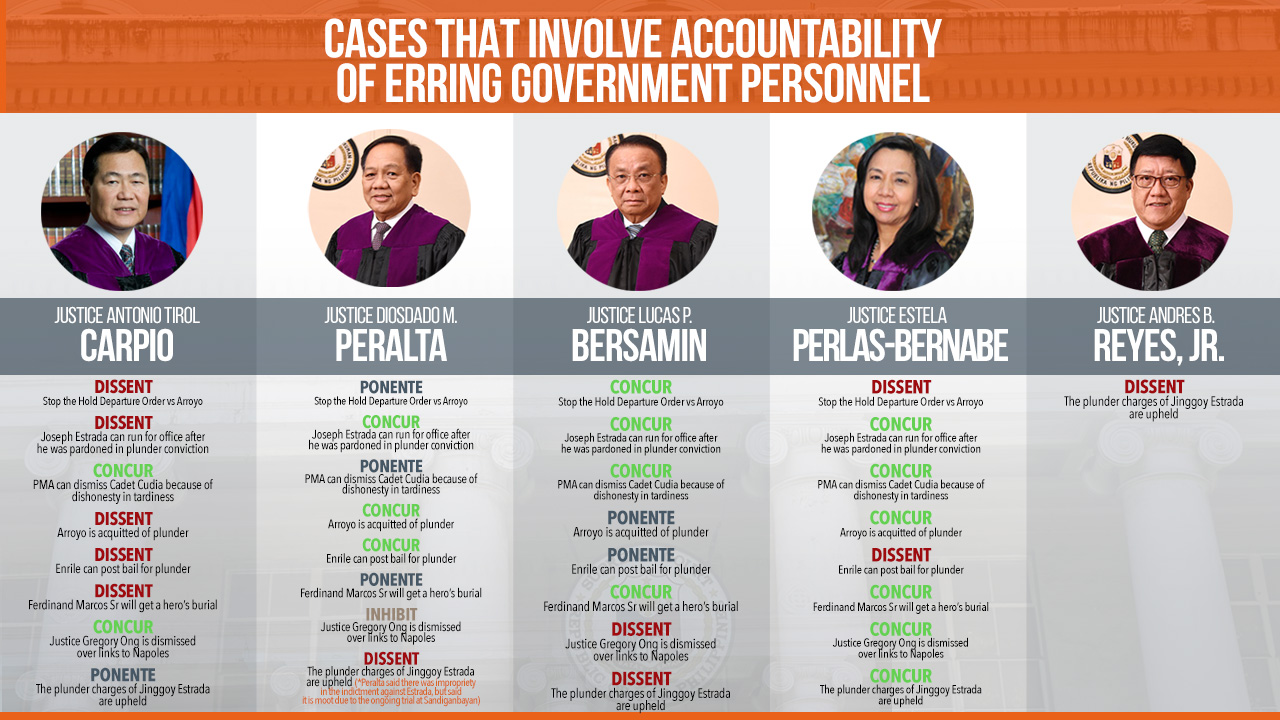 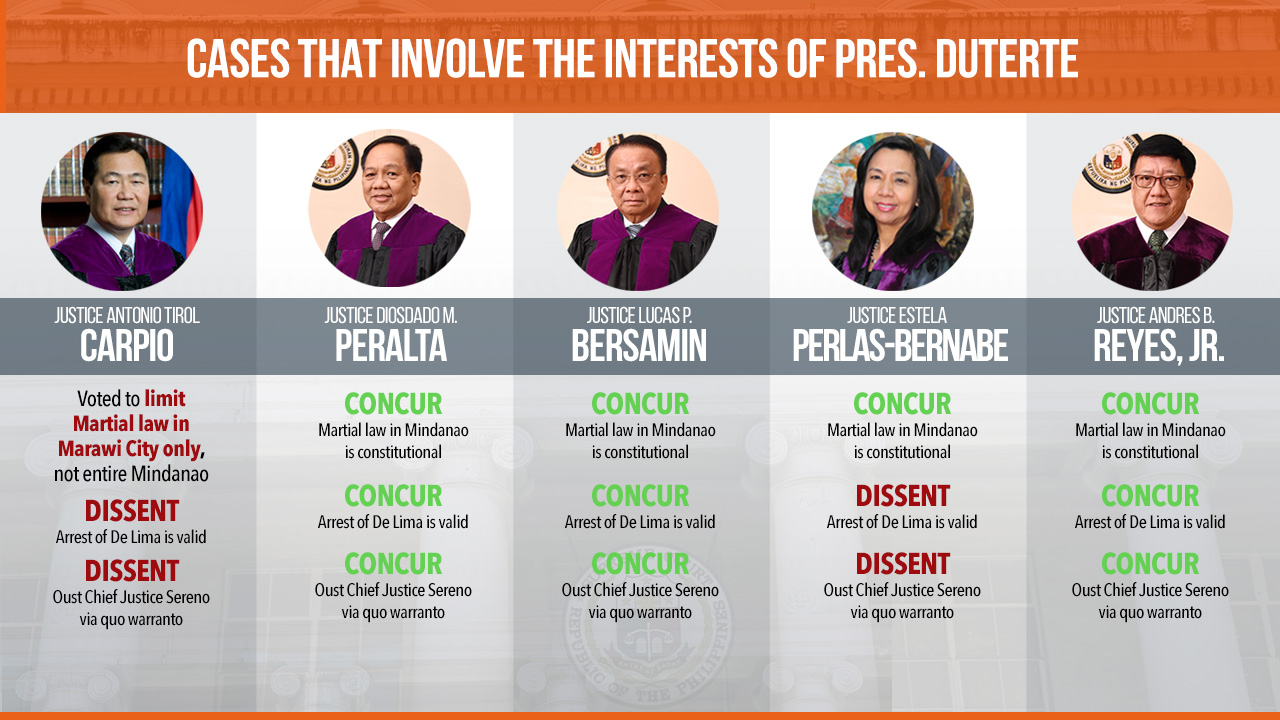 When the Supreme Court upheld Duterte’s martial law in Mindanao, it also gave the President almost absolute discretion in determining whether there is an actual case of rebellion to merit a proclamation.

“The President only needs to convince himself that there is probable cause or evidence showing that more likely than not a rebellion was committed or is being committed. To require him to satisfy a higher standard of proof would restrict the exercise of his emergency powers,” said the ponencia written by Associate Justice Mariano del Castillo.

Bernabe recognized that the Court “carries no technical competence” to assess a president’s factual basis, but she disagreed that “the Court does not need to satisfy itself that the President’s decision is correct.”

“Our deference to the President must be circumscribed within the bounds of truth and reason. Otherwise, our constitutional authority to check the President’s power to impose martial law would amount to nothing but an empty and futile exercise,” said Bernabe in her separate opinion.

She added: “The Court should always ask itself whether or not the President’s call to impose martial law in a certain territory is rationally commensurate to the needs of the public. For after all, the dangers to society’s well-being, both actual and perceived, are what justify the imposition of martial law.”

Bernabe was unpredictable in most high-profile cases, but based on a review of key SC decisions from 2006 to the present, Bernabe did show a tendency to favor powerful interests. 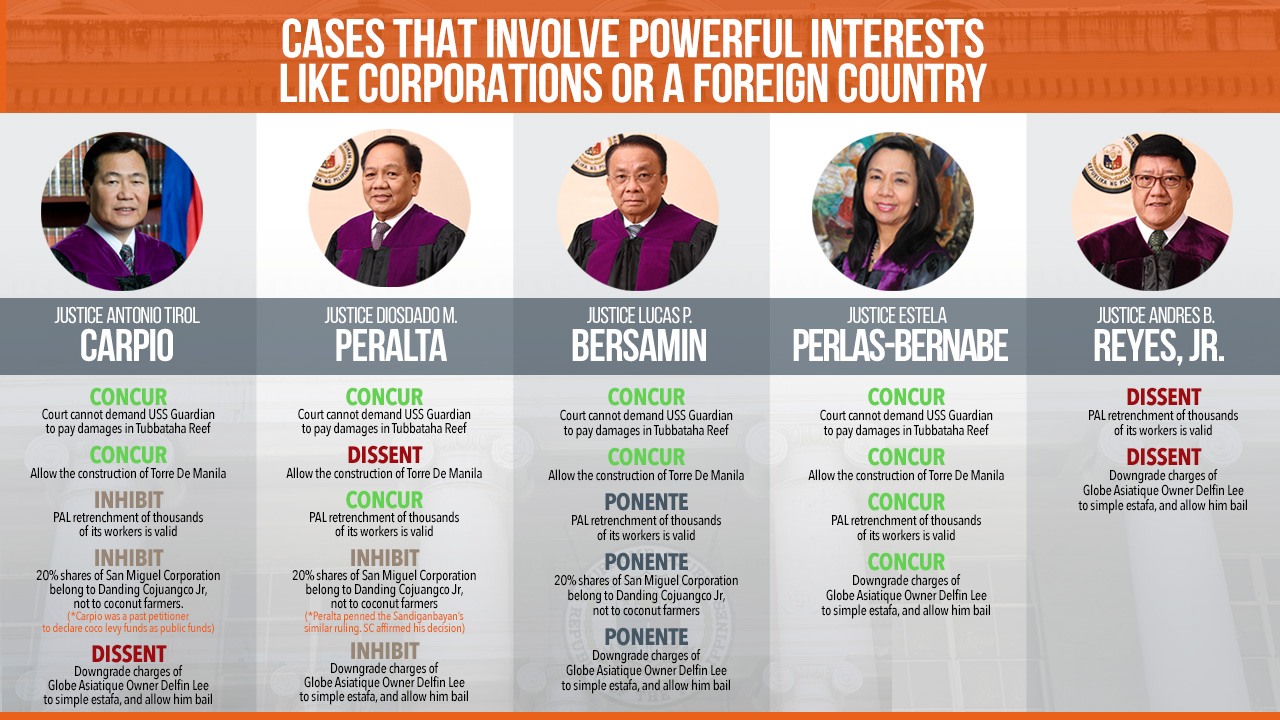 The PAL decision was a flip-flop for the Supreme Court as it reversed two previous decisions of two divisions in 2008 and 2009. Even the ponente – Justice Bersamin – flip-flopped.

Associate Justice Marvic Leonen slammed the decision as a highly irregular resurrection of the case, and said that “the actions of the majority of this Court en banc creates an ominous cloud that will besmirch our legitimacy.”

Part of that majority was Bernabe, but she did not write a separate opinion to explain her vote.

She did, however, explain her vote in the Delfin Lee case.

The SC majority downgraded the charges of Lee from syndicated estafa to simple estafa in a case of defrauding Pag-ibig home funds contributors of P6.6 billion.

One of the elements of syndicated estafa under Presidential Decree No. 1689 is that more than 5 people should have conspired. But in the Lee case, the 5th member – the lawyer who notarized the affidavits – was excluded as a co-conspirator, leading the SC to say there is no case for syndicated estafa.

Leonen, one of the dissenters, said that the justices should realize that if the Court was to be heavily dependent on the number of people charged, without looking at possibilities that some co-conspirators may be unidentified or even at large, then “a cabal of scammers can then nominally exclude one of their ilk from their organized vehicle and already be beyond Presidential Decree No. 1689.”

Bernabe did believe that the syndicate was run by at least 5 individuals. It was for another reason that she voted to downgrade the charges.

The 3rd and last element of syndicated estafa is that the fraud should have “resulted in the misappropriation of moneys contributed by stockholders, or members of rural banks, cooperatives, ‘samahang nayons’ or farmers associations or of funds solicited by corporations/associations from the general public. “

“After a careful study of this case, I find the third element to be lacking,” said Bernabe.

Focusing on the element that the defrauding must be done against the “general public,” Bernabe said “it is undoubted that the private complainant is HDMF (Home Development Mutual Fund or Pag-ibig); not the general public who claim to have been defrauded through the use of any juridical entity.”

Another dissenter, Senior Associate Justice Antonio Carpio, opposed that view. As Carpio explained, the third element is clearly present because it required “funds solicited by corporations/associations from the general public.”

“In short, the PAG-IBIG Fund consists of monetary contributions solicited from the general public by HDMF, which is indisputably a corporate entity,” said Carpio.

Leonen said that the decision ignored the “devious” agency of Lee, and “placed a primacy on technicality at the expense of the essence of Presidential Decree No. 1689.”

Whether you agree with her votes or not, Bernabe is definitely a justice to watch out for.

In the Court, Leonen said Bernabe is respected because of her collegial virtues. Even the lower courts down to their staff accord her that respect.

“She is able to accommodate a lot of points of view and that is also a mark of a good leader, I would say that those are the things that the Court looks forward to,” said Leonen.