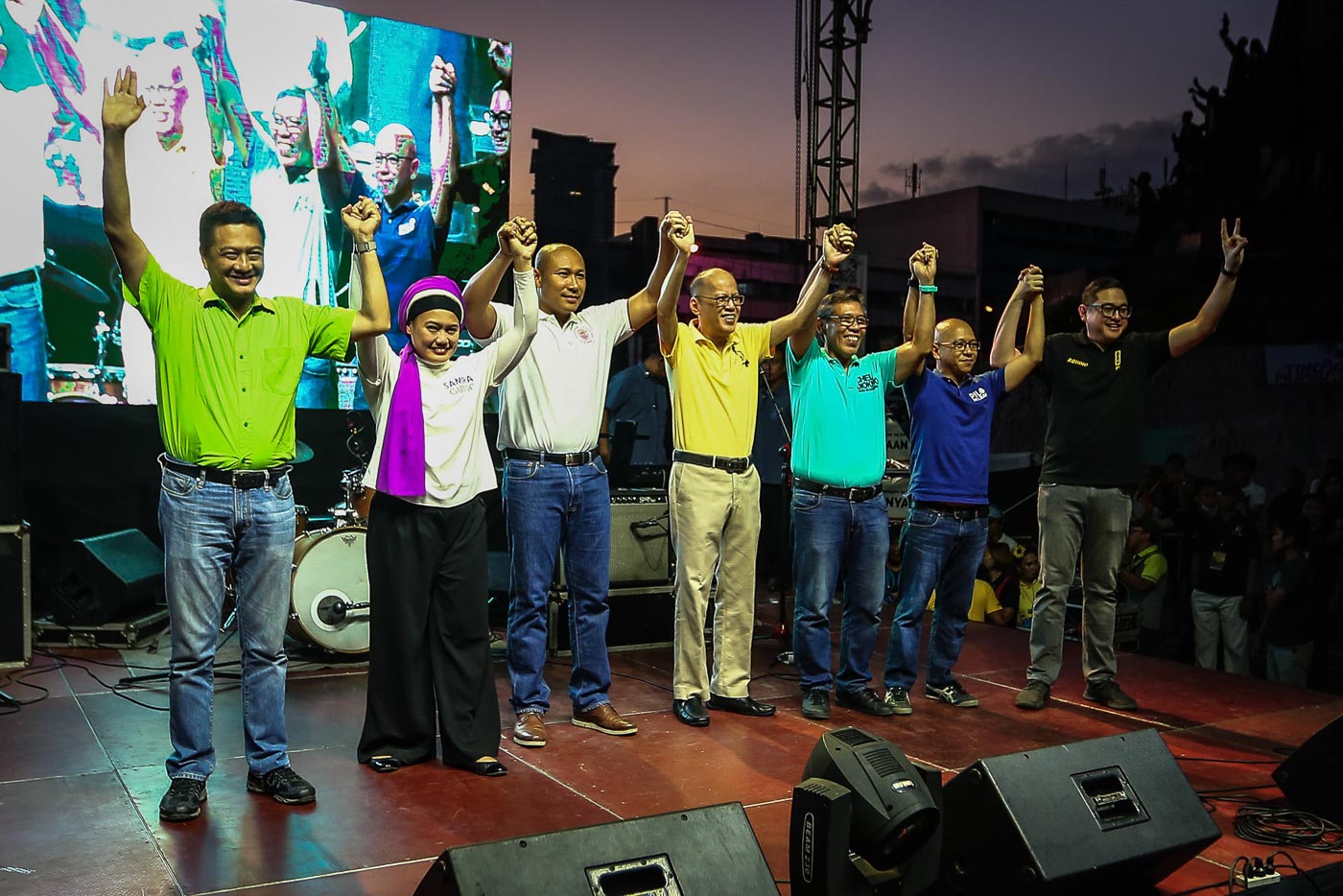 (I promised that I wouldn’t talk for a year lest they accuse me of just trying to create trouble, so I did them that favor, and more than that, I kept quiet for 3 years.)

And the time to speak lengthily just happened to be during a rally for the 33rd anniversary of the People Power Revolution, where Aquino tried to convince voters that the better choice for the Senate would be the Otso Diretso team rather than President Rodrigo Duterte’s.

Is it a good idea to put the Aquino brand in a slate that’s already struggling according to preelection surveys?

“I think so. Palagay ko naman marami pa ring tao na natulungan, na-appreciate ‘yung mga nagawa no’ng time niya (I think he helped a lot of people, and they appreciate what he did during his time),” said the former president’s cousin, reelectionist Senator Bam Aquino.

But while Bam Aquino claims the former president still commands support, the Otso Diretso campaign still makes an effort to distance itself from major controversies under the previous administration, like the Mamasapano and Dengvaxia scandals.

The candidates do not address these issues in their sorties.

“Well, iba-iba rin kasi ‘yung platform namin (Well, we have different platforms). And I think those are being addressed on his own,” said Bam Aquino.

Duterte supporters have managed to cultivate strong messaging, especially online, against the Aquino administration. Everywhere you go on social media, you would see critics harping on Dengvaxia, Mamasapano, and even Super Typhoon Yolanda (Haiyan).

If administration bets are often asked about Duterte’s policies, the Otso Diretso slate is likely to face questions on the Aquino government, too.

But Bam Aquino said, “Well, you have to ask him.”

Hilbay was asked whether Aquino should be held liable for the Mamasapano bloodbath. Hilbay gave a categorical “no,” saying that the former president cannot be held accountable for mistakes of his subordinates.

Aquino received his first warrant of arrest post-presidency over the Mamasapano case, but the proceedings are on hold as the Supreme Court decides whether he should really just be charged with graft, or with 44 counts of reckless imprudence resulting in homicide which could put him in jail for the rest of his life.

On social media, Hilbay was blasted for his answer, forcing the Twitter-savvy lawyer into an extended online debate with his followers, some of them even supporters of the slate.

“Command responsibility is criminal liability, a different form of responsibility. We must recognize the tragedy, but must assign responsibility properly. Thanks,” Hilbay said – a response that still didn’t satisfy some netizens, with one of them telling Hilbay not to “hide behind” legalese.

Human rights lawyer Chel Diokno, who has been performing well in debates, had a much safer answer to the same question when asked on Saturday.

(I cannot put myself in the seat of the judge, if he should be punished, but all I can say is everyone should have accountability, whoever they are.)

Problems also piled up for the Liberal Party (LP) when the Dengvaxia scandal broke out during the Duterte administration, an issue that brought more legal battles for Aquino.

But it appears Aquino is more comfortable addressing the Dengvaxia issue above all else, facing it head-on during the rally, complete with statistics as he claimed that only 17 people became at risk of acquiring severe dengue symptoms because of the vaccine.

Perhaps it’s an easier issue to address because there is a counterattack on the Duterte administration – the hyped Dengvaxia scare caused vaccination rates to plummet and led to a deadly measles outbreak.

Aquino turned the pressure on Malacañang to disown Chief Public Attorney Persida Acosta and help the Department of Health with its bid to regain public trust in vaccination.

Midterm polls as a ‘test’

Aquino said the validation of his performance as president came when 9 of the LP bets won Senate seats during the 2013 midterm elections.

A 2015 study by political consultancy firm Publicus Asia shows that one of the 7 factors that can influence a vote is the endorsement of the sitting president.

The 2019 midterm elections will really test the Duterte magic – will his endorsement lead to more votes for the administration slate, or will it tilt power to the opposition?

In the same way, it will also test the strength of Aquino’s support.

“Simple lang itong darating na eleksyon eh (The upcoming elections are simple),” Aquino told an admiring crowd at sunset at the People Power Monument, as he explained that the best way to reject Duterte’s policies is to choose the opposing side.

In the coming weeks, not only will the Otso Diretso candidates have to work double time to increase awareness of them among voters, they also have to balance the good and the bad of an Aquino endorsement. – Rappler.com