MANILA, Philippines – President Rodrigo Duterte’s closest aide Bong Go vehemently denies that government resources are being used for his senatorial bid, but analysis of news coverage online shows the government’s news agency is the most prolific in publishing public relations (PR) articles about him.

The Philippine News Agency (PNA), the government’s newswire service which runs on taxpayers’ money, is the top publisher of Bong Go PR news on the web.

Their publication of PR-like articles peaked after Go resigned from his government post to run for senator.

PR articles are articles that show a politician in a flattering light and are often sourced purely from press releases by the politician’s camp, instead of being independently gathered by a media entity. In some cases, they are merely repackaged press releases with little or no changes made by the news outlet publishing them.

PR articles include stand-alones of a politician’s statement, charity work, and activities that are often not newsworthy in themselves. PR articles hardly mention facts and context that could reflect negatively on the politician.

The Center for Media Freedom and Responsibility (CMFR) has cautioned media entities against unquestioningly publishing PR articles about senatorial candidates.

In January, it jeered the Philippine Star for publishing 18 reports of “doubtful news value on Go’s activities and statements, his promises, praises for some groups, declaration of support for some causes, and his admiration for Duterte, among others.”

PNA leads the pack in publishing such articles, at least, out of all news sites and blogs. Rappler’s analysis did not include print reports or television reports.

Rappler’s method involved a perusal of any article that mentioned Go in its article or body, through a program that made use of natural-language processing. By clumping articles that used similar keywords and focused on the same topics, Rappler mapped out the kinds of articles that mentioned the senatorial candidate.

When Rappler zeroed in on “PR” news stories, it found that PNA led the pack when it came to publishing such articles.

Of the 1,053 such articles, PNA published around 22% or roughly a fifth of these stories.

These press releases were sent to other media outlets by the email address “sapkuyabonggo@gmail.com,” which regularly sends PRs.

A significant chunk of PNA news about Go are about Malasakit Centers, a pet government project of Go’s that he often cites in campaign rallies.

Who were other top publishers of PR-like news? In second and third place, respectively, were Philippine Daily Tribune (13%), a mainstream media entity, and Concept News Central (8.2%) – a pro-Duterte blog.

Again, the data does not include articles found in printed newspapers like the printed versions of Manila Times, Inquirer, and PhilStar.

Things get even more interesting when looking at the timing of PNA articles about Go.

He didn’t use to get as much news coverage, even when he was a Cabinet member.

In the next two months, May and June, PNA published 18 PR articles each month. All the way until January, PNA published not less than 20 PR articles about Go. This number peaked in January, when 28 such articles were published. January 13 marked the start of the election period.

How did PNA cover other candidates?

Even among other Duterte disciples running for senator, Go appears to enjoy more news coverage by government-run agencies.

Rappler’s research team compared PNA coverage of Go with PNA coverage of Ronald dela Rosa, another favorite of the President’s, who had occupied a top government post before running for senator.

For good measure, we also charted PNA articles about opposition candidate Bam Aquino to see if PNA coverage differed for a candidate not endorsed by Duterte but who was still a government official.

The data is interesting, as visualized by this graph.

But in the same period, Go, who was then Duterte’s “special assistant,” had very few PNA articles mentioning him, as represented by the tiny, and at times non-existent, red lines.

Come 2018 though, the chart does a 180-degree turn. Go’s red line now towers above Dela Rosa’s and Aquino’s – even during the period when he and Dela Rosa resigned from their posts and Aquino continued to serve the remainder of his term as senator.

The data is clear: PNA news coverage of Go drastically increased in 2018, when talk of the senatorial race began heating up, and this increase in news coverage was not seen for Dela Rosa, even when it could have been reasonably assumed that he would enjoy the same perks.

Rappler asked News and Information Bureau (NIB) chief Gigi Agtay if there was any instruction from Malacañang to write articles about Go. The NIB is the office in the PCOO that oversees PNA.

Agtay only said that “PNA does not receive requests for coverage from Bong Go’s team.” She did admit, however, that PNA does publish PR articles, but only those that are “newsworthy.”

“Just like other PRs sent to the PNA desk, PNA accommodates those that are newsworthy,” she said.

Among Bong Go press releases that were published were those that were related to Duterte or a government project.

“Bong Go’s PRs like Malasakit Centers launch saw publication because the one-stop-show Malasakit Center is a health project of the President to give access to as many people who need medical services and free medicines,” she told Rappler. Other published PRs “were about activities wherein Go represented the President despite his resignation as SAP,” she added.

However, this doesn’t explain PNA articles like “#BongGhost laughs off fake news” and “’Bayan for Bong Go’ movement launched in Metro Manila.”

The “BongGhost” PR article is about Go dismissing claims that a military chopper he was riding had crashed in Albay, thus supposedly killing him. Aside from PNA, only Manila Times and the Philippine Daily Tribune reported on the false claim and Go’s reaction to it. No other news outlet took it seriously.

The PR quotes Go as texting reporters and friends, “Let’s pray for him. Dis is bong Ghost texting you.”

In the 2018 national budget, the NIB was allocated a budget of P122 million. Of this, P93 million went to its “government news information and media services program.”

PNA is not the only government-run communication agency publishing content that appears to boost Go’s senatorial bid.

People’s Television or PTV, a state-run television channel, tweeted a video of El Shaddai leader Mike Velarde raising Go’s hand in a gesture of support for his senatorial bid. 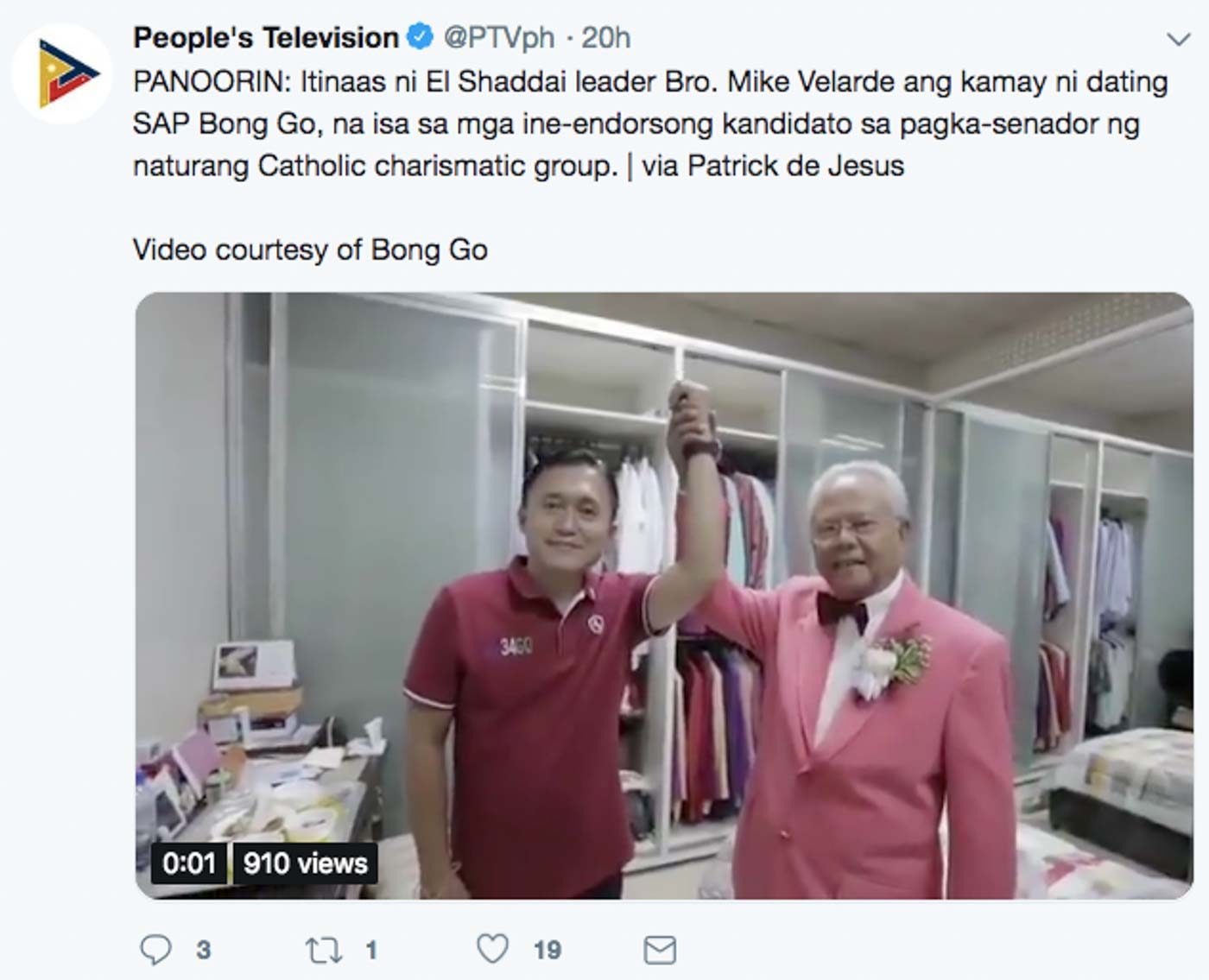 The video, according to PTV itself, came from Go. PTV tweeted the video with caption on Monday, May 6.

The day before, PTV tweeted photos and made a video report on Go’s “3-Pointer ng Bayan” advocacy tour where Go went around Valenzuela City giving away taho, lugaw, and ice cream, and posing with supporters. Go is an avid basketball fan and player who often uses a basketball theme in his campaign materials.

So when Go claims no government resources have been used to boost his senatorial bid, he’s not being accurate.

Rappler’s perusal of online news coverage about Go also shows how the Duterte aide has ensured media mileage leading up to the campaign season.

After the PR articles, a sizeable chunk of stories mentioning Go are stories that quote him about breaking news about President Duterte. This shows how the former presidential aide took advantage of his access to the Chief Executive to get in the news.

Some 1.8% of articles mentioning Go were about Duterte’s health issues (articles about Duterte’s trips to Hong Kong also discussed his health but are not part of the 1.8%). Go was often quoted by media on this extremely high-interest issue because he had been giving updates on the President’s whereabouts and even sent photos of Duterte at home.

Media lapped this up from Go since Malacañang and its presidential spokespersons often did not have the information Go had.

In July 2018, the biggest issue which led to Go’s mention in news articles was the Mocha Uson-Kris Aquino spat (1.9% of all news articles analyzed for this story). Go got lots of media mileage from that because it was he who relayed Duterte’s thoughts on the matter to the public. The then-aide even called a press conference just to discuss the controversy.

Another opportunity that got Go’s name in the news: Duterte’s sudden trips to Hong Kong  and other trips abroad. Because Go is always by Duterte’s side, he was able to give media details on these visits. The Hong Kong trips were of special interest because of the claims that Duterte went there for medical attention, which Go, of course, denied.

Another example of using his unprecedented access is Go’s announcements of Duterte signing popular laws. Even before Presidential Spokesperson Salvador Panelo could make an official announcement, Go’s staff had already sent press releases that Duterte had signed the 105-day maternity leave law and the law strengthening health services for HIV/AIDs patients.

From 2018 to the early months of 2019, Go has functioned as Duterte’s de facto spokesperson, speaking with authority on all matters having to do with the President.

This was not always the case. Before any talk of the senatorial elections, Go had evaded media attention, refusing to be quoted and consistently pointing reporters to the presidential spokesman if they wanted official statements.

Reporters who knew Go’s aversion to media then were surprised by his sudden change in attitude. (READ: Introducing the new Bong Go: From media-shy to media-savvy)

Lastly, it was Duterte himself who made sure Go would get media mileage. Duterte drummed up Go’s senatorial candidacy by mentioning his aide’s plan to run for senator in his public speeches.

He has also used these opportunities – broadcast live on TV and on the internet – to sing praises for Go.

It’s likely not surprising for most that a government entity supports Go’s candidacy, but Go’s claims that public resources don’t go to promoting his senatorial bid don’t hold water.

Go has a suggestion to voters if government funds were used for his senatorial candidacy.