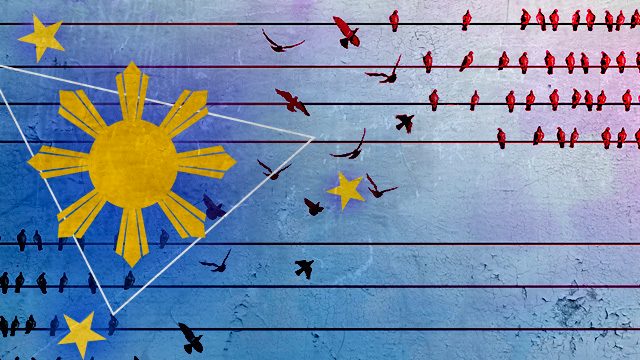 Facebook Twitter Copy URL
Copied
The party-switching culture, academics say, are unhealthy in a democracy. Proposed changes to the Constitution attempt to curb this.

MANILA, Philippines – Ideally, government does not need to regulate a politician’s political affiliation or even watch over which political parties he or she wants to join.

However, party-switching in Philippine politics “has become the norm, the practice,” said Consultative Committee (Con-Com) member Julio Teehankee. “And it is not good for a healthy democracy.”

In the first part of this story, data analysis shows that party-switching is prevalent in the Philippines, especially during the midterm elections. Politicians and candidates usually attach themselves to the party of the incumbent President.

“It creates the worst incentives in terms of trying to align out of convenience rather than out of reform packages or reform agendas.”

The candidates’ unclear political or ideological stances contribute to the problem, which in turn, fuel political patronage on the part of voters.

In the end, political parties suffer because there are lesser chances to build themselves around platforms, instead of personalities.

“Right now, when you are party-switching, you can’t really build the discipline to keep the political parties relevant,” said Mendoza. “If you are losing your membership, you don’t have much clout to bargain with.”

Besides this, when internal party conflicts blow up, factions of parties just break away and form new ones.

Former vice president Jejomar Binay did this for his 2016 presidential campaign, when he bolted from his long-time party PDP-Laban and formed a new one, the United Nationalist Alliance.

Meanwhile, in 2013, ex-Lakas members who did not want to join the Liberal Party (LP) banded together to form the National Unity Party (NUP).

LP itself was a breakaway Nacionalista Party faction after World War II in the late 1940s.

PDP-Laban almost encountered this recently, when a faction elected its own set of officials. President Rodrigo Duterte had to step in to resolve the party row. In November 2018, the Commission on Elections (Comelec) recognized the original PDP-Laban group as the legitimate one.

Then there’s the Hugpong ng Pagbabago regional party, formed by presidential daughter and Davao City Mayor Sara Duterte. Many Davao region politicians quickly joined HNP. Even personalities outside Davao are tagging along, even if they’re not signing up for the party.

The art of staying put

With all of these in mind, the Consultative Committee sought to regulate “party switching” in their proposed changes to the 1987 Constitution.

Section 7 of Article V of the draft charter outlines the desired reforms:

“What we want to accomplish is building internal party democracy,” Teehankee said in a mix of English and Filipino. “What we want is, you politicians stick it out together. Let fights happen, but within the party. And hopefully, everyone will get used to it, the system gets institutionalized, so that in the future, we don’t need any regulation or any ban. It will be self-regulating.”

The Con-Com also made other changes to the political setup in the country, such as self-executing clampdowns on political dynasties (up to the 2nd degree of consanguinity or affinity only), the establishment of a “Democracy Fund” to subsidize political parties via crowdsourcing, and a provision of equal representation of women candidates as far as practicable.

“The Con-Com believes that before we go into the bigger reform of shifting from unitary to federal system of government, you have to look at the basic political reforms first.”

The draft Constitution the House approved in December 2018 also has a party-switching restriction. It bans elective officials from transferring to another party 6 months before or after an election, or else he or she would have to forfeit his or her position.

However, the anti-dynasty provision wasn’t present in the House’s draft charter. It even removed term limits for elected officials.

Ultimately, Mendoza said that changes in the political arena wouldn’t be changed by these reforms alone. It won’t happen overnight, too.

“You will prevent a lot of party-switching immediately, but whether they stand for stronger or clearer policy reforms, that takes time, I think. You need it to be part of culture among your politicians. And it takes time to actually stick to an advocacy,” said Mendoza.

In time, Mendoza argued, voters would adapt to this culture as well. “The main punishment would be really from the voters. By then, the voters themselves are so mature that if you go and switch, yeah, you can pay a fine… but I wouldn’t vote for that person because he or she keeps on switching parties or doesn’t even stand for anything. That’s the ultimate disincentive for behaving badly.”

Developing political parties themselves would be beneficial in the long run, infusing government with “new leadership” and “new citizenship.”

“You need good technocrats, lawyers, economists, agricultural people, scientists, who you can then tap when you have control of the levers of power. If you somehow get into government, you can tap key people who believe in a certain set of reforms, and who are actually part of that movement, right?” asked Mendoza.

The Con-Com proposed these reforms, said Teehankee, “so that our party politics will not be based on popularity or personality or patronage, but on programs, platforms, and dedicated and competent service to the people.”

“And to level the playing field. So hopefully we reach that point.” – Rappler.com