Why Filipinos believe Duterte was ‘appointed by God’ 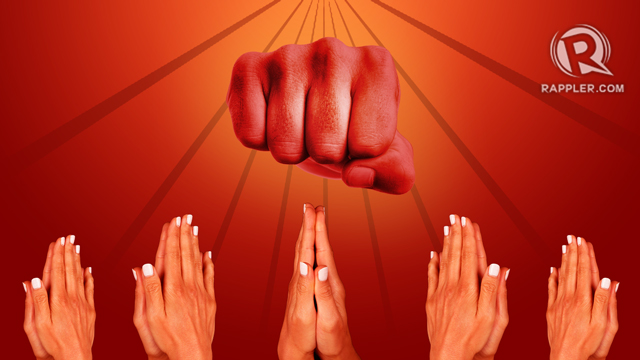 MANILA, Philippines – For the 2019 midterm elections, leaders of the Catholic and Christian churches went all out against the senatorial bets of President Rodrigo Duterte.

Archbishop Socrates Villegas, a prominent Duterte critic, released a video hitting the President and challenging Catholics: “Are you going to betray God, are you going to deny your faith, by your vote?”

This was the most powerful preelection message from a Catholic bishop in years. It came, after all, from a protégé of Jaime Cardinal Sin, the Manila archbishop who helped mount the 1986 revolt against dictator Ferdinand Marcos.

Later, Catholic and Christian leaders in the People’s Choice Movement endorsed all 8 senatorial candidates of the dominant opposition and two other bets. The lay arm of the Catholic Bishops’ Conference of the Philippines eventually backed the candidates of PCM.

A group of 150 leaders from the Aglipayan Church, a Filipino church that broke away from Roman Catholicism in 1902, also rejected Duterte’s senatorial bets and instead endorsed opposition and independent candidates.

The churches’ warnings against Duterte’s anointed ones, however, backfired.

In a first after World War II, no opposition bet made it to the Philippine Senate. Nine of the 12 senators-elect have openly allied themselves with Duterte.

How did Duterte’s bets manage to defy God’s messengers?

In his past 3 years in office, how has Duterte made it unscathed after he once cursed at Pope Francis, ordered to have bishops killed, and even called God stupid? How has he kept himself immune from tirades of Catholic bishops against his bloody but popular war on drugs?

Experts said the answer lies in the view of many Filipinos that Duterte was appointed by God to bring swift justice to the Philippines, and that his anti-Catholic barbs target a hypocritical church, not the God who supposedly brought him to power.

Sociologist of religion Jayeel Cornelio learned more about this when he, together with research associate Erron Medina, conducted research about how churches respond to Duterte’s drug war.

Cornelio and Medina’s paper, titled “Christianity and Duterte’s War on Drugs in the Philippines,” was published in the scholarly journal Politics, Religion, and Ideology on May 22.

For this paper, Cornelio and Medina did their field work in Payatas, one of the poorest communities in Metro Manila. Cornelio mentioned this study in a Rappler Talk interview shortly before the May 13 midterm elections.

Duterte was even compared to King Josiah, an Old Testament king who removed the idols of Judah.

Cornelio and Serrano’s paper cited religious leaders in Payatas whose real names they did not disclose.

One of their interviewees was Pastor Julius, who serves a Baptist church. Pastor Julius supports not only Duterte but also United States President Donald Trump, who is portrayed by the White House as appointed by God. (Trump was even God-sent to rescue Israel from Iran, US Secretary of State Mike Pompeo recently suggested.)

Cornelio and Medina wrote this of Pastor Julius:

Pastor Julius believes that while people can be involved in political issues, people must also understand that there are “matters beyond their control.” Citing the election of President Trump, he said that even though people might want other candidates to win, “God wanted Trump to win.” He further claims that people need to accept Duterte if they really believed that God is in control. He also affirms that Duterte is God’s way of “punishing” Philippine society for its sins. From this, he connects political events and separation from God. For him, Duterte’s election is God’s way of testing the faith of Filipinos. He even uses Nebuchadnezzar’s example in the Bible where God allowed the king to experience suffering so he could repent. He then concludes that “God needed to appoint Duterte in order to get Filipinos to repent.”

The two researchers also cited “pastors of a prominent megachurch in the Philippines, with community outreaches to Payatas.”

“God gave us government…to protect the innocent and punish the guilty. They have swords and guns for a reason,” the pastors said. 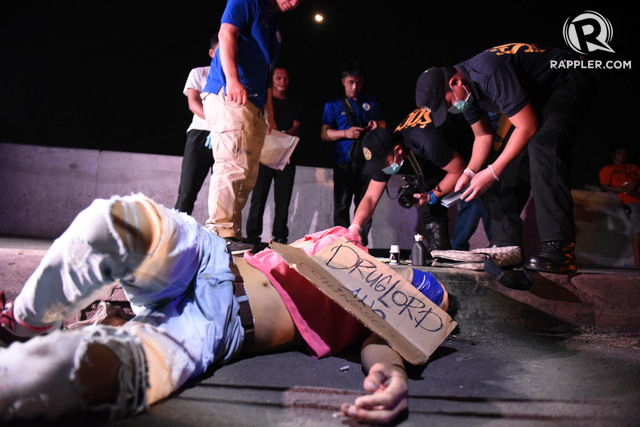 Pastor Nick, an Evangelical, was quoted in the study as saying:

It is God’s design that there is law and order in society. For example, we prohibit jaywalking because we don’t want anyone to die because of accidents. If you are law-abiding, you will be safe from any of these accidents. And you have to realize that the law of the land has God’s anointing. There is no law on earth meant to harm people. You look for one that hurts people. You will not find any. Never.”

On Rappler Talk, Cornelio said their findings show a desire among Filipinos for “swift justice.”

Cornelio finds this at the core of people’s support for Duterte, who ran on a platform of stamping out crime and corruption in 3 to 6 months. (He has failed to do this in the past 3 years.)

“In my view, the support for Duterte is not only a political support. Because he’s Bisaya? No. At the very core of that, that support is moral – what is right, what is just,” he said.

This is why the guidance of Catholic bishops in the May 13 elections likely backfired. 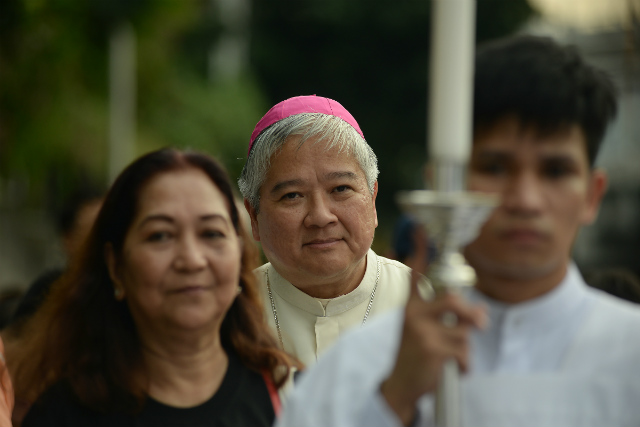 Cornelio said the framing of Villegas’ preelection video, for example, “is a mistake.” For Catholics who watched it, Villegas’ video carried the implicit message that voting for Duterte’s candidates is akin to rejecting God.

Cornelio asked: “Do you think for ordinary Filipinos they’re rejecting God by supporting Duterte? They’re not. People believe that Duterte is exactly appointed by God. That changes everything. So people are not rejecting God.”

“Implicitly,” he said, Filipinos might have thought that choosing Duterte’s candidates is in fact choosing God. 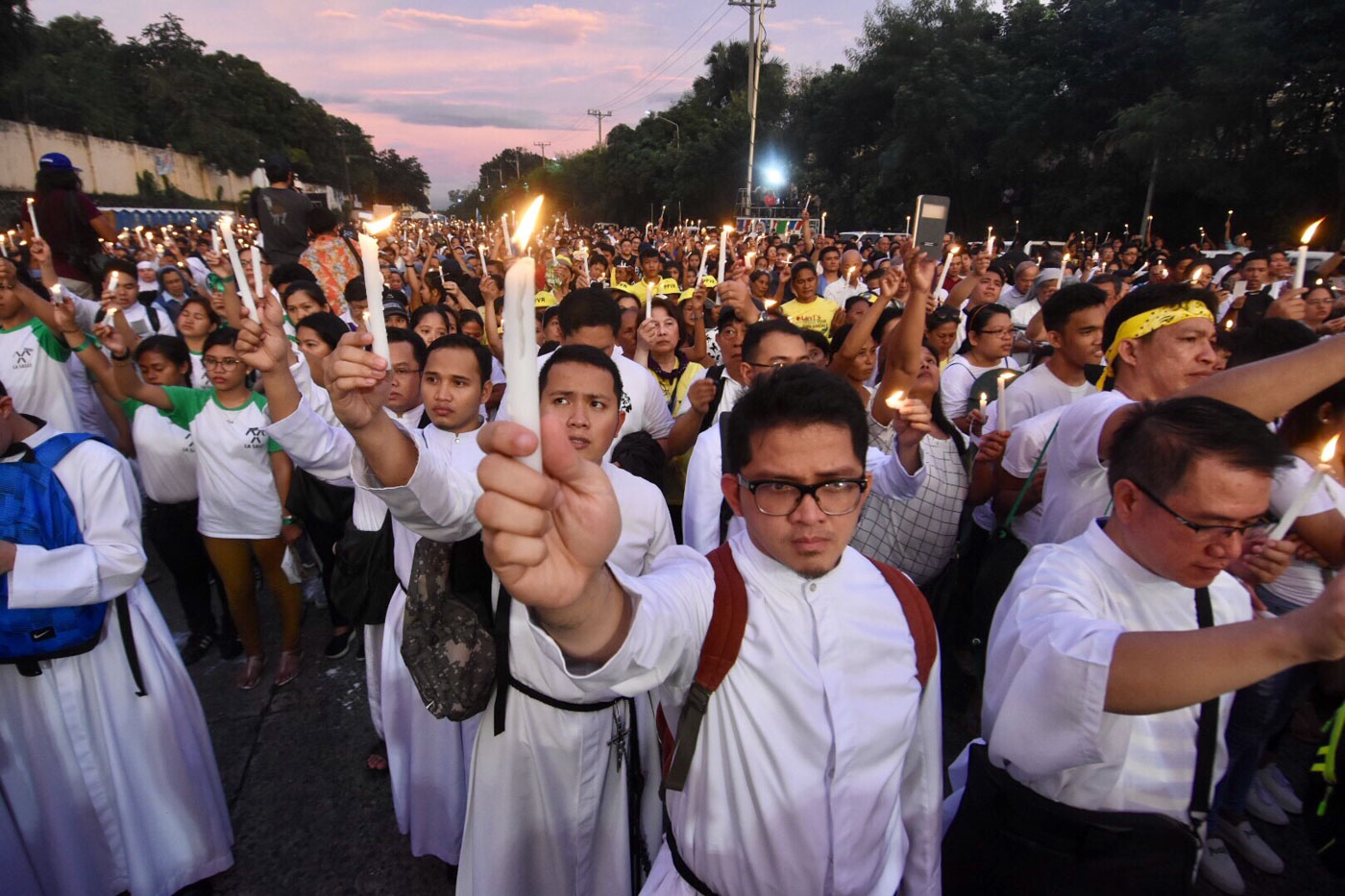 He said Villegas’ preelection video might have worked “for certain groups of people,” but those groups “might be your echo chamber already to begin with.”

When asked what he could have done if he were in the place of Villegas, Cornelio answered: “Based on my experience and my understanding of Filipno sensibilities, get people to reflect. Ask people questions, deep questions. Don’t even try to answer those questons. Make them think.”

Wrong view of God as ‘Punisher’

Support for Duterte in this predominantly Christian country puzzles even foreign observers.

This is consistent with Duterte’s image as “The Punisher,” a longtime Davao City mayor who said he is willing to kill, personally, to stop crime in the country.

(Duterte himself was raised in a household of punishments. His mother Soledad Duterte, a devout Catholic, had forced him to kneel on mongo seeds in front of the altar, or had locked him out of their house whenever he came late, forcing him to sleep outside.)

This also reflects the way Catholicism has been practiced in the Philippines for the past 500 years – instilling more the fear of hell than the promise of heaven; more focused on the suffering Christ (like the Black Nazarene) than on the Risen Savior (as when Good Friday is highlighted more than Easter, the central feast of the Christian faith). 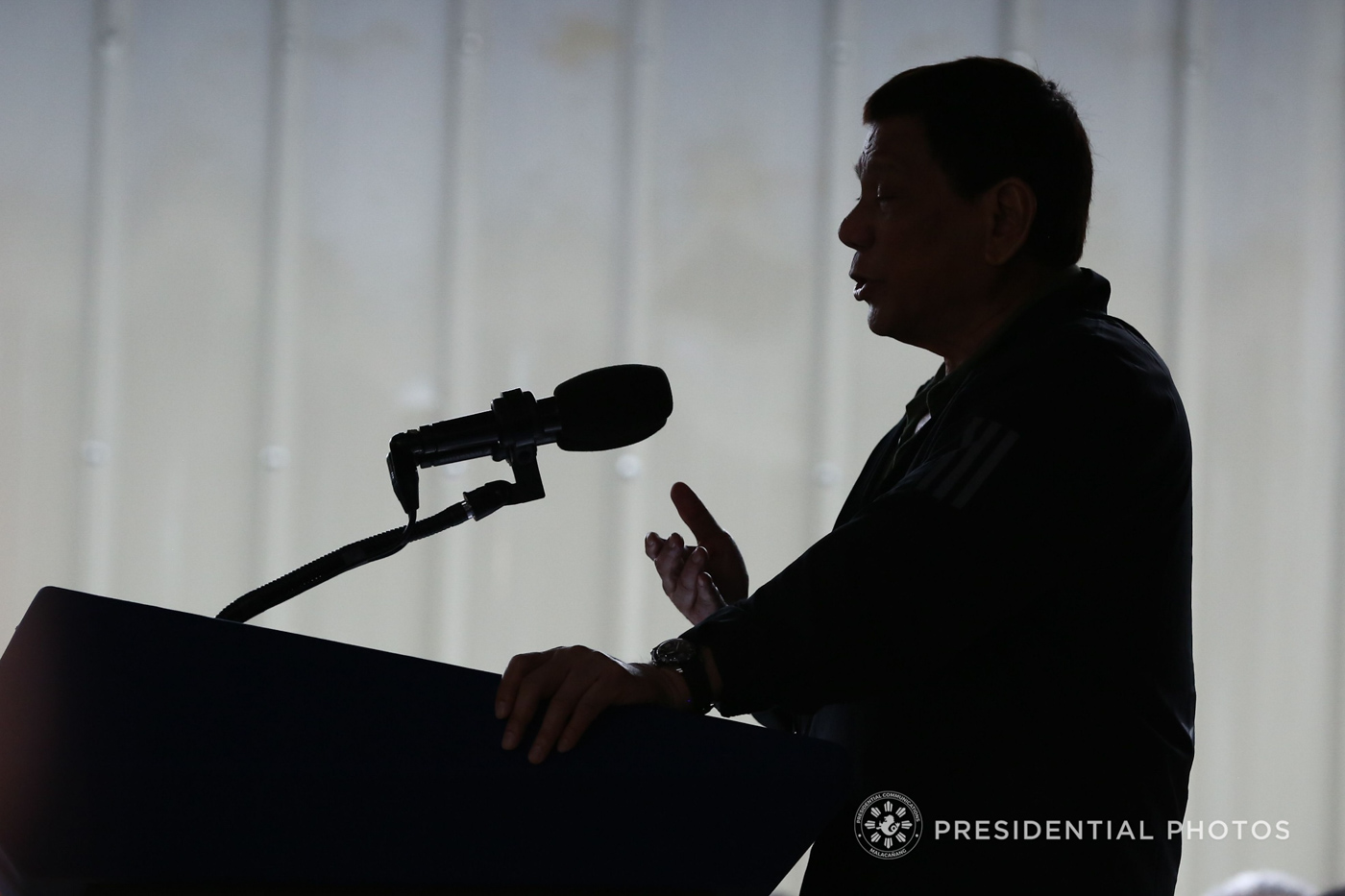 Referring to Duterte, Obico added: “Many Catholics support him because he embodies, even if unconsciously, their idea of God: someone capable to free them hic et nunc (here and now) from evil and the wicked, rather than saving the sinners. This kind of vision shows a lack in the faith of God as revealed by the Gospel, who doesn’t condemn but loves and who, with his infinite mercy, has the power to change the heart of man.”

“God is a Redeemer, not an avenger,” Obico also said in his Vatican Insider interview. “The Philippines should change their idea about the nature of God, who in His infinite mercy, can only wish for the salvation of the whole humankind.”

In a Thought Leaders piece for Rappler, Manila Auxiliary Bishop Broderick Pabillo once asked, “Why did God give us Duterte?”

Pabillo said: “God did not give us Duterte to be our President. The 16 million voters chose him to be President and he is now President. But God can write straight with crooked lines. Even from something bad, good can come out.”

Who is Duterte’s God?

As he marks his midterm on Sunday, June 30, Duterte has 3 years to go.

He will still be President when Christians mark the 500th year of the arrival of Christianity in the Philippines on March 16, 2021.

Duterte said he is not keen on celebrating this. “The Church centennial now, 500 years of Christianity, really? What’s so special?” he said in an interview Pastor Apollo Quiboloy, the self-proclaimed “Appointed Son of God.”

Duterte added, “I celebrate the start of the subjugation of my country for 400 years? You must be kidding.” 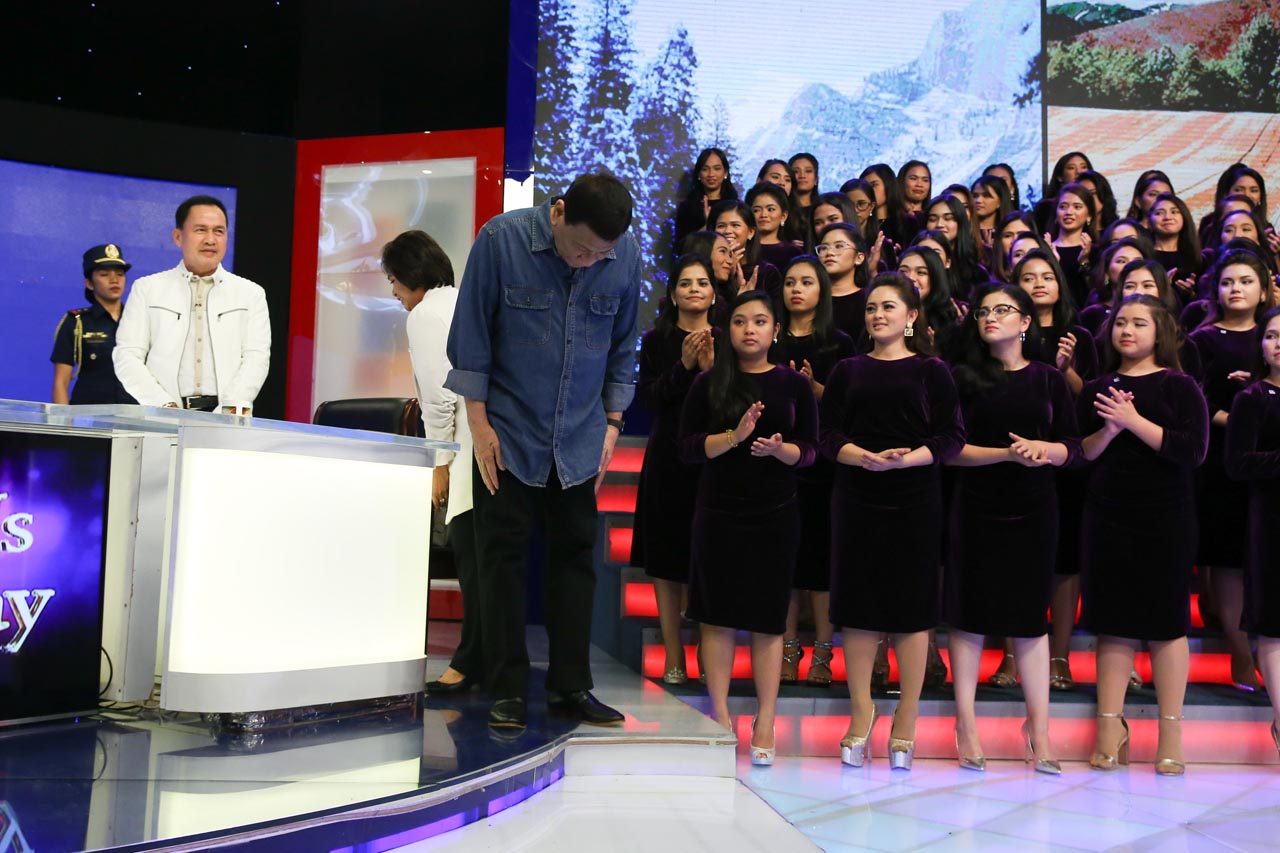 But who really is Duterte’s God?

It is helpful to view the bigger picture – how populist leaders like Duterte build personality cults around themselves.

Alexander Hurst said in an article on the New Republic:

Personality cults are a hallmark of populist-autocratic politics. The names of the various leaders are practically synonymous with their movements: Le Pen, Farage, Duterte, Orbán, Erdogan, Chávez, Bolsonaro, Putin. Or if we were to dip farther back into history: Castro, Franco, Mussolini, Hitler, Stalin. Like religious cult leaders, demagogues understand the importance of setting up an in-group/out-group dynamic as a means of establishing their followers’ identity as members of a besieged collective.

“Kayong mga Katoliko, kung naniniwala kayo sa mga pari pati obispo, doon kayo. Kung gusto ‘nyo mapunta ng langit, doon kayo. Ngayon, kung gusto ‘nyong matapos ang droga pero magpunta ako sa impiyerno, sumabay kayo sa akin,” the President once said. (You Catholics, if you believe priests and bishops, go with them. If you want to go to heaven, go with them. Now if you want to eradicate drugs even if I will go to hell, then come with me.)

One of his other speeches revealed more of The Punisher’s mindset. In a September 2016 speech, Duterte claimed the 2,000-year-old Catholic Church would become irrelevant in 3 decades. He urged his followers to leave the Catholic Church.