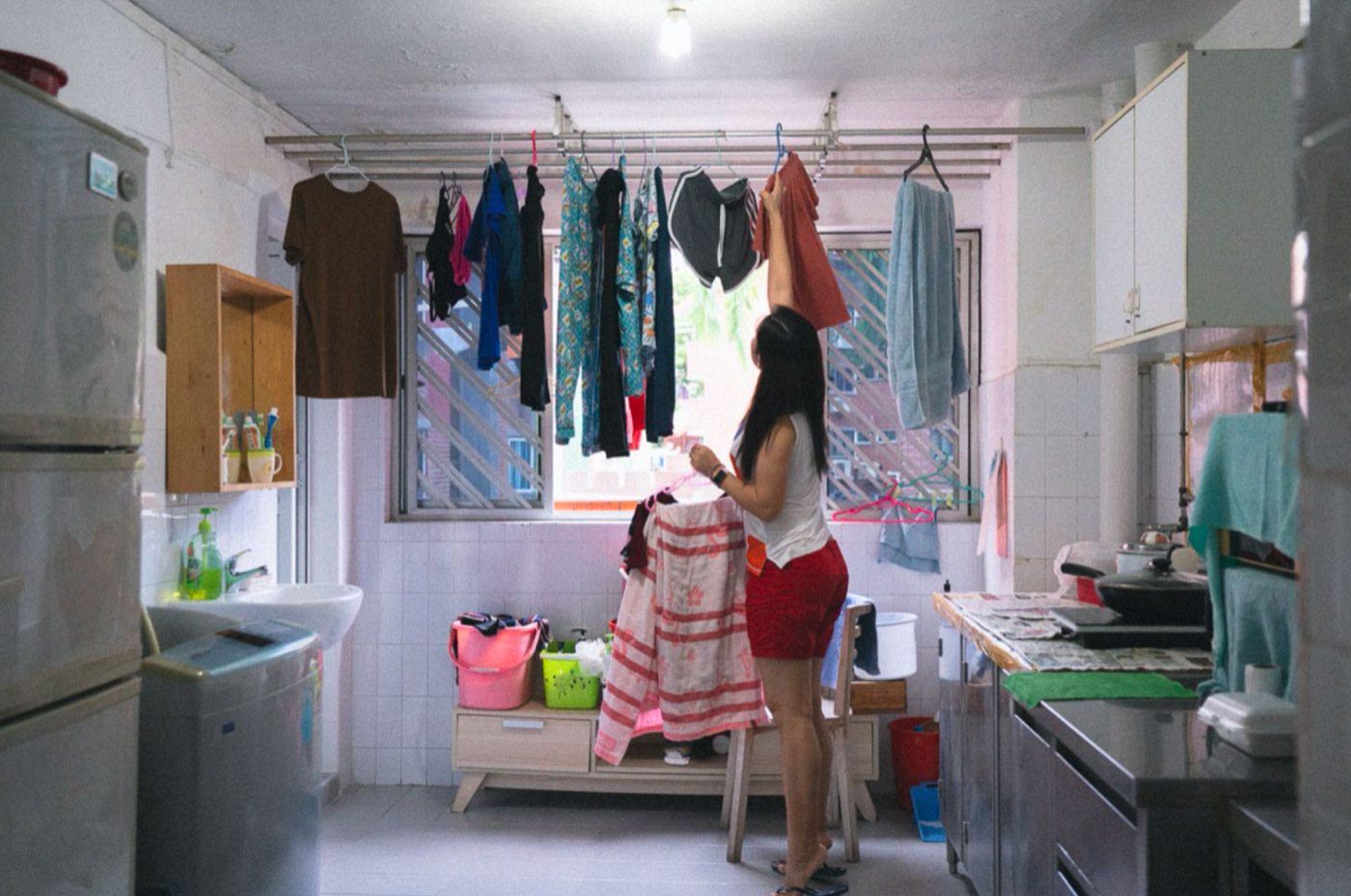 PROTECTION. Experts say the side benefits of the Household Services Scheme are higher salaries, stronger protections, and lower chances of abuse for cleaners than maids.

Poe Ei San, 25, a Burmese migrant, could not find work as a nurse in affluent Singapore. So she cleaned houses instead.

Every day, the Yangon University graduate washes toilets, scrubs floors, and wipes down kitchens. “Because of the low pay and instability in Myanmar, many young people look for jobs overseas,” she said.

Poe is among a small but growing number of home cleaners under the Household Services Scheme (HSS), a five-year-old program that allows companies to hire migrant workers from countries including Myanmar, Thailand, India, and Sri Lanka to provide part-time cleaning services to households.

The scheme is primarily designed to meet the demand for part-time help, and by extension reduce Singapore’s reliance on live-in foreign domestic workers, called maids.

Singapore’s maid population grew about 40% in the past decade, with over 250,000 maids in the city-state as of 2018. “It is not sustainable for the population of foreign domestic workers to grow unchecked,” the Ministry of Manpower (MOM) had said.

Over the years, Singapore’s 1.4 million households have come to depend heavily on maids for chores, cooking, and caring of elderly, children, and pets. These maids come mostly from poor Asian countries and do not enjoy the same pay and privileges given to Singaporean workers.

The HSS scheme is different. By formalizing domestic work, it gives cleaners better pay and rights that maids currently don’t have.

Amid a maid shortage caused by tightened borders from COVID-19, Singapore on September 1 made the HSS permanent and expanded its scope beyond house cleaning to include more part-time services, such as grocery shopping, car washing, and pet sitting, the MOM said on August 23. It also allowed firms to hire cleaners from Cambodia. HSS cleaners now serve over 10,000 households.

Dominic Lim, sales and marketing manager of cleaning firm Fresh Cleaning, added that there’s good awareness in the Burmese community of a cleaner job as an alternative to being a maid. Myanmar is a significant source for maids for Singapore.

Unlike maids, HSS cleaners serve multiple homes, live in their own accommodation, and are protected under the Employment Act, which dictates a maximum of 44 working hours a week, at least 1.5 times overtime pay, seven days of annual leave, 14 sick days, and a rest day a week.

Maids are governed under regulations that call simply for “acceptable” accommodation and “adequate” rest. The MOM, which declined interviews, said on its website that it is “difficult to enforce the terms of the Employment Act for domestic workers as they work in a home environment and the habits of households vary.”

Experts say the side benefits of the HSS are higher salaries, stronger protections, and lower chances of abuse for cleaners than maids. However, these benefits are limited by the small number of cleaners, which Helpling’s Zhong estimates at just 1,000 to 2,000. There are no official statistics.

Furthermore, the HSS does not address perceptions of migrant workers as inferior and of domestic work as lowly, which are core reasons for domestic worker abuse. As a result, cleaners, just like maids, are still at risk.

As of 2019, 1 in 5 Singapore households employs a maid, up from about 1 in 13 three decades ago. For the wealthy nation’s largely dual-income families, maids are a popular way to outsource household duties so women can work.

But tightened border controls brought about by COVID-19 have restricted maid inflow and caused an uptick in demand for part-time cleaning, four cleaning companies interviewed said. According to former manpower minister Teo, the number of companies on the HSS jumped from 50 in 2019 to 76 in 2021.

Another cleaning firm, United Channel Construction & Facility Services, whose clients are mostly condominium-dwellers, said some customers book cleaners as often as five days a week. The firm, which also runs a maid agency specializing in Burmese maids, said several customers who hired part-time cleaners while waiting for maids to be available have since become converts. They like having their homes to themselves, without needing to allocate food and board for an additional person, said manager Flora Sha.

But while the pandemic has bumped up demand for part-time cleaning, most companies agreed this will end once borders open and maids – or illegal cleaners from neighboring countries – return, effectively halting any potential that the scheme could improve domestic worker welfare at scale.

Already, a pilot scheme to increase the supply of maids has been launched, with the first batch of over 100 maids to arrive in Singapore in August; some 2,000 households have expressed interest.

Tan Hui Bin, operations manager of cleaning firm A1 Facility Services, said raising maids’ salaries could be an effective way to maintain demand for HSS cleaners, as the price difference is less. Companies offer part-time home cleaning at around S$20-$25 ($15-18) an hour, with slots ranging from two to eight hours.

While maids have a fixed salary, cleaners’ salaries comprise basic pay, allowances for food and transport, overtime pay, and incentives. As a result, their total pay can be double or triple that of a maid’s.

“The cost of a part-time cleaner is still quite high compared to a live-in helper, which I’ve raised in Parliament,” said Member of Parliament Louis Ng. “We need to level the playing field, which is why I’m calling for cleaning subsidies similar to those for maids, where households with elderly and children pay less.”

A spokesperson for welfare group Humanitarian Organization for Migration Economics (HOME) said there is “no way” HSS cleaners can replace maids, as Singaporeans are “accustomed to enjoying help from domestic workers in multiple roles – babysitting, pet sitting, cooking, housekeeping, car cleaning – for a very low fee.” Singapore’s median household income in 2020 was S$7,744 ($5,700) a month.

Though unintended, one major benefit of the HSS model is the lower risk of abuse. Law experts and welfare groups said the HSS eliminates the live-in factor that leaves maids vulnerable to abuse, as they can be isolated and denied access to a phone.

Living separately from the families they work for also results in fewer opportunities for ill-treatment and abuse of cleaners, added Singapore Management University associate professor of law Eugene Tan. With a clearer distinction between their residence and place of work, the rights, welfare and interests of cleaners can be better safeguarded, he added.

Maid abuse in Singapore has been in the spotlight in recent years following a series of high-profile cases, the latest being the death of 24-year-old maid Piang Ngaih Don. Between 2017 and 2020, there were about 270 police reports of maid abuse every year.

It’s a job hazard university graduate Poe is well aware of, having read the news in February of Piang’s death. The maid endured 14 months of torture and starvation: she was burned, beaten, and choked, lost 15 kilos, and on her final nights slept on the floor chained to a window grill.

Poe was working as a waitress in a hotel in central Myanmar and making plans to get a job in Singapore when she saw the headlines. “I didn’t want to be a maid after that,” she said. “Nobody will know if your employer bullies you.”

But despite improved working conditions, HSS cleaners are still subject to unscrupulous employers, HOME’s spokesperson said. The organization helps about 10 to 20 cleaners a year on issues like overwork and not receiving salaries.

She added that abuse of domestic workers and cleaners stems from attitudes that devalue domestic work and see migrants as inferior.

“Many employers feel migrant workers should be grateful that they’re getting a job. There’s a sense of ownership of the worker,” she said. “Abuse arises because employers devalue both domestic work and the domestic worker.”

Cleaning firms interviewed said they haven’t seen cases of physical abuse, though some say verbal abuse happens. There are about 700 customers on Helpling’s blacklist for abusive behavior and failure to pay bills, while United Channel said 30% of customers shout at cleaners.

Due to their reduced isolation, cleaners may experience less abuse than domestic workers, HOME’s spokesperson said. But one way to eradicate abuse is to dignify household work.

To do this, people must see the value of such work in helping society run smoothly. Amid the maid shortage, some Singaporeans have realized how dependent they are on their domestic workers, she added.

The MOM said it will assess if the scope of services for the HSS can be further expanded in the future. Earlier this year, former Manpower minister Josephine Teo said caregiving could be one such service – but there are concerns from some quarters about the risk of abuse.

Margaret Thomas, president of the Association of Women for Action and Research, said domestic workers taking care of the elderly are often overworked and vulnerable to abuse from their charges, especially those with dementia.

Despite these warnings, Poe is excited about the possibility of caregiving gigs. She still dreams of becoming a nurse and hopes some caregiving experience will help her secure a job at a Burmese hospital when she returns home.

“I know the elderly might abuse me, but I’ll be patient with them,” she said. “Under HSS, the company is responsible for staff, so I’m confident it’s still better than being a maid.” – Rappler.com

This story was supported with funding and training by the Friedrich Naumann Foundation for Freedom.