In Duterte’s 2021 budget, Filipinos are on their own 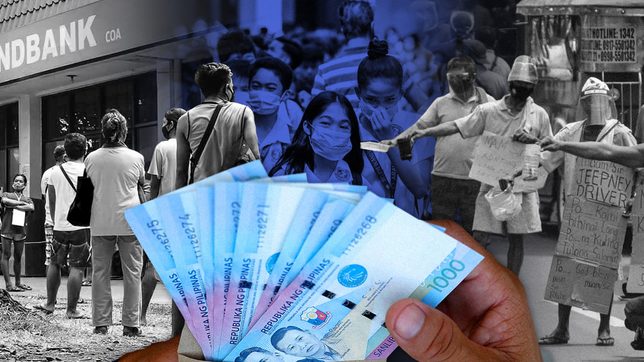 Boyet Alba, 32, used to drive a jeepney around University of the Philippines-Diliman in Quezon City, taking home around P800 on a good day.

It’s been half a year since he last drove his jeepney due to the lockdown, coupled with the government’s efforts to modernize the transportation system.

Within the last 5 months, his family accumulated close to P50,000 in loans, with him wondering each day how they would be able to pay up. They’re saving every peso they can from the P8,000-cash aid they received from the government.

In July, his wife started working as a janitress in a hospital in Quezon City. Earning minimum wage, it was enough to feed their family of 6 twice a day, but wasn’t enough to support their children’s schooling. Because of the pandemic, schools have shifted to distance learning.

“Hindi ko nga alam kung paano ‘yun eh. Kung online, gagastos pa para sa wi-fi. Patitigilin muna nang isang taon sila,” he said in a resigned tone. (I don’t know what to do. If it’s online learning, we have to spend for wi-fi. So we decided that they’d have to stop going to school for a year.)

Boyet’s wife had to take over as breadwinner, as the future of driving jeepneys remained uncertain. On top of reduced capacity for public transportation, only over 17,000 of around 55,000 traditional jeepney drivers in Metro Manila were allowed to hit the road starting July.

Many jeepney drivers have resorted to begging on the streets, while those who protested against the policy were arrested and had to briefly stay in jail.

Even if Boyet was allowed by the government to drive again, his route may not be as profitable as it used to be, given the one-meter distancing rule in public transportation. UP-Diliman has also announced that classes will be done remotely.

“Wala na, parang ayoko na nga mag-jeep. (I don’t want to drive a jeep anymore),” he said, as if he had come to terms with his decision. “Kahit family driver na lang sana. (Maybe I’ll apply as a family driver),” he added.

Boyet is just among the millions of Filipinos who struggle to make ends meet because of the pandemic. Even though the government expects jobs to be back in 2021, millions more will slide down to poverty. The projected poverty rate will range from 15.5% to 17.5% in 2021 from 16.6% in 2018 – higher than the economic team’s aim of bringing poverty down to 14%.

Health experts said that the coronavirus will stay until 2022, but the government has so far earmarked only around P90 billion for pandemic efforts in the proposed budget for 2021. The threat of cases surging again is still there, as cases have yet to significantly decrease. So far, the Philippines is reporting an average of 2,000 to 3,000 new cases daily.

Because of the Bayanihan to Heal as One Act, the Department of Social Welfare and Development’s budget went up to an adjusted P366.5 billion, including the funds released under the unprogrammed funds in the 2020 General Appropriations Act (GAA). From the adjusted program, close to P200 billion was allocated for the cash aid program for 18 million Filipino families.

In the Bayanihan to Recover as One Act, also known as “Bayanihan 2,” another 6 billion would be released to DSWD for food and livelihood assistance to areas under lockdown.

While the legislature acted swiftly to pass the Bayanihan 1 and 2 laws, the executive took months before the first tranche of the cash aid was fully released. When the DSWD started disbursing the second tranche, the number of beneficiaries was downsized from 18 million to 14 million households.

The DSWD saved some P10 billion from the questionable effort – angering groups and lawmakers who said that the department should have just released the money to those in need.

For 2021, the government did not propose an unconditional cash grant program, leaving the DSWD with fund allocations for its usual programs, pre-pandemic.

The DSWD is proposing a P170.99-billion budget for next year, which is about P7 billion higher than its 2020 GAA budget. But if this is compared to its P366.5-billion adjusted budget this year, the proposed DSWD spending plan for 2021 actually reflects a huge decrease of P195.5 billion.

Lawmakers said that the DSWD should have a bigger budget, especially in the context of the pandemic. The proposed funds, according to Senate Minority Leader Franklin Drilon, appeared to have been crafted “as if the country is not facing a pandemic.”

The government did not prepare for a scenario involving cash grants to workers, jeepney drivers, and small businesses for 2021 as well.

Instead, the Department of Budget and Management approved a minimal increase for emergency employment – particularly DOLE’s TUPAD or Tulong Panghanapbuhay sa Ating Disadvantaged/Displaced Workers – from its P6.79-billion appropriations in 2020 to P9.94 billion for next year.

Under the Bayanihan Act, the Department of Labor and Employment’s budget was adjusted to P23 billion, but another P13 billion would be released for cash-for-work programs, assistance to displaced workers, and overseas Filipino workers hit by the pandemic from the Bayanihan 2 law. That’s equivalent to a total P36-billion budget for this year alone.

In 2021, the DBM approved a P27.01-billion proposed budget for DOLE and its attached agencies – an amount which is not even half the P61 billion that DOLE had proposed.

DOLE Director Warren Miclat admitted that their proposed funds won’t be enough to cover their identified beneficiaries in the formal and informal sectors. Based on the labor department’s figures, the P9.94-billion TUPAD funds can only reach about 2 million Filipinos of the 3.2 million workers hit by the pandemic.

From DOLE’s proposal, Miclat said that at least P40 billion should have gone to an enhanced emergency employment and cash aid program and a new program supposedly hiring nurses in rural areas. But these were thumbed down by the DBM.

The education sector received the biggest share of the P4.5-trillion budget, but the Alliance of Concerned Teachers (ACT), a group of teacher unionists, cautioned that at least 4 million learners are at risk of being left behind because of the poorly funded distance learning program.

ACT urged the government to provide teachers and poor students with laptops and tablets, and internet allowance of at least P1,500 to cope with the digital shift.

Because of the pandemic, the start of classes was pushed back to October 5 and the Department of Education was forced to shift to modular learning, to be supplemented by broadcast and online classes.

Modular learning was expected to fill in the gaps, given the lack of access to gadgets particularly in low-income households. But there were not enough funds even for the printing of modules so that schools had to start donation drives for bond paper and printers.

In 2021, the Department of Education is proposing at least P568.66 billion. Though its flexible learning program increased by P14 billion in 2021, in addition to the P5 billion that could be tapped from unprogrammed funds, Education Undersecretary Anne Sevilla appealed for an additional P10 billion for the program. At least P35 billion is needed for the printing of modules, according to the education official.

The remaining funding requirement, according to Sevilla, could be sourced from the Special Education Fund, which comes from local government’s tax proceeds, and the Brigada Eskwela, the annual repair volunteer program where schools ask for donations for supplies and materials. Still, lawmakers found it “worrisome” that these important expenditures were not budgeted in the proposed fiscal plan.

Another point of contention is that teachers’ cash allowance for supplies remained at P3,500 – which is an insufficient amount, given the expenses for gadgets, internet, and electricity as teachers work from home.

The digital shift also haunts state universities and colleges (SUCs). Under the Bayanihan 2 law, P3 billion will go to SUCs for their investments in information communication technology (ICT) capabilities, but Commision on Higher Education (CHED) Chairperson Prospero de Vera said that this amount will only “establish” the foundation of smart campuses.

CHED is set to receive at least P49.6 billion next year, but its proposed budget has no follow-through for the investments in ICT in 2021. To compare, the Philippine National Police has a P111.22-million budget for their “smart camps” while CHED doesn’t have any for smart campuses.

De Vera also acknowledged that the P3-billion fund could not be equally distributed, given the lack of access to internet connectivity in areas where some SUCs may be located.

Furthermore, the National Broadband Program of the Department of Information Communications Technology (DICT) only received P902 million in proposed allocations for next year, dwarfed by the multibillion investments in road infrastructure.

DICT said that at least P17 billion is needed to fast-track the implementation of the broadband program, if they are to cover areas that are yet to be connected to the digital infrastructure.

Consistent with the government’s policy, there won’t be cash grants for farmers and fishermen under the Department of Agriculture’s (DA) budget. Instead, DA Secretary William Dar is pushing for a higher budget for modernization.

DA has a proposed budget of P63.96 billion in 2021, but Dar said the department originally requested for a P284-billion budget from the DBM to fund the following programs:

According to DA, at least a P100-billion budget is needed to grow the sector’s contribution to the country’s gross domestic product.

Despite the coronavirus lockdowns, the agriculture sector grew by 0.5% during the second quarter, which covered the months of April to June. The World Bank also said that transforming the Philippines’ agricultural sector is “key” to speeding up the country’s recovery.

In April, economists from the Ateneo de Manila University found that every billion worth of new investment in the agricultural sectors could potentially bring back 16,000 new jobs among the poor.

For Dar, there’s no way to go but up in the agricultural sector. Investing more in the sector, he said, as he appealed for a higher budget, would promote food security and livelihood.

The ball is in Congress’ court

Given the skewed priorities of the Duterte administration’s penultimate budget, it’s now up to Congress to reallocate funds based on the people’s needs.

At the House plenary on Monday, September 28, House appropriations panel vice chairman Joey Salceda, who defended the general principles and provisions of the 2021 budget, argued that the amounts for social protection and welfare in the proposed fiscal plan are “enough” to help the economy grow. Some groups and experts, however, disagree.

Sylvia Claudio, UP-Diliman dean of the College of Social Work and Community Development, said that the 2021 budget should have more funds for social protection to cushion the impact of the pandemic. And one way of doing this is to include funds for unconditional cash transfers.

As Congress cannot increase the budget ceiling of P4.5-trillion, a main source of possible realignments could be the P666-billion budget of the Department of Public Works and Highways.

But will lawmakers yield? As early as now, some congressmen were already up in arms against House Speaker Alan Peter Cayetano – triggering the speakership row – over the “inequitable” distribution of infrastructure funds.

Salceda had given assurances that the leadership will address the gross disparity in infrastructure fund allocation among congressional districts through the “core principle of fairness.”

The lower chamber is targetting to pass the 2021 budget before Congress goes on break in October. The Senate, meanwhile, targets to finish all hearings at the commitee level before the break, and start with the plenary debates when it returns in November.

As both chambers of Congress prepare for amendments in the 2021 General Appropriation bill, here are some questions:

Right now, we’re at a wait-and-see mode. – with reports from Colene Ruth Abiog/Rappler.com

Coleen Ruth Abiog is a Rappler intern. She is a journalism student at the University of the Santo Tomas.