Principles and compromises: How Makabayan survived under Duterte 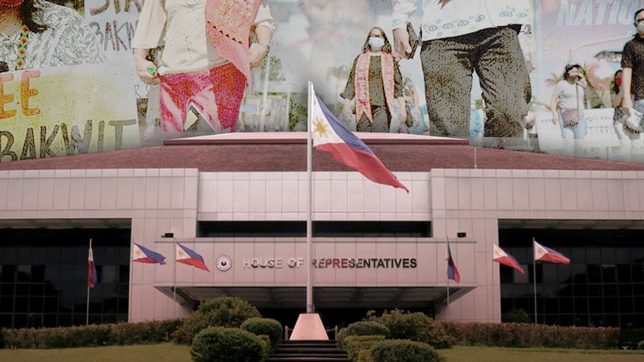 Facebook Twitter Copy URL
Copied
The Makabayan bloc has not always been critical of President, but it recalls its alliance with him: ‘Nanloko si Duterte’

As their allies face deadly attacks outside, lawmakers belonging to the Makabayan bloc face a war of their own at the House of Representatives.

All of its members have been red-tagged by the Duterte government – a label spread a thousand times by an online disinformation machinery that thrived under the administration of a self-confessed “socialist president.”

The conflict came to a head in November 2020, when the Senate national security panel, led by former police chief Senator Panfilo Lacson, launched a probe into the Duterte government’s red-tagging practices, but which turned into a forum to confront Leftist lawmakers.

In the hearing, the government’s generals – the nemeses of the Left – spent hours red-tagging the Makabayan bloc, which counts among themselves the representatives of Bayan Muna, Gabriela Women’s Party, ACT Teachers, and Kabataan Partylist.

The generals brought former activists, who accused Makabayan lawmakers and their colleagues of supporting the armed movement. The Makabayan bloc denied the claims.

In House hearings, the Makabayan bloc often found itself alone in opposing the bills passed by the supermajority and in calling for probes into questionable projects of the Duterte government.

How are they surviving?

The progressive bloc has played the politics of principles and compromises to survive, based on interviews Rappler had with their members and with experts who have been watching Congress closely.

Makabayan and the President

Makabayan has not always been critical of President. Leftist organizations supported Duterte’s presidential campaign, coming from their mutually beneficial relationship in Davao City when Duterte was mayor.

In 2016, then-presidential candidate Duterte spoke of policies that sounded sweet to the progressives: the continuation of peace talks with the communists, the release of political prisoners, an independent foreign policy, and the end to contractualization.

Duterte even declared himself a leftist, and the “idol” of the New People’s Army. “The Reds would never demand my ouster. They will die for me, believe me,” Duterte said in December 2016.

“We recognize such victory as an expression of popular outrage over and rejection of the regime of ‘daang matuwid‘ and a cry for sweeping change in the elitist and anti-people system,” Makabayan said in a statement on May 15, 2016.

Duterte appointed key people from the progressive bloc to his Cabinet. At the House, the hopeful Makabayan bloc joined Duterte’s supermajority.

Even after dozens of Filipinos were killed in the administration’s anti-drug campaign, and even after Duterte allowed a hero’s burial for dictator Ferdinand Marcos in November 2016, the Makabayan bloc held on, although they condemned these Duterte decisions in statements they released.

“Makabayan supports the pro-people pronouncements and policies of President Duterte, specifically with respect to the peace talks and release of political prisoners, as well as an independent foreign policy. Insofar as Malacañang has taken positive steps on these issues, our support remains,” then ACT Teachers Representative Antonio Tinio said in a text message to Rappler after Marcos’ burial.

The fallout snowballed shortly after.

The peace talks failed. Crossfires continued between the Philippine military and the communist rebels. Then, the Makabayan bloc-supported Cabinet members faced back-to-back rejections at the Commission on Appointments. Duterte just shrugged these off.

The Makabayan bloc dropped Duterte on September 14, 2017, saying his administration “fully unraveled as a fascist, pro-imperialist, and anti-people regime.”

“Nanloko si Duterte (We were tricked by Duterte),” Bayan Muna Representative Carlos Zarate told Rappler in an interview in September 2021, looking back.

But Zarate said they did not regret the alliance. They believe they represented the pulse of the people at the time, when they were excited for “change” to come.

“We couldn’t just say ‘Oust Duterte,’ that is not the pulse of the people. We will be isolated,” Zarate said.

The Makabayan bloc was also proud of passing laws during its alliance with the administration, like Republic Act 10931 or the Free Tuition Law.

Since the fallout, both the Makabayan bloc and Duterte have been relentless against each other.

It was not an even match, however.

The Makabayan bloc was only a handful of lawmakers. They pride themselves in their grassroots organizations, but they were simply overpowered.

Within years, Duterte established the National Task Force to End Local Communist Armed Conflict (NTF-ELCAC) , signed a document classifying communists as terrorists, and signed the anti-terror law – all of them used to threaten and intimidate Makabayan and its base.

In a Rappler Talk interview, Makabayan chairman Neri Colmenares pointed out that they had been standing with the administrations then abandoning ship after disappointment since the presidency of Gloria Macapagal-Arroyo.

He pointed out, however, that the “honeymoon” was the shortest with Duterte, and the antagonism after remained to be unmatched.

Makabayan and the minority

Even dissenters at the House were fractured.

House rules require that the minority be recognized by the majority, thus leaving it with lawmakers who are still largely supported the agenda of the Duterte administration. Dissenters cannot form the minority bloc on their own without getting the nod of their colleagues who were close to the President.

Minority offshoots emerged. Most prominent of them is the so-called “independent minority” of Albay Representative Edcel Lagman, and the rest of the so-called “Magnificent 7” lawmakers during the early part of the Duterte government.

The Makabayan bloc also stood on its own during the 17th Congress, refusing to align itself with both the majority and the minority.

This proved to be unsustainable. Being a member of the majority meant holding key seats in the House. Minority lawmakers at least were given seats in committees so they could take part in the lawmaking process. Refusing to sit with these blocs meant losing these powers that would make them effective lawmakers.

“They are giving up some extent of freedom. Because, you know, when you belong to an institution, you cannot freely articulate or express or represent differing views because you have to remember that there is some sort of fellowship even in this kind of co-opted minority,” Lagman said in an interview with Rappler.

Makabayan believes it did not need to compromise under new House leadership.

“We made the most out of it…There are more advantages to us than being outside the so-called institutionalized minority,” Zarate told Rappler.

This was noticed even by their colleagues in the majority.

Makabayan chairman Neri Colmenares added that they had found themselves serving as the voice of the marginalized sectors, as the party-list system in the Philippines has allowed for political dynasties to field relatives as party-list nominees.

“It’s really frustrating for us, especially now that they don’t need to pretend that they are for the marginalized and underrepresented,” Colmenares said.

Aside from gaining seats in committees, Zarate was named Deputy Minority Leader, allowing him to sit and interpellate in all House committee hearings.

Zarate said they were invited to join the minority as early as after the takeover of Gloria Macapagal Arroyo as House speaker in 2018, but they did not trust her minority leader at the time, Quezon 3rd District Representative Danilo Suarez.

Abante even had the budget of the NTF-ELCAC deferred during the 2020 deliberations and called for its budget to be spent elsewhere during the budget talks in 2021.

This is the same Benny Abante who was for the reimposition of the death penalty and was against LGBTQI+ equality – issues on which Makabayan disagrees with him vehemently.

“If there were matters that we cannot resolve because we don’t want to take a stance with the minority, then we stood as a bloc, and that was fine with Abante,” Zarate said.

Zarate added that the Makabayan bloc did not hold the same influence as Lagman, who had become a respected figure in the House even without being a part of either the majority or minority.

He added: “This is the advantage on our part. We saw that we can push the envelope forward if we’re part of the minority.”

Why the Makabayan voice matters

All these efforts of the Makabayan were made to continue with their “pro-people” agenda – an agenda that the Duterte government sought to strike down in 2022 by associating them with armed rebels.

Is it important that the Makabayan bloc continues to serve in Congress? Their colleagues believe so.

“We have to get that out – the alternative or the opposing view. It is the essence of the democracy that we have. It is not really much about the freedom to do whatever you want to do. It is more about the expression of dissent,” said Muntinlupa Representative Ruffy Biazon, who is part of the majority.

The punishment for siding with Makabayan could also be consequential, but Biazon, in withdrawing his support for the anti-terror law when it was just a bill, found himself on the same side as the Leftist lawmakers.

As a result, Biazon was removed as the budget sponsor of the Department of National Defense and the Armed Forces of the Philippines – agencies he defended in the previous Congress, and agencies that were close to his heart as he belonged to a military family.

Lagman pointed out that, even if lawmakers were not red-tagged themselves, the Duterte government red-tagging Makabayan and activists meant the President red-tagged a part of their constituents.

“Although it does not affect me personally, it would affect the groups I associate with, like, for example, the group of the human rights defenders who are victimized by this red-tagging, and they are, so to speak, my constituents, even outside of my district,” said Lagman.

In an interview with Rappler, political science professor Edna Co said the Makabayan’s voice – its red-tagged voice of dissent – is important to any vibrant democracy.