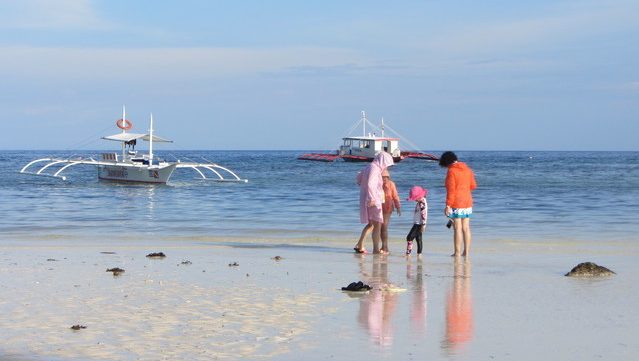 In the late ’90s, then 10-year-old Mark would troop to Panglao Island with his friends to catch damang, an indigenous fighting spider that proliferated in the once dense forests of the island.

But by the time Mark reached his 20s and once the resorts started mushrooming, the damang disappeared. This, however, gave way to a consistent source of income for Mark: driving tourists to Panglao onboard his tricycle.

Now 32, Mark has been frequenting Panglao to drive tourists who seek the island’s teal waters and sprawling beachfronts. He’s been at it for the last 15 years.

“I go back and forth from Tagbilaran Airport carrying tourists…around 6 times per day on peak seasons, 3 times when the tourists are few,” he explained while driving on the familiar stretch of paved road that connects Tagbilaran City and Panglao Island.

True enough, when Boracay closed last April 26, Panglao experienced a surge of tourist arrivals that bested its record last year in a matter of months.

The peak season in Panglao starts in October and lasts until February of the following year. Normally, tourist arrivals drop by June and plateaus until September, only to peak again in the 4th quarter of the year.

But in 2018, Panglao was able to exceed the previous year’s figures as early as May, the period when Boracay was closed.

Aside from the closure, Leonidas Senica of the municipal tourism office said this might have also been driven by other factors: the municipality’s tourism campaign that is aligned with the opening of the new international airport. (READ: New Bohol ‘eco-airport’ to be completed in October 2018, says DOTr)

This is the highest recorded number of tourist arrivals in Panglao in 10 years. The municipality anticipates it would double by yearend. “As per our observation, the number of tourists really increased,” Senica said, adding that Tagbilaran also experienced an upsurge.

In the past, Panglao was only a side trip for Filipinos visiting Tagbilaran’s Chocolate Hills and was a hideaway for European divers exploring the underwater rainforests of Balicasag Island.

But times are changing. Bohol has made Panglao its major tourism come-on and the drive has created an impact on the whole province. In 2016, Bohol reached 1,000,186 arrivals, which increased to more than 1.3 million in 2017.

But Panglao has something that Boracay doesn’t have: diving sites.

Since the ’80s, Panglao has been known as a diving site, beckoning to European divers to explore its spectacular coral reefs in Balicasag Island.

Banking on this, the local executives created the Coastal Resource Management Office (CRMO) through Municipal Ordinance No. 2, series of 2015, or “The Comprehensive and Sustainable Management, Development, and Conservation of the Fisheries, Aquatic and Coastal Resources in the Municipality of Panglao, Province of Bohol.”

Part of its mandate is to manage the marine protected areas in Panglao and impose a maximum carry-in capacity of 150 divers and 300 snorkelers per day in Balicasag Island.

The CRMO also implements an advance reservation system or queuing system that allows the office to limit and track visitors in Balicasag. “Now, you will notice that the demand is high. On several occasions, our reservation slots get filled up,” Senica added.

On the ground, Mark faces competition with tour agencies. He is among the 24 registered tricycle drivers for hire in Panglao who depend heavily on tourism.

“The number of tour agencies mushroomed,” he said. Nowadays, it’s common for his tricycle to share the road with closed air-conditioned vans with logos of tour agencies and big-named resorts.

“They are stealing our tourists. Now it’s harder to get tourists to hire us.”

But it’s not just the number of tour operators that increased.

The surge in tourism support facilities, and eventually, tourists, came after groundbreaking rites in 2013 of the Panglao International Airport – in the pipeline since 2010.

There has been an evident increase in arrivals starting 2014, as big chains of hotels and resorts with 400 rooms began to invest and operate in the municipality.

For the last 8 years, the streets, restaurants, and resorts were loaded with Chinese and Korean families, prompting a slew of Korean, Japanese, and Chinese restaurants along Alona Beach Road.

Since 2011, Panglao’s top foreign markets were from China, Korea, Japan, and Taiwan. Visitors from the United States, France, Germany, and Australia have been consistent as well. Russians have also entered the top foreign visitors list starting 2016.

Establishments and businesses have been steadily increasing over the years. Currently, 2,196 are registered with the Business Permits and Licensing Office (BPLO) as of April 2018.

These factors enable Panglao to depend on tourism as a major cash cow as it provides 80% of the municipality’s earnings.

Employment has also improved. From fishing, locals were able to penetrate the tourism market with support from the “Panglao First Policy,” an ordinance that prioritizes locals. 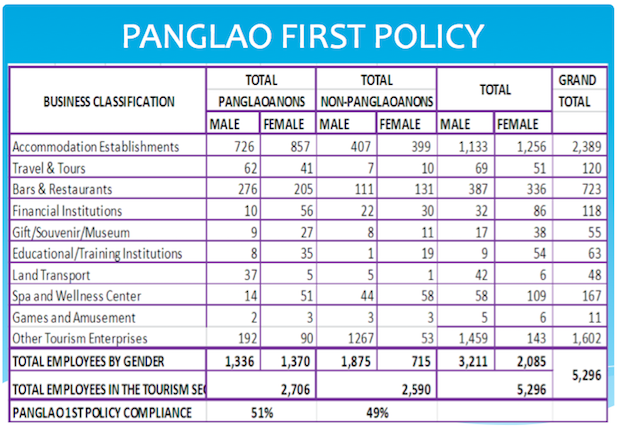 “The income is more consistent with tourism. Some fishermen started to work for resorts so the salary is consistent,” said Senica. “Some who own pump boats rent these out for island hopping, dolphin- and turtle-watching.”

Provincial figures agree: the poverty rate in the province decreased in 2012 and employment increased starting 2015.

There are also those, like Mark, who drive tourists to resorts on board tricycles. If one rents a tricycle around Panglao, the common rate is P1,200. The same tricycle will charge P1,500 if headed for other scenic spots in Tagbilaran and Loboc.

Mark also earns from driving tourists from Tagbilaran Airport to Panglao, which costs P300 one way.

Transportation costs around the island are also standard: P150 for tricycles and P50-P80 for habal-habals (motorcycles). Jeepneys are limited and the municipality has yet to open routes into its thin transport service system.

After decades of laboring as a tricycle driver, Mark was able to save enough to acquire and manage a small rice farm in Carmen, Bohol.

When Boracay closed, Panglao was among the tourism spots in the country that received warnings from the national government.

The reasons are the same as Boracay’s: unmanaged garbage proliferated on the shores and most establishments were without an environment compliance certificate (ECC).

The locals, however, are used to the trash. Every weekend, Mark brings his nieces and nephews to Panglao to bask in the afternoon sun as the young ones swim in the teal waters.

“The public beaches are dirty,” said Mark, who pointed out that a quick stroll includes a scenic view of the waves hitting the island’s white shores. But this is marred by sachets, plastic cups, beer bottles, and empty snack wrappers that litter the shores. – Rappler.com

To be continued: Part 2 | Garbage in paradise: The price of Panglao’s rise as tourist destination