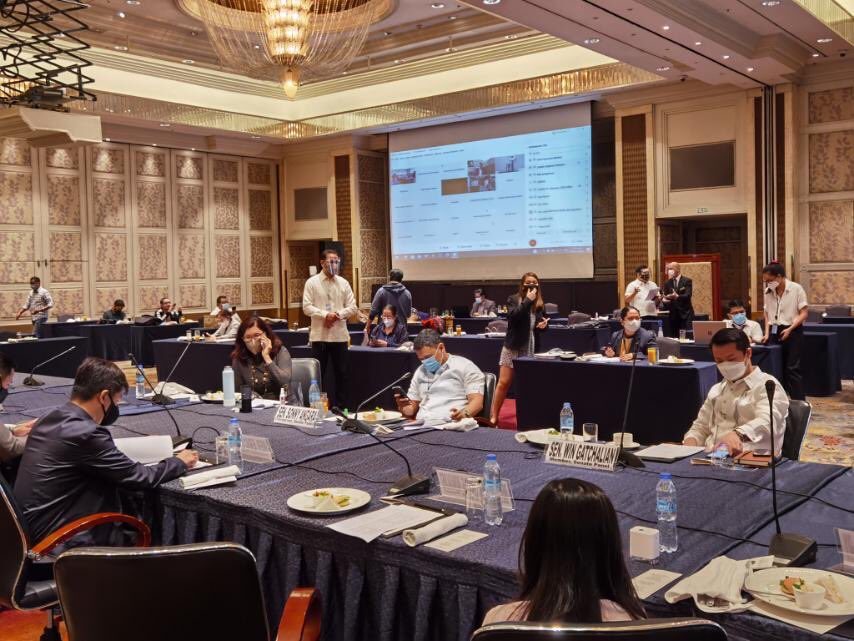 2021 BUDGET. Members of the Senate and House of Representatives meet for the bicameral conference committee on the 2021 budget.

President Rodrigo Duterte is set to review and approve the proposed P4.5-trillion 2021 budget but issues continue to hound the allegedly pork-riddled fiscal plan.

In a bid to support the unforeseen expenses of the coronavirus pandemic, the appropriations this year was mangled beyond recognition.

Despite that, congressional districts were still able to receive substantial amounts from the 2020 budget insertions.

The government tried to accommodate the lawmakers’ request – pushed by the House leadership led by then-House speaker Alan Peter Cayetano – by releasing at least half of these P280-billion “For Later Release” (FLR) allocations. The other half was lodged under the 2021 budget bill.

Critics and lawmakers raised other questionable infrastructure and development projects. For them, these have to be scrapped.

For years, lawmakers always said that Congress complied with the 2013 Supreme Court ruling which banned the Priority Development Assistance Fund or “pork barrel” by itemizing the projects or removing lump sum allocations.

Lawmakers who know better, however, did not mince words and said that congressional insertions – even those that were inserted early into the budget process – were equivalent to pork barrel funds.

The progressive Makabayan bloc had strongly opposed the Congress-ratified 2021 budget bill, which, they said, “boosts the funds for pork barrel, election war chest, and political repression of dissenters and ordinary citizens.”

Anti-pork advocate Senator Panfilo Lacson had earlier suggested that the supposed “errata” on infrastructure projects submitted by the Department of Public Works and Highways (DPWH) to Congress already contained projects that were initially not part of the National Expenditure Program (NEP). In short, these were alleged insertions even before amendments were introduced to the budget bill.

Lacson also raised hell against the P28.3 billion increase in the DWPH budget for 2021. From the original P666-billion DPWH budget under the 2021 NEP, the proposed public works funds in 2021 is now close to P700 billion under the budget bill.

Lacson said there are 793 infrastructure projects with an allocation of P1 million each. The senator had proposed a P68-billion decrease in the DPWH budget, but this was not accommodated during the bicameral conference committee.

“It begs the question: Is this an election campaign budget?” asked Lacson, referring to political posturing needed for the 2022 national elections.

Apart from what Lacson raised, the most apparent indicators of pork barrel were funds lodged under the FLR portion of the 2020 budget and the proposed 2021 GAB.

When the President signed the P4.1-trillion 2020 General Appropriation Act, he placed questionable congressional insertions under the “FLR” category. He required additional documents to justify their release, to be approved by the Office of the President.

Under the FLR category, at least P283 billion worth of projects were from the DPWH. These included construction or rehabilitation of multi-purpose buildings, flood control, and thousands of road and bridge projects.

Remember when the government was looking for a budget to fund the coronavirus war chest? Congress had to pass the Bayanihan to Heal as One Act and the subsequent Bayanihan 2 law, allowing the government to discontinue projects and use these funds for pandemic efforts.

Government and Congress sources said that lawmakers didn’t want infrastructure projects under the FLR category to be touched for pandemic efforts. One source quoted a congressman as saying, “Bakit kami ang magsa-sacrifice?” (Why do we have to sacrifice [our FLRs]?”

Because of the pandemic’s urgent needs, based on Rappler’s count, about P150 billion was deducted from the DPWH’s P580-billion budget this year. It’s unclear whether lawmakers were initially aware of it, as the Department of Budget and Management was mum about the matter.

It was only during budget deliberations that the DBM and the DPWH were able to confirm in public that the discontinued DPWH funds were indeed under FLR and could no longer be released this year.

Congressmen were angry. Not only because of the smaller FLR allotments this year, but because Cayetano allies allegedly got their shares ahead of the others. The feud eventually led to Cayetano standing down and handing over the Speakership to Velasco.

According to the DBM, half of the appropriated amount will be released for projects.

The DBM started releasing infrastructure FLRs in August, with the DPWH Central Office receiving P12.82 billion on the maiden release on August 19. Along with it, 123 district engineering offices (DEO) received funds ranging from 2 million to P867 million.

The table below shows the full list of releases to DPWH:

From August to October, 45% or a total of P59.15 billion was released to the DPWH Central Office. It is unclear which projects were covered by the lumped releases, as the projects were not indicated in DBM’s Statement of Allotment Release Order.

The rest, or P71 billion, went directly to district offices. Among these, the North Manila DEO got the largest share at P2.18 billion. North Manila is the DPWH office that covers the districts represented by City of Manila Congressmen Manny Lopez, Rolando Valeriano, Yul Servo, Edward Maceda, and Bienvenido “Benny” Abante.

An amount as small as P1.5 million can only cover half of the identified sections when concreting a road. In the case of multi-purpose buildings, a previous presentation by Senator Lacson showed that a P2-million budget can only cover the girders or the foundation of the building.

Since only half of the amounts appropriated under FLR projects were released this year, the rest were included in the proposed 2021 budget.

The government accommodated this by issuing a multi-year contractual authority (MYCA) per project. This means that these projects – no matter how small – were treated like long-term projects.

Including the 2020 FLRs to next year’s budget, however, did not sit well with critics. For former budget chief Butch Abad, he’d rather see available funds for pandemic efforts.

“The FLR is pork, pure and simple. The issue is not about degrees of pork – kalahati lang or buo (whether half or whole). The issue is priorities,” Abad told Rappler.

“If the government only allocated P2.5 billion for vaccine purchase in the 2021 budget, while P70 billion is in the unprogrammed fund, why not use every available fund in the current budget to procure the vaccines?” asked Abad.

Abad pointed out that the government may pool together the P135-billion FLR, the P19-billion anti-communist fund, and the “parked” P33 billion in Philippine International Trading Corporation but it will still not be enough to fight the pandemic.

“Reallocating those funds will not have any deleterious consequences. Again: it’s a question of priorities. That shouldn’t be hard to figure out,” said Abad.

The President, however, can only veto projects or introduce additional requirements to withhold releases in the budget.

Lacson, meanwhile, proposed that questionable items in the DPWH budget be vetoed by the President. The senator again offered his help, just as he did in 2019 when the President vetoed some P95 billion in infrastructure funds.

“This is with the aim of helping those involved in the review to at least take a closer look at projects that should be scrutinized and even vetoed. In turn, this will make sure not a single centavo in the 2021 budget will go to [a] wasteful project,” said Lacson.

On Thursday, December 10, Presidential Spokesperson Harry Roque said the President “will exercise his power of review and line veto.”

Will Duterte listen to these demands? Or will he turn a deaf ear? –Rappler.com