Part 1 | Religion, the pandemic’s unseen force: At the hour of death 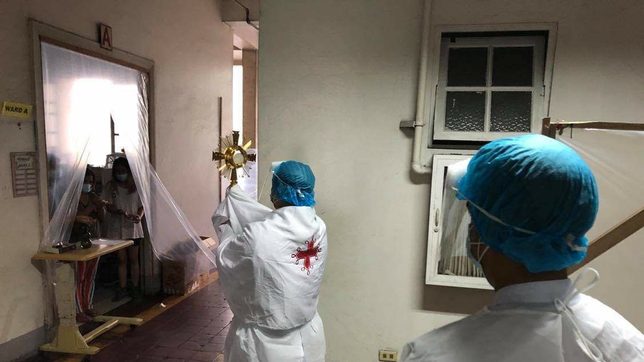 HEALER. A Camillian priest holds the Blessed Sacrament, believed by Catholics to be the body of Christ, to bless a COVID-19 ward at Quezon Institute in Quezon City.

Facebook Twitter Copy URL
Copied
From deathbeds in Manila to graveyards in Jakarta, religion shows its power in the face of sickness and death
In partnership withTempo Magazine (Indonesia)
With support fromSasakawa Peace Foundation

Editor’s Note: While a microscopic virus is sweeping the world like the plagues of old, an invisible force – not less powerful – is also shaping the way this pandemic unfolds. For thousands of years, despite efforts to render it irrelevant or remove it from the modern world, religion has deeply influenced the way people think, behave, and ultimately make sense of sickness and death. We are witnessing this, sometimes undetected, during the COVID-19 pandemic, a health crisis that has killed more than 2.7 million people across the globe.

In Southeast Asia, the influence of religion during the pandemic is most pervasive in the Philippines and Indonesia. The Philippines, a country of 110 million people, has the biggest Catholic population in Asia and the 3rd largest worldwide. Indonesia, with more than 275 million people, is the country with the largest number of Muslims.

In this 3-part series, we bring you to deathbeds in Manila and graveyards in Jakarta, Sunday services in churches and Friday prayers in mosques, to show the role of religion in this pandemic that is often viewed only through scientific lens. Our journey begins where religion shows its power the most: the hour of death.

Father Dan Cancino, 46, was on the verge of tears as he recalled one of his most painful experiences during the pandemic: his first time to bless a dying victim of COVID-19.

Cancino is a Catholic priest and doctor of public health belonging to the Camillian order, whose members take a vow to comfort the sick even at their own risk. He has tended to victims of COVID-19 since the start of the pandemic – but to do this for a dying friend, no less, was most heartbreaking.

So Cancino performed what was once unthinkable before the pandemic: anointing the sick via video-conferencing. In a Catholic ritual called anointing of the sick, a priest uses holy oil to trace a cross on the forehead of the dying, then says a prayer to forgive the person’s sins and offer his or her life to God.

Cancino and his friend’s family set up a video call with the help of a nurse at his friend’s side, clad in full-body personal protective equipment (PPE).

“It’s so difficult really seeing a friend dying without really being near, without really touching him,” said Cancino. “But you know, at that point, hearts were burning and our prayer was so intense.”

His friend was conscious, Cancino said. “He was aware because he was raising his hand,” the priest said, recounting how his friend, an active church worker, struggled but failed to make the sign of the cross. “And we just said, ‘No more.’”

By around 5 pm that day, his friend died – physically alone, but not abandoned.

“And I’m just hoping that he felt that he was not alone. Well, spiritually and theologically maybe as a priest, I can say that he’s not alone dying. The Lord is with him,” Cancino said.

He also said the pandemic hit much closer to home when his mother and father, aged 95 and 89, respectively, also got COVID-19. “That was a difficult moment for me. I was not with them.”

“And they were telling us it’s not COVID-19 that will kill them, it’s the loneliness and the difficulty of being alone,” Cancino said. “And my mother was telling me, ‘Will I still go home? Will I still be alive when I get up from here?’ So it’s the mental health, human mentality, affected.”

The COVID-19 pandemic, according to Cancino, can lead to what he calls another “pandemic”: a mental health crisis.

If mental illness is real, if depression is real, so is hope and so is faith, right?

To address this, the Philippine government asked religious leaders in August 2020 to help spread the “message of hope to our suffering countrymen…to stave off more incidents of self-destruction.”

Dominican priest and microbiologist Father Nicanor Austriaco believes that one’s religion and spirituality is valuable in making sense of all the suffering.

“If you notice, the mental health issues associated with a pandemic are exacerbated in secular societies precisely because individuals do not have the kind of resources, the emotional, psychological, and theological resources to understand what is happening to them,” Austriaco said.

“I cannot tell a man whose grandfather is dying, you know, he will say to me, ‘What’s happening?’ and I go, ‘It’s a zoonotic transmission of a novel betacoronavirus with a case fatality rate of .3%.’ Useless. It’s true, it’s true, it’s true knowledge. But for someone who is suffering? Useless knowledge,” Austriaco said.

Churches help build resiliency among a suffering people, said Cancino, who is also executive secretary of the health care arm of the Catholic Bishops’ Conference of the Philippines. “In this uncertain time, there’s only one certainty – God. And that’s where we can find more consolation and hope.”

He added, “If mental illness is real, if depression is real, so is hope and so is faith, right?”

In Indonesia, the pandemic has affected not only the process of grieving, but also the elaborate death rituals followed by Muslims around the world.

This COVID-19 has disrupted not only the economy, but our social life.

Usually, according to Islamic law, a body is washed from toe to head with running water, according to Dr Makky Zamzami, head of the Nahlatul Ulama COVID-19 Task Force. Then the body is wrapped in a shroud. The body is then prayed to at the mosque or at home before being taken to the funeral.

But Makky initially felt that the process of handling the bodies of COVID-19 patients seemed excessive. At first, those who died, usually from the hospital, were immediately taken to the cemetery. The funeral workers wore level 3 PPEs, the highest level of PPEs, which made them look like astronauts. It was “like dealing with Ebola patients in Africa,” he said.

The attitude of Makky and many other people, however, eventually changed.

During the pandemic, a dead body is only smeared with water, as when a person performs ablution. After that, it is immediately dipped, put in a crate, and taken to the cemetery. At the cemetery, the face of the body is turned toward the Qibla, the direction of Mecca toward which Muslims face for prayers. But there’s no way the chest can be opened by the family, because opening it for viewing is potentially infectious.

Dr Corona Rintawan, chair of the Muhammadiyah COVID-19 Command Center, explained that handling corpses is a challenge in itself. One of the sources of objections by residents and family is that they do not believe that their families who died are handled according to Islamic law. The funeral carried out by health workers wearing level 3 PPE also raised concerns among members of the community because it increased the probability of transmission.

One of the things done by Dr Corona at the Muhammadiyah Hospital in Lamongan, East Java, was to assuage that fear. For example, before bathing, the body is decontaminated first. The bathing officer wears level 3 PPE. After the bath, they wrap the body in 6 layers of plastic, then put it in a coffin.

“We are facilitating families to see the process, using level 3 PPE. So that they see that the process is in accordance with sharia (Islamic law). So that there is relief for the family because they can attend,” he said.

By wrapping the body in 6 layers of plastic, said Dr Corona, there is little chance of infection. With such conditions, funeral officials do not need to wear level 3 PPE, they just need to wear a mask at the funeral.

“So that the community’s rejection of the funeral is reduced,” he said. There was an incident where the family was almost forced to handle the management of the family’s body by themselves. The hospital then coordinated with the regional COVID-19 Task Force and the police to convince the family.

The matter of victims’ funerals has become one of the strongest sources of discomfort among Muslims whose family or close friends have experienced a disaster. Anwar Abbas, deputy head of the Indonesian Ulema Council (MUI), had a similar experience when his close colleague, Nadjamuddin Ramly, died of COVID-19 on February 21. Nadjamuddin is a former deputy secretary of MUI and deputy chairman of the Muhammadiyah Central Executive Council (PP).

In Indonesia, when a close friend or family member dies, there is a strong desire to come to pay last respects by participating in prayer for him or carrying his coffin to the funeral. It’s a ritual that can’t be done during a pandemic.

When he heard that Nadjamuddin died at the Muhamadiyah Hospital in Bandung, Abbas said he was confused. “There was a strong desire to come, also not to come because of the pandemic situation.”

To honor his colleague, Abbas finally performed prayers from his home. He knew that the scholars had different opinions about this. But he decided to keep praying on his own to honor his close friend. “This COVID-19 has disrupted not only the economy, but our social life,” said Abbas.

“With the extent of the impact of this pandemic, it is impossible for COVID-19 to be tackled only by the government. All components of society must take a role. Likewise with religious leaders,” said KH Robikin Emhas, a religious figure and head of the executive board of Nahdlatul Ulama. Since Indonesia is a Muslim majority country, added Robikin, “the influence of religious figures is quite significant.”

Hery Trianto, public communication head of the COVID-19 task force, said religious leaders, who are among opinion leaders, have an important role in dealing with COVID-19, especially in persuading people to change their behaviors.

Cancino, the doctor-priest, echoed the same role for faith leaders in the Philippines.

“Religious-inspired institutions or organizations can promote helpful, proper information that can prevent stigma, fear, discrimination, among the people. That is very, very important, because faith communities are trusted communities,” Cancino said.

Despite their role in communities, however, religious leaders like Cancino aren’t immune to questions about their own faith. “Seeing a 5-year-old girl in the isolation room, I had questions. I had questions when I knew my parents had COVID-19. I had questions every time I’d arrive in the hospital and they’d say, ‘Father, we’re full packed.’”

“But my next question is, what can we do?” Cancino said. “This is what’s happening, what can we do right now?” – with reports from Jezreel Ines/Rappler.com

(To be continued. Part 2 | Battle for body and soul)

This story, a collaboration between Rappler and Indonesia’s Tempo Magazine, was published with support from the Sasakawa Peace Foundation.