Will Robredo be excluded from future Palace events? 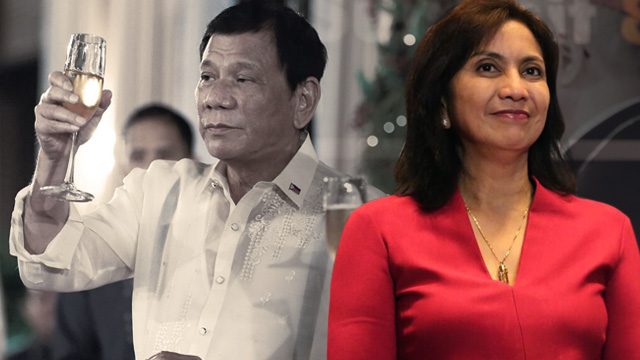 Facebook Twitter Copy URL
Copied
Presidential Spokesman Abella says, 'It is a prerogative of the Palace to invite those who they feel is needed to be there'

Despite being the second highest official of the land, Vice President Leni Robredo was nowhere to be seen at the traditional vin d’honneur in Malacañang on Wednesday, January 11.

Given it was the Palace that retracted the invitation for her to join the gathering, can the public expect her to continue being excluded from similar major events attended by President Rodrigo Duterte?

Presidential Spokesman Ernesto Abella’s response: “It is a prerogative of the Palace to invite those who they feel is needed to be there.”

WATCH: Abella on Palace retraction of VP Robredo invitation to vin d'honneur: I wouldn't say she was 'snubbed' pic.twitter.com/rwA1rBPDlh

But even before the vin d’honneur, Robredo had been missing from major national events.

Under the previous administration, this was not the norm. Vice President Jejomar Binay attended every Rizal Day ceremony during Aquino’s years in power, even leading the rites alongside President Benigno Aquino III.

Binay kept this up even when he was openly anti-administration and had left Aquino’s Cabinet.

He was also invited to lead Indepedence Day ceremonies either with Aquino or separately.

The last time Robredo appeared alongside Duterte in a national event was in November during the Super Typhoon Yolanda anniversary. Before that, she attended the National Heroes Day ceremony in August.

The Palace is careful not to say they are deliberately snubbing the Vice President, though the rift between her and Duterte is well-known.

“I don’t think the word is ‘snub,’” said Abella after the vin d’honneur.

“She also has her own participations in public service,” he said, citing as examples Robredo’s speaking engagements and activities in line with her advocacies.

Can the public expect Robredo to be excluded from future national events? During the Independence Day celebration in June, will she not be invited to lead the flag-raising ceremony in Cavite or another part of the country, a task typically given to the Vice President?

Though Duterte has admitted to “irreconcilable differences” between him and Robredo in terms of government policy, he seemed to say in some interviews that he bears no personal grudge against her.

“Wala kaming away ni Leni,” he has said in the past. He has also quipped, “I don’t pick a fight with a lady.”

Robredo has said she still wants to reach out to the President despite their differences. – Rappler.com