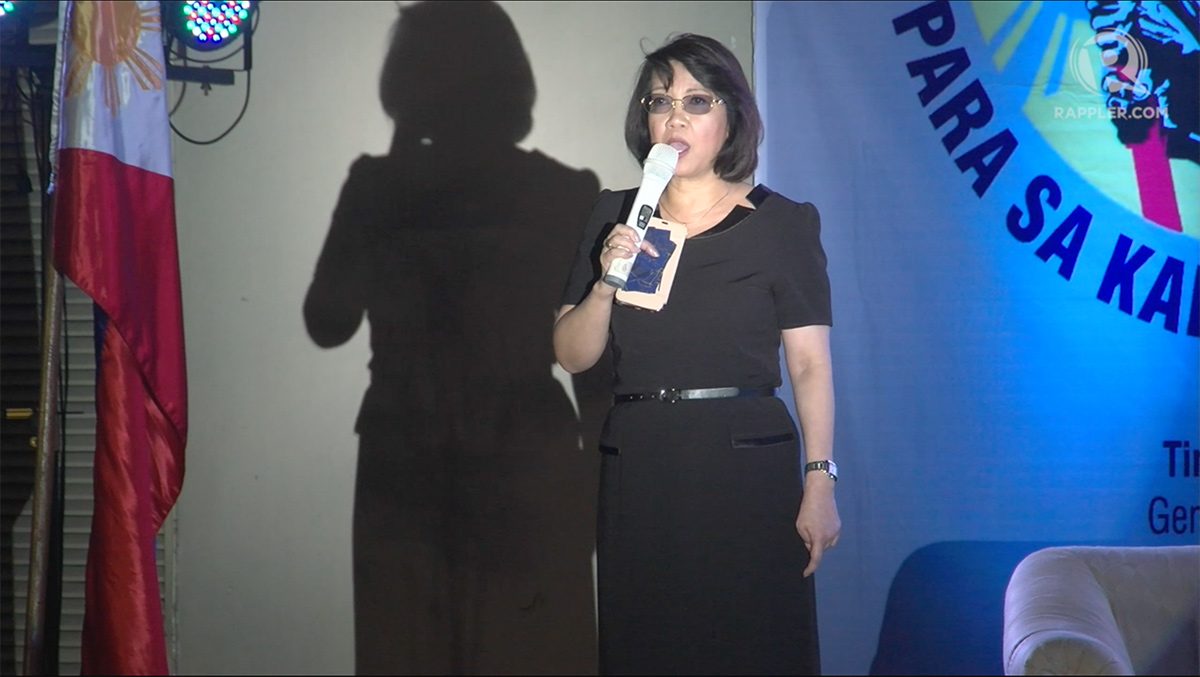 Facebook Twitter Copy URL
Copied
The ousted chief justice calls on Tindig Pilipinas to join with other forces, but Senator Hontiveros says they still have a fundamental difference with the Left

Tindig Pilipinas held a general assembly on Tuesday, June 12, Independence Day – its biggest yet since it launched in September 2017 a coalition to resist the Duterte administration.

The purpose was to send a message that the opposition is alive and strong.

It was a reaction to criticisms that the opposition was flailing, even catatonic, as it has failed to capitalize on controversies to strengthen its standing.

“We will persevere. There is no such thing as a catatonic opposition,” said Leah Navarro of the Black and White Movement, one of the member groups of Tindig Pilipinas.

Former chief justice Maria Lourdes Sereno was the main event, an obvious charm offensive on the part of the opposition.

Senator Paolo Benigno “Bam” Aquino IV does not keep it a secret that they are courting Sereno to join not just the opposition, but even its senatorial slate for 2019.

Was her Tindig Pilipinas appearance a sign of things to come? “No, I was just invited,” Sereno said, evading further questions.

On stage, Sereno had a message for the coalition: “Men and women of Tindig Pilipinas, fix your eyes on the prize. Many issues may just serve to divert you, to dissipate your resources, your time and your energy. Analyze what is at stake, what is at stake must be such a huge, huge price that we are now experiencing such terrible times.”

She added: “In the end, my friends, I ask that we rise above our differences. Those of us who have been fighting for freedom, we know some of them and we have all heard each other, we know that there are devices intended to make us fight [each other] and forget that democracy is at peril. We must summon whatever moral courage we have so that we can trust – to the extent that it is wise – each other, so we can continue this fight.”

Joining with the Left?

It is unclear who she was referring to, but Sereno is one of the reasons behind rare joint appearances of the Liberal Party (LP) and the Left. (READ: The fall of the ‘dilawang’ Liberal Party)

At protests against Sereno’s ouster, the lines are blurred, as civic leaders aligned with the LP share the stage with prominent personalities from the Left.

Senator Risa Hontiveros said on Tuesday that there was still a fundamental difference between the Left and the opposition.

“Right now, one fundamental issue of Tindig Pilipinas is that you have to have an unqualified opposition to the administration. So I suppose that it means there’s an issue of being part of the opposition, but there are still members [of the Left] with ranking positions in the administration. That will remain an issue in the coming months, unless it is resolved among the ranks,” Hontiveros said in Filipino when she was asked if they were considering joining forces with the Makabayan bloc.

Sereno dedicated a good part of her speech to making an appeal: “We have a singular opportunity to be united with all the freedom-loving peoples in this country and the world. We must not lose sight of that opportunity.”

Hontiveros said they are taking all the suggestions in good faith.

“I will listen to the feedback and constructive criticism, especially those coming from people whose hearts are in the right place because they want to have an effective opposition, a successful opposition against the administration,” Hontiveros said.

Hontiveros said that the opposition will continue studying the option of tapping Sereno to be part of its 2019 senatorial slate, but that they would prefer that she be reinstated as chief justice.

The Supreme Court en banc is set to vote on June 19 on Sereno’s motion for reconsideration. – Rappler.com