#CJSearch: Is it worth appointing De Castro who has only 2 months to serve? 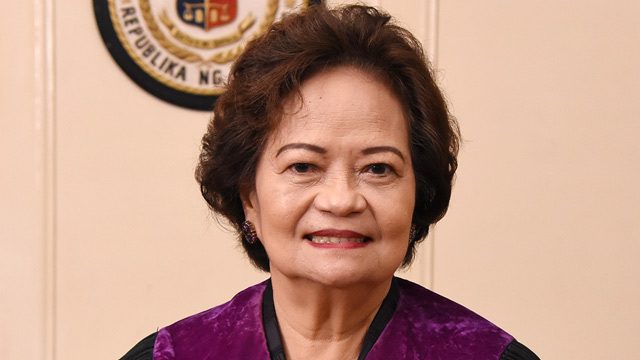 One of the issues that came up during the public interview of Supreme Court Associate Justice Teresita Leonardo-De Castro is that she only has two months to serve if ever she is appointed Chief Justice.

“It is not as if I’m going to start today, I’ve been doing this for a long time, I’ve accomplished much already,” De Castro told the Judicial and Bar Council (JBC) on Thursday, August 16.

JBC member Milagros Fernan-Cayosa asked De Castro what she thinks of the tradition of seniority, and the problems that may arise if the most senior applicants – like her – only have few months to serve.

Cayosa pointed out that it may be detrimental to the stability of the SC.

De Castro reasoned that she has enjoyed immense support from her colleagues over the years that she’s confident she will also enjoy the same support to institute changes in a short amount of time.

“I believe that it will not cause any problem, because I’ve been working with my colleagues since 2007 and..they’ve always supported my recommendations, not only in judicial cases but also in administrative matters and I see no reason why I would not get support and cooperation,” De Castro said. (READ: #CJSearch: How did aspirants vote on key Supreme Court decisions?)

After De Castro, Carpio next?

Several court insiders whom Rappler talked to see this as an opportunity for Acting Chief Justice Antonio Carpio to accept the Chief Justice nomination when De Castro retires.

Carpio declined the nomination out of principle because he said he does not want to benefit from the vacancy created by the ouster of former chief justice Maria Lourdes Sereno via a quo warranto petition. Carpio was among the 6 dissenters in that unprecedented decision.

Because Carpio is not retiring until October 2019, the insiders think the senior justice can replace De Castro in October, since there would be no quo warranto principle at play.

We asked Carpio about it during a chance interview after a book launch in July, but the senior justice just smiled and said, “that is speculative.”

Meanwhile, De Castro is not fazed by criticisms against her chief justice aspirations. JBC member retired judge Toribio Ilao asked De Castro about comments on social media that she is ampalaya (gourd), or made bitter by the choice of Sereno as chief justice over her in 2012.

“I don’t want to respond to that. They don’t know anything..they do that because of lack of knowledge. I forgive them because they do not know what they are doing. It’s useless to address that,” De Castro said.

De Castro swears all her opposition to Sereno was coursed through proper channels and that despite it, the two had a “harmonious” relationship. (READ: De Castro disses Sereno, quo warranto oppositors)

“It never affected our relationship. She appointed me chair of the committee on family court,” De Castro said.

JBC member retired justice Jose Mendoza waived his turn to ask De Castro, and said he believes the justice has proven her accomplishments in the judiciary.

Carpio is the ex-officio chairman of the JBC, but he did not attend the morning session of the public interviews with De Castro and the other two senior justices, Diosdado Peralta and Lucas Bersamin.

De Castro has worked in government for 45 years, starting as a clerk at the SC, then moving to the Department of Justice. She became presiding justice of Sandiganbayan, before she was appointed SC justice in 2007. – Rappler.com