Facebook Twitter Copy URL
Copied
For four straight days, SMNI asked activists joining the 2022 race about their alleged communist ties despite lack of substantial evidence. This line of questioning has been flagged by critics as dangerous and tantamount to red-baiting.

A woman wearing a red polo shirt stood up, went to the microphone stand, and called the attention of Teddy Casiño, who, just minutes before, filed the papers of his party-list group Bayan Muna for the 2022 elections.

In Filipino, the reporter asked rather bluntly, “Are you a member of the Communist Party of the Philippines (CCP)?” To which the former lawmaker responded, half-jokingly, “I thought you already forgot to ask.”

The reporter was from Sonshine Media Network International (SMNI), the broadcast arm of the Kingdom of Jesus Christ. KJC is led by Filipino televangelist and self-declared “appointed son of God” Apollo Quiboloy, who has showered President Rodrigo Duterte with luxurious gifts over their three decades of friendship.

It was October 7, the penultimate day for the filing of certificates of candidacy (COC), an ever-important election activity in the Philippines, and the chatter among reporters in the press briefing area about SMNI’s delegation was: here we go again with red-baiting.

Over the four-day period that five leftist party-list groups submitted their application papers to the Commission on Elections (Comelec), SMNI’s journalists didn’t fail to ask the nominees of the so-called Makabayan bloc about their supposed ties to the communist movement. (The Makabayan bloc consists of Bayan Muna, Act Teachers, Gabriela Women’s Party, Kabataan, and Anakpawis.)

In the first two days, the line of questioning from Quiboloy’s news organization was not as forward.

“Many former cadres from the CPP-NPA-NDF (New People’s Army-National Democratic Front) are identifying you to be part of legal front organizations. What can you say about this or do you deny this?” one SMNI reporter asked former congressman and Act Teachers’ second nominee Antonio Tinio.

“Do you condemn the atrocities committed by the CPP-NPA-NDF?” another SMNI reporter asked Gabriela Representative Arlene Brosas.

Both veteran activists replied that their group’s accusers had yet to provide substantial evidence against them and win a case in court.

SMNI ramped up the framing of their questions in the following days when the Comelec received nomination papers from the Makabayan bloc.

“This is a direct question: Are you a member of the CPP-NPA-NDF? And if you will deny this, do you consider them a friend or an enemy?” one reporter asked senatorial aspirant Neri Colmenares, a former Bayan Muna representative in the lower chamber.

“Do you condemn the atrocities of the CPP-NPA-NDF? Because I have talked to some cadres, they have been a member of Anakpawis and Kilusang Mayo Uno,” said another reporter to Anakpawis first nominee and former agrarian reform chief Rafael Mariano.

In April, the local social media landscape erupted after community pantry pioneer Patricia Non was asked during an online presser whether she had ties to the communist movement.

“The burden of proof should always lie on the accuser, and hard questions on the evidence behind these accusations should be directed at the officials of the National Task Force to End Local Communist Armed Conflict (NTF-ELCAC), the police, and the military,” the National Union of Journalists of the Philippines said at the time, referring to the state forces that red-baited the food bank organizer.

Reacting to SMNI’s line of questioning towards the Makabayan bloc, media scholar Danilo Arao said that yes-or-no questions pertaining to communist membership and denunciation of alleged communist atrocities are unethical.

“Journalists should remember that red-tagging endangers the lives of those who are red-tagged and they cannot be used to promote [albeit indirectly] the military’s witch hunting,” Arao told Rappler.

Rappler sent an email to SMNI, asking why it phrased its questions to Makabayan that way, and what its stand on red-baiting is. We will update this story when we receive their reply.

A Rappler investigative piece in early October noted that SMNI “has been an active source of news content related to the communist rebellion, often shared by the red-tagging cluster.” For the record, here’s what nominees of the party-list groups under the Makabayan bloc said in summary:

“Peace talks in the Philippines should resume because that will address why there is even an armed conflict in the country,” said Raoul Manuel, first nominee of Kabataan. His group, as well as Gabriela Women’s Party, are the subject of ongoing disqualification cases filed by the NTF-ELCAC.

“This is a pure effort to silence progressive groups and protect their boss President Rodrigo Duterte,” Casiño said.

The Comelec set a cap of 100 slots for the media during the week-long event due to COVID-19 considerations. SMNI had the most number of representatives among news groups accredited by the Comelec. They could easily be identified in the press briefing area due to their uniform: a polo shirt with red, white, and black stripes.

SMNI reporters, however, didn’t actively ask questions when prominent personalities flocked to the filing center on the last day on October 8.

Why was this so? The joke around the tent was, because there was no more Makabayan bloc member left to cover. – Rappler.com 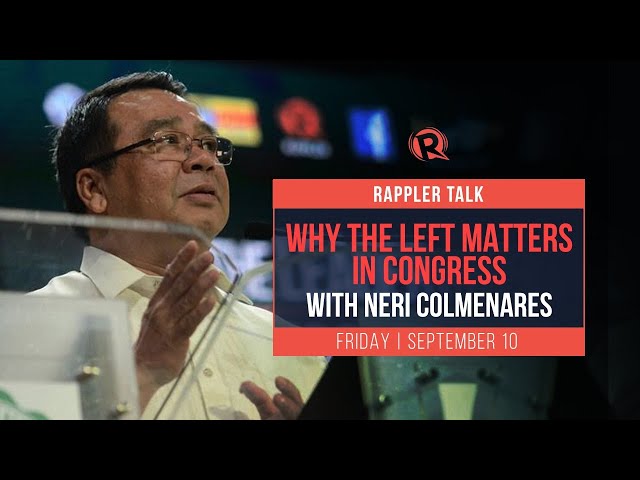