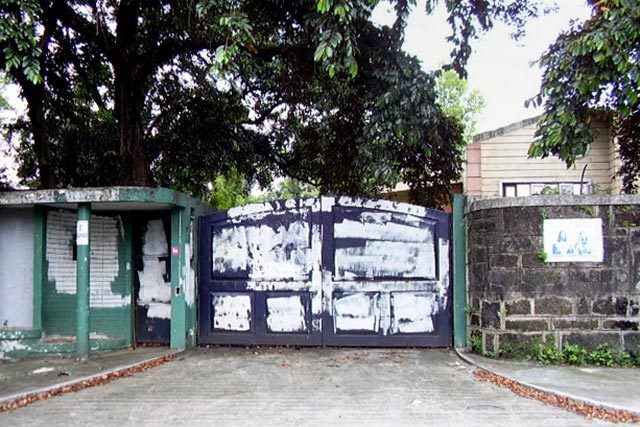 Facebook Twitter Copy URL
Copied
Stripped of its original amenities, the multi-million-peso property is now being renovated to make way for an executive house of the Quezon City government

Part 1: No closure yet on Erap Estrada’s plunder case
Part 2: Elections and the Estrada wealth

MANILA, Philippines – Whatever happened to the opulent “Boracay Mansion” said to be owned by former President Joseph Estrada?

Stirring controversy in 2001 because it was believed to have been purchased with funds from the Jose Velarde account associated with Estrada, the property was originally valued at P86.7 million.

Located at 100 11th Street in residential New Manila, Quezon City, the two adjacent lots measuring 7,145 square meters were estimated to be worth at least P142.92 million by March 2008.

Stripped of its original amenities – a swimming pool that produced artificial waves, an air-conditioned gazebo, a water heater for the pool, expensive tiles and toilet fixtures – the property is now being renovated to make way for an executive house that will serve as a guesthouse for visitors of the Quezon City government. 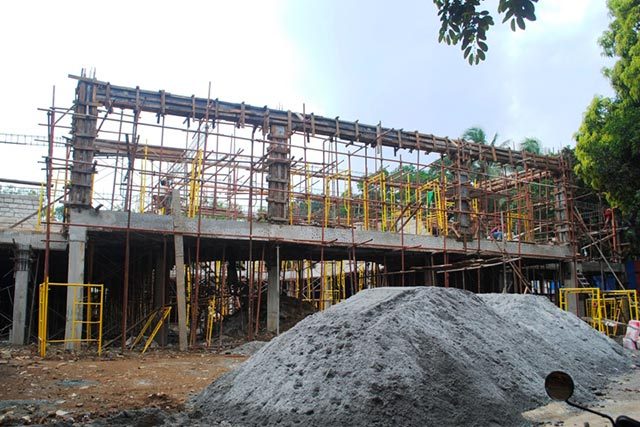 Designed by the local government’s Special Design Group, the estimated P90-million house is targeted for completion by November or December 2015. The property has been titled in the name of the Quezon City government with Transfer Certificate Title (TCT) numbers N-305262 and N-208116.

The local government acquired the property subject to the adverse claim of the “People of the Philippines.” In the TCT dated July 4, 2007, the national government – represented by the justice secretary, solicitor general, and overall deputy ombudsman – noted that the property was part of the “ill-gotten wealth amassed by former President Estrada which is the subject of the plunder case against him.”

Called “Boracay Mansion” – because of the artificial white sand by the pool reminiscent of the powdery sand in the beaches of Boracay in the Visayas – the property was vandalized, totally damaged, and no longer livable when the Quezon City government acquired it.

It was as if its original owners wanted to make sure that whoever took over it would find it totally useless and without value. It bore no signs of their expensive taste, only traces of what promised to be an extravagant lifestyle. Barangay officials earlier said that, as early as November 2000, there were reports of unknown items being taken out of the property at odd hours. A previous Newsbreak story on the Boracay Mansion said they used the 10th Street gate as exit because it was less visible and less busy compared to 11th Street. The property spans 10th and 11th streets.

Barangay officials were helpless in stopping what residents reported at the time because it was private property and had not been taken over by either the Quezon City government or the anti-graft court. The house was not part of a gated subdivision with security guards who could check on possible trespassers.

Previous reports said that, on weekends, the house was used by Estrada and his favored partner, Laarni Enriquez. Long hours of partying kept them awake. Later, Estrada would claim that the house was only lent to him by his close friend Jaime Dichaves and that he did not own it. 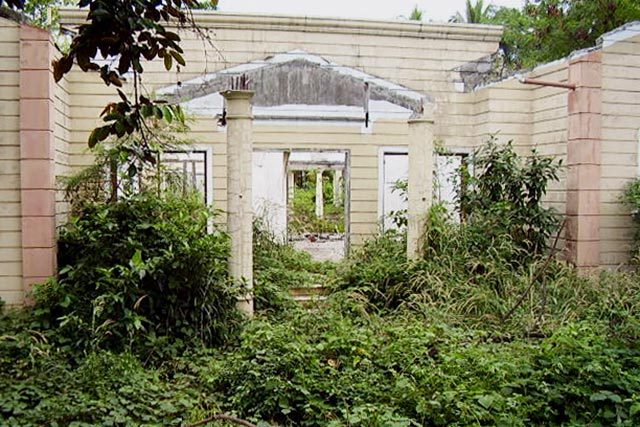 When plunder charges were filed against Estrada in 2001, there were riveting stories about unexplained wealth and extravagant mansions for his women. The Boracay Mansion was just one of many.

It was, however, the only property that bore evidence it was linked to Estrada’s Jose Velarde “dummy account,” according to then Special Prosecutor Dennis Villa-Ignacio. It was also the only property successfully forfeited in favor of the government.

How that happened did not come too easily or quickly.

On September 15, 2005, the Quezon City government auctioned the property after its owners recorded tax delinquencies that amounted to about P1.74 million.

The registered owner of the property was St Peter Holdings Corporation, formed by former partners of Estrada’s lawyer then, Edward S. Serapio. The chair of the corporation at the time was Jose “Sel” Yulo, whose name also appeared as owner on one of the architectural plans submitted to the Barangay Mariana office.

According to a Philippine Center for Investigative Journalism (PCIJ) story in December 2000, the senior partners of the De Borja law firm, which incorporated St. Peter Holdings, designated Yulo to represent the company in the purchase of the property. He later on executed an affidavit that said he was a mere nominee of Dichaves. Yulo’s financial ability to purchase the property had been questioned then.

Quezon City Hall officials were supposed to serve a notice of forfeiture to St Peter Holdings, but the company was no longer at its given address in Ortigas. The city government proceeded with an auction in 2005, but there were no takers, most likely because of the adverse claim appended to the title, officials said.

Two years later, in September 2007, the Land Registration Authority directed the Quezon City government to give up its title to the property so that the Sandiganbayan could auction it.

The Sandiganbayan was looking to recover millions of pesos in favor of the state. 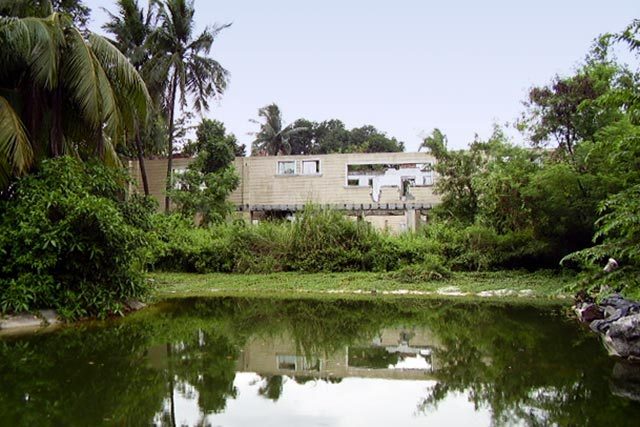 In between – in August 2009 – the Sandiganbayan allowed Barangay Mariana to temporarily use the property for its Solid Waste Collection Program and its shredders. The barangay chairman at the time, Regina San Miguel, reasoned it would help reduce the risk of the grounds becoming a breeding ground for dengue mosquitoes. Unused for a long time, the pool contained stagnant water.

Later on, even the tiles of the pool would be carted away and the hole where the pool used to be would eventually be covered up. On January 26, 2010, another auction was conducted, this time of the remnants of the Boracay Mansion – a house and the two lots. In a Sheriff’s Report dated February 1, 2010, Edgardo Urieta of the Sandiganbayan’s Security and Sheriff Division reported a failure of bidding because no bid was received. It was no different from the failed auction conducted by the Quezon City government in 2005.

To prevent the further deterioration of the property and to avoid additional expenses in maintaining and securing it, the anti-graft court ordered Urieta to turn it over to the Bureau of the Treasury for disposition. By March 2010, the turnover was completed.

Today the lot adjacent to the property on which the house stands is being occupied by the family of a barangay tanod. They are watching over it to make sure that vandals and squatters do not invade it.

Shielded from public view, the lot, as seen during our ocular inspection, had remaining structures of a pelota court, quarters for what was presumed to be guards of the Presidential Security Group, a treehouse, and a fountain. There are no traces of what these features looked like – only wild grass, trees, pet dogs of the tanod’s family, and their modest makeshift home. The constant crowing of a distant rooster gives it a rural feel in the middle of the city. The opening in the wall, which used to divide the two adjacent lots, had been closed off. The only entrance to the other property is a separate small gate with a short rickety wooden bridge over a canal.

Estrada had denied ownership of the Boracay Mansion, whose renovation was said to be undertaken by New San Jose Builders. PCIJ in 2000 reported that, according to documents, New San Jose is owned by Jose L. Acuzar, brother-in-law of now Executive Secretary Paquito “Jojo” Ochoa Jr, who, in turn, was Quezon City administrator when Feliciano “Sonny” Belmonte Jr was mayor.

The anti-graft court said that the abandoned property originally owned by the Madrigals had as its “beneficial owner…Pres. Estrada and is used by Laarni Enriquez whose relation to former Pres. Estrada was never denied.”

Estrada, to this day, has not admitted ownership of the Boracay Mansion. And strangely no one has come forward to make a claim on a multi-million-peso property.