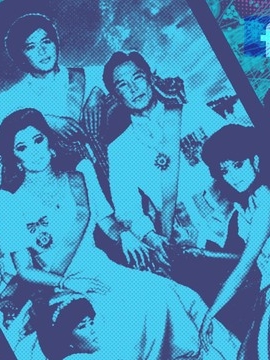 “Perception is real, the truth is not.” Imelda Marcos said this in a recently released documentary, The Kingmaker.

This seems to be the ethos of the Marcos comeback playbook.

Beyond justifying the family’s wealth and denying massive corruption during the Martial Law period, the Marcos propaganda network focused its energies on hyping up “achievements” of the Martial Law regime, denying abuses, and vilifying rivals.

The facts don't matter. “Achievements” were either exaggerated or manufactured. That these were not previously reported on were explained as being the fault of “biased” media, which supposedly kept the information “hidden” from the public.

Much of the content touting the supposed “achievements” of the Ferdinand Marcos presidency were copied and reposted over and over like chainmail.

The lists typically included a litany of infrastructure projects that the Marcoses built. Such lists included a combination of true and many false and misleading claims. 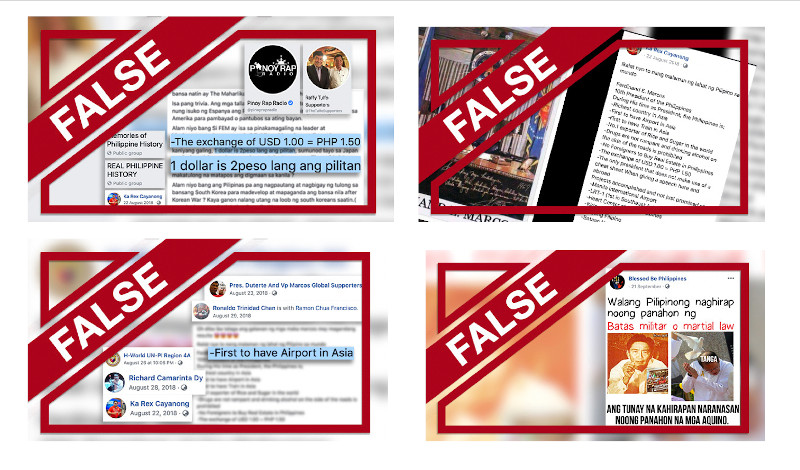 Often reiterated and rehashed was the claim that the Philippines was the "richest country in Asia" during the Marcos years. It never was. The peso-dollar exchange rate during that time supposedly stood at P1.50-P2 to the dollar. This is not true. Official data from the Bangko Sentral ng Pilipinas (BSP) showed the Philippine peso was already valued at P3.91 per dollar when Marcos came into power in 1965. By the time he was ousted in 1986, one dollar was equivalent to P20.46 – depreciating by 423.46%.

Even foreign-funded programs were touted as Marcos achievements. These included supplemental feeding programs such as the nutribun and bulgur for students in public elementary schools.

Bulgur grains and the ingredients for nutribun were actually supplied by the United States Agency for International Development (USAID) as part of its Food for Peace Program.

Reviving the Marcos name came at the expense of the family’s nemesis, the family of the late senator Benigno "Ninoy" Aquino Jr and the press.

In a bid to proclaim Marcos as the “best president” the Philippines ever had, weaponized memes framed the narrative as a Marcos vs Aquino play. Some went as far as claiming that the “dilawans” have been in power for the past 30 years. 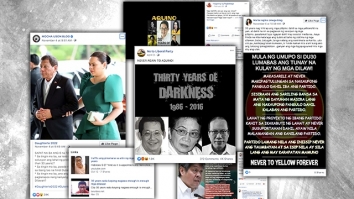 This is misleading at best.

When the Marcos dictatorship fell in 1986 due to the EDSA People Power revolt, Aquino’s widow, Corazon “Cory” Cojuangco Aquino assumed the presidency. Fast forward to 2016, another Aquino was the outgoing president – Benigno Simeon Aquino III, the only son of Ninoy and Cory.

Three presidents served in office in between the tenure of the two Aquinos: Fidel Ramos, Joseph Estrada, and Gloria Macapagal Arroyo. Of all the post-EDSA presidents, the longest serving was Arroyo, who assumed part of the remaining term of Estrada after the latter was ousted in 2001, and got elected for another 6 years.

Memetic propaganda essentially erased or disregarded achievements and economic growth that happened during the tenure not just by the Aquinos, but of all post-EDSA presidents combined.

Ironically, all the 3 other presidents – Ramos, Estrada and Arroyo – supported the bid of Rodrigo Duterte for the presidency in 2016.

“Hidden history” and the “biased” press, according to the narrative, were also to blame for unknown or “unreported” sins of the Aquino family.

One of the charges leveled against the Aquinos pertained to Hacienda Luisita, which was exempted from the Comprehensive Agrarian Reform Program enacted during Cory Aquino’s term. While this claim is rooted in real events, the way it is presented is misleading. The Hacienda Luisita case got a lot coverage from mainstream media.

One claim that was widely circulated by one of the pro-Marcos Duterte propagandists was that the Central Intelligence Agency (CIA) of the United States supposedly "revealed" recently that Cory Aquino requested the US for airstrikes against Filipinos in 1989.

This was misleading. While Cory did ask for US air support during the 1989 coup d’etat, these requests were not hidden or "recently revealed." They were headlined in major local and international publications at the time. 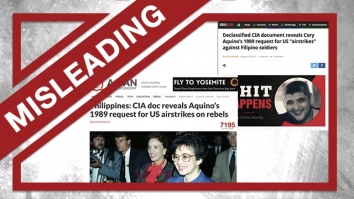 Some of these claims bordered on the ridiculous.

A popular claim that Rappler spotted more than once was that Ninoy Aquino was a naturalized Malaysian citizen and that he was carrying both a Filipino and a Malaysian passport when he died. There is no proof that this ever happened. Malaysia was officially recognized as a sovereign country only in 1957. The naturalization law of Malaysia also requires an individual born outside Malaysia to have resided in the country for at least 10 years to acquire citizenship. Aquino, who was born in 1932, would have had to fulfill this requirement to gain citizenship.

Another claim that went viral said that Cory wore Imelda Marcos’ necklace, which has allegedly been missing from the collection of the Presidential Commission on Good Government. Others said Kris Aquino, and even former chief justice Maria Lourdes Sereno wore the necklace. None of these were true.

Nevertheless, these claims got thousands of shares on social media.

This is not to say that all the false narratives about the late dictator or the Martial Law era came from the Marcoses themselves. They persisted, some historians said, because the family never publicly denied them.

In fact, the Marcoses also made their own false claims about the period. 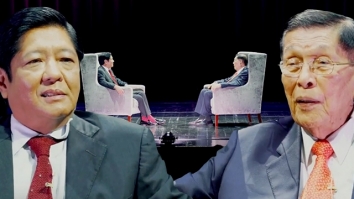 On September 20 and 21, 2018, the 46th anniversary of the declaration of Martial Law, Bongbong sat down with former Marcos defense minister Juan Ponce Enrile to talk about his father's 20-year rule. Rappler debunked 3 of Enrile’s false claims from their conversation: that the Marcos government only executed one person, that there were no massacres, and that the Jabidah massacre was a mere invention. (READ: LIST: False claims of Juan Ponce Enrile on Martial Law)

In a radio interview in January, Imee Marcos claimed that she was a minor during the Martial Law period. As such, she said, she could not admit guilt over the events that happened during that time. Again, this was a lie. Imee was about to turn 17 when her father declared Martial Law, which means she was no longer a minor for 13 out of 14 years of Martial Law.

The list of lies and misleading claims continue to this day.

And for the Marcoses, the playbook appears to be working. In May 2019, despite being exposed by most of mainstream media for lying about her academic achievements, Imee Marcos won a seat in the Philippine Senate. – with Vernise Tantuco /Rappler.com