LOOK BACK: The Aquino assassination Considered one of the staunchest opponents of then president Ferdinand Marcos, Aquino was regarded as a contributing factor in the transformation of the small opposition during Martial Law. His assassination galvanized the opposition even more and drew widespread support for their cause, culminating in a People Power revolt in 1986.

On his death anniversary, Rappler revisits the events surrounding the assassination of Aquino.

From Boston to Manila

Aquino was one of the first individuals arrested following Marcos’ Martial Law proclamation. The former senator was placed under military trial after he was accused of murder, illegal possession of firearms, and subversion.

To protest the “trumped up charges” against him, Aquino went on a hunger strike for 40 days from April 4 to May 13, 1975. Two years later, in 1977, the military tribunal sentenced him to die. The execution, however, was never carried out.

In 1980, after 7 years in prison, Marcos allowed Aquino to have bypass surgery in the United States after a heart attack. After his operation in Texas, the Aquino family settled in Boston, Massachusetts. However, the family patriarch continued being critical of the Marcos administration.

In 1983, after 3 years of self-exile, Aquino decided to go back to the Philippines despite opposition from various people who feared for his life.

During an interview before he flew back to the country using a passport with the name “Marcial Bonifacio”, Aquino was quoted as saying, “I cannot allow myself to be petrified by the fear of assassination and spend my life in a corner.”

Trying to be as discreet as possible, Aquino’s journey back to Manila had many detours. According to a New York Times piece which detailed the circuitous tour, Aquino first set foot in various countries like Singapore and Taiwan before boarding China Airlines Flight 811 which took him to Manila.

A bullet to the head

Past 1:00 pm on August 21, 1983, the airplane carrying Aquino arrived at the Manila International Airport (now Ninoy Aquino International Airport) as hundreds of supporters waited. He was escorted by soldiers from his seat to a waiting military vehicle that was supposed to take him to Fort Bonifacio.

A few seconds after he exited the airplane, gunshots were heard. As the firing cleared, a bloodied Aquino was seen lying on the ground together with another body later identified as Rolando Galman. According to several reports, Galman was gunned down by Aviation Security Command (Avsecom) personnel.

An autopsy report said the death of Aquino was a result of “brain laceration and intracranial hemorrhage, secondary to gunshot wound at the head.” The fatal bullet, it added, was fired close range.

The death of Aquino sparked outraged from supporters and critics of the Marcos administration alike.

Aquino’s body, dressed in the same bloodied clothes he wore on the fateful day, were visited by thousands of supporters and sympathizers. 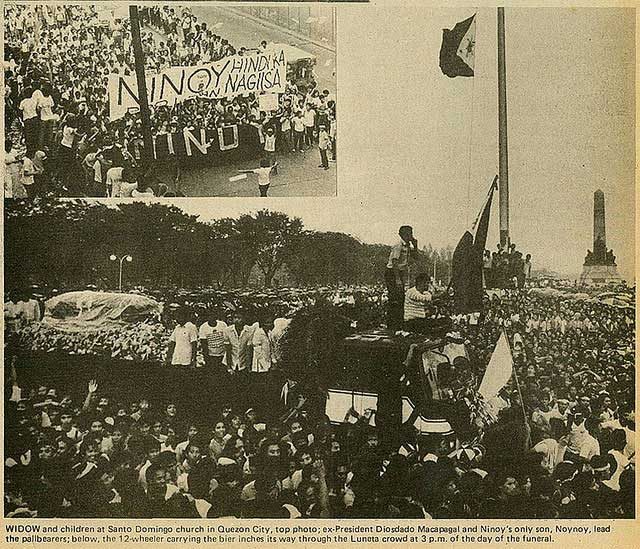 His funeral procession on August 31, 1983 lasted for more than 10 hours. From a funeral mass at the Santo Domingo Church in Quezon City, Aquino’s coffin was transported to his final resting place at the Manila Memorial Park on top of a flat-bed truck adorned with yellow flowers.

According to news reports, despite the heat and later, thunderstorms. thick crowds of more than a million people flocked the streets during the procession to pay their last respects.

Two commissions were created by Marcos to investigate Aquino’s death

Three days after Aquino’s death, on August 24, 1983, Marcos created a commission by virtue of Administrative Order No. 469 to allow a “a free, unlimited, and exhaustive investigation” of the incident.

The Fernando commission, however, was dissolved due to the public criticism.

After almost a year of investigations and public hearings, the Agrava board submitted two reports to Marcos: a minority report penned by Agrava alone and the majority submitted by the other members.

In her minority report, Agrava concluded that the assassination of Aquino was a military conspiracy. She, however, cleared Fabian Ver. Meanwhile, the majority report indicted Ver, General Luther Custodio, Avsecom head General Prospero Olivas, among other members of the Armed Forces.

More than 20 military personnel were charged in 1985 for the murder of Aquino and Galman. However, a Sandiganbayan ruling acquitted all accused a few months later. 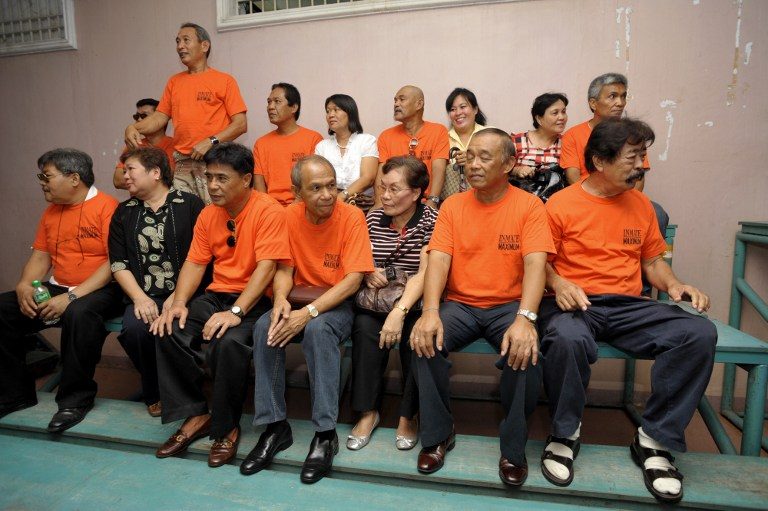 After the 1986 People Power Revolution which toppled the 21-year Marcos regime and subsequently installed Aquino’s widow Corazon as president, a new investigation was opened.

In 1990, the Sandiganbayan convicted 16 military personnel, including Custodio, of murder, and were sentenced to life imprisonment. According to the ruling, based on narrations of two witnesses, it was Rogelio Moreno who “fired the fatal shot” that killed Aquino, not Galman.

In 2005, the Supreme Court denied a petition filed by the convicts to re-open the trial “with finality for lack of merit.”

In the following years, however, the convicts either died or were released from prison.

In 2007, Pablo Martinez was pardoned by then president Gloria Macapagal Arroyo on humanitarian grounds. In 2010, 10 more convicts were released.

Martinez, who upon his release reiterated that Eduardo “Danding” Cojuangco was the mastermind behind the Aquino assassination, was killed in a hit-and-run incident along Quezon Boulevard in 2014. – Rappler.com