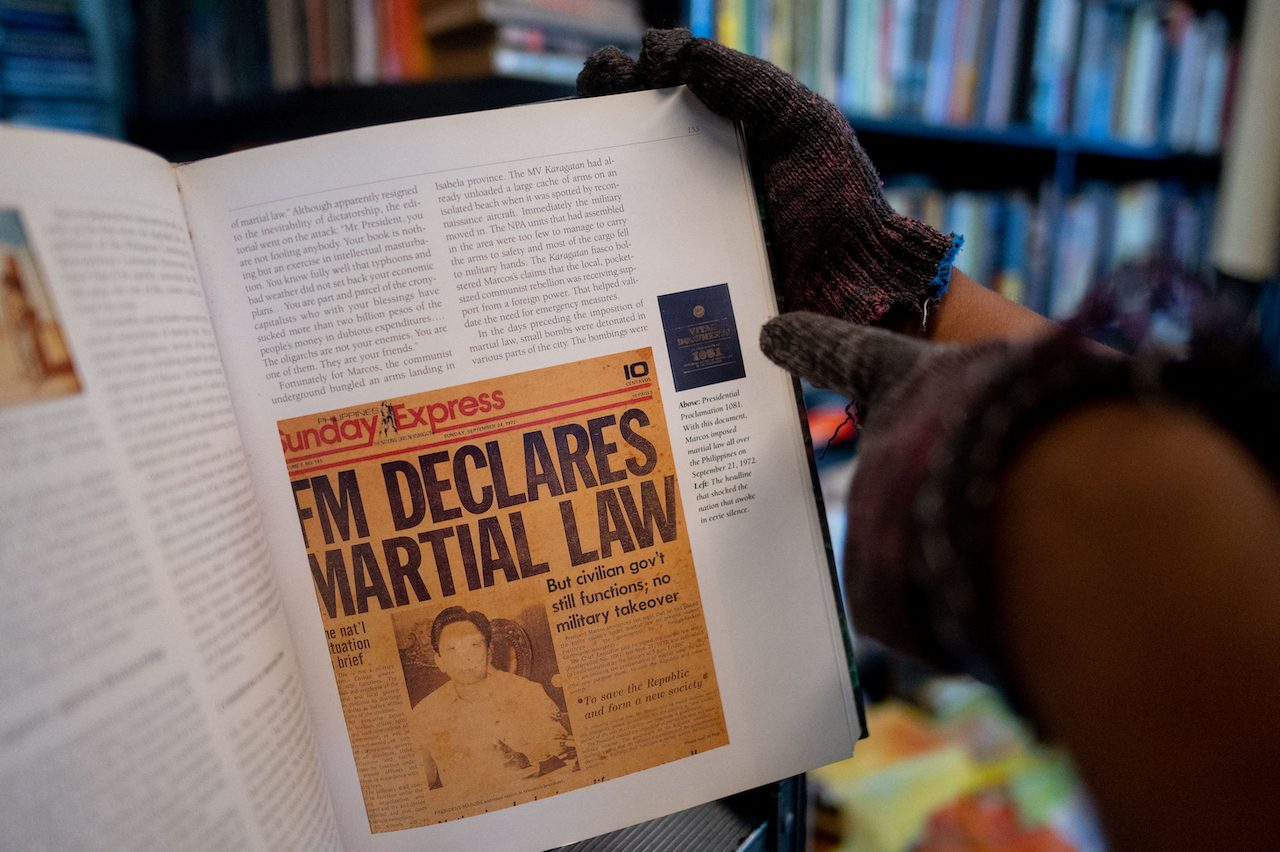 HISTORY. A bookstore owner shows a page of a book containing a newspaper clipping of the declaration of martial law, in Manila, Philippines, on May 19, 2022.

Facebook Twitter Copy URL
Copied
(1st UPDATE) We look back at the Martial Law declaration, and the consequent events that shaped Philippine history

MANILA, Philippines – On the evening of September 23, 1972, the late president Ferdinand Marcos appeared on national television to formally announce that the Philippines was under Martial Law.

This began almost 10 years of military rule in the country. Marcos formally ended Martial Law on January 17, 1981, but it was not until 1986 when democracy was restored – after the dictator and his family were forced into exile, overthrown by a popular uprising that came to be known as the People Power Revolution.

On the anniversary of the declaration of Martial Law, we take a look back at some of the lingering questions behind the declaration, and the consequent events that shaped Philippine history.

Why was Martial Law declared?

When Marcos signed Proclamation 1081 on September 21, 1972, he cited the communist threat as justification. His diary, meanwhile, said the proclamation of Martial Law became a “necessity”, following the supposed ambush of then defense secretary Juan Ponce Enrile.

There were subsequent reports that said the ambush was staged, with the Official Gazette citing Enrile’s admission in 1986 that it was faked to justify the imposition of Martial Law. (READ: Martial Law 101: Things you should know)

There were also indications that the plan to declare Martial Law had long been in the works. According to the Official Gazette, several people had received prior information about Marcos’ plan. The late dictator had also hinted at it in his address to the Philippine Military Academy Alumni Association as early as May 17, 1969 – more than 3 years before the actual declaration.

What happened under Martial Law?

Through various general orders, Marcos effectively put the entire power of government under the rule of one man: his own. He was to lead the nation and direct the operation of the entire government. He ordered the armed forces to prevent or suppress any act of rebellion. Curfew hours were enforced, group assemblies were banned, privately-owned media facilities shuttered. (READ: Marcos’ Martial Law orders)

There are those who hail the discipline and supposed order of the New Society, as Marcos called it, and considered that period as among the “best years” of the Philippines.

Among the myths: that the Philippines enjoyed a golden age under the Marcoses. Various reports and historical accounts debunk this; while it is true that infrastracture spending increased during that period, it came at a staggering cost: plunging the Philippines in billions of dollars in debt. From $8.2 billion in 1977, the country’s debt ballooned to $24.4 billion in 1982 – or within a period of just 5 years. (READ: Marcos years marked ‘golden age’ of PH economy? Look at the data)

The Marcoses also plundered the country’s coffers, with various estimates putting the amount at between $5 billion to $10 billion.

The Presidential Commission on Good Government, the body going after the Marcoses’ ill-gotten wealth, is still recovering this money; over the past 30 years, at least P170 billion have been recovered.

Aside from the billions in illegally amassed wealth, human rights abuses were rampant during those days. (READ: #NeverAgain: Martial Law stories young people need to hear)

About 70,000 people were imprisoned and 34,000 tortured, according to Amnesty International, while 3,240 were killed from 1972 to 1981. During this dark chapter of Philippine history, thousands of people were subject to various forms of torture. Prisoners were electrocuted, beaten up, and strangled. They were burned with a flat iron or cigars. Water was poured down their throats, then forced out by beating. Women were stripped naked and raped, various objects forced into their genitals.

Historian Alfred McCoy wrote about Marcos’ elite torture units, whose specialty was psychological torture and humiliation aside from the physical pain.

It has been many years since then, but the victims have not forgotten – especially as the Marcoses have neither acknowledged their crimes nor made reparations for their sins.

At the Supreme Court hearing on the proposed Marcos burial at the Heroes’ Cemetery, victims were asked to speak before the Court to recount their horrifying ordeals.

The Chief Justice told them: “The Court is listening.” – Rappler.com