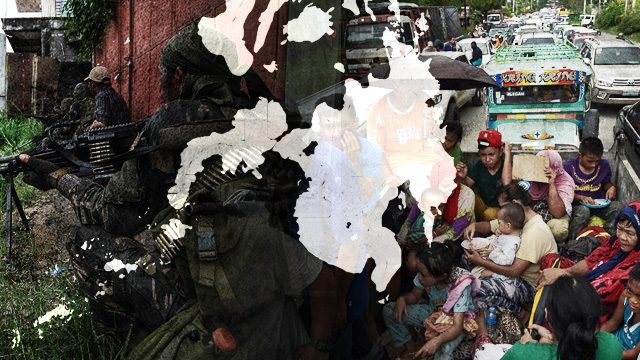 Facebook Twitter Copy URL
Copied
Decades of armed conflict have hampered development in Mindanao, where most of the Philippines' poorest regions are located

They left their homes and livelihood with only a few belongings – some, just the clothes on their backs – to avoid getting caught in the crossfire.

This is the latest crisis in Mindanao, a region that has been scarred by decades of armed conflict. Years and years of battles have left affected communities in dire conditions – struggling to rebuild destroyed homes and reeling from the loss of lives.

President Rodrigo Duterte on May 23 placed the entire Mindanao under martial law for 60 days in order to battle terrorism. (READ: Questions you need to ask about martial law in Mindanao)

Military rule, however, will not address the root of the issue, according to counterinsurgency expert Justin Richmond. He said the government must focus on improving the standard of living in underdeveloped areas in Mindanao to prevent radicalization. (READ: Why PH needs a non-military solution to the ISIS problem)

What are these areas in Mindanao and how has conflict been linked to worsening poverty?

Four out of the top 5 poorest regions in the Philippines are in Mindanao, according to data from the 2015 Family Income and Expenditure Survey (FIES) released by the Philippine Statistics Authority (PSA).

Meanwhile, Region XI (Davao Region) had a poverty incidence of 26.7%.

The poverty figures in these regions in 2015 are above the national average of 26.3%.

ARMM, where Lanao del Sur is located, is the poorest region with at least 59% of its 3,781,387 population living below the poverty threshold.

Lanao del Sur’s poverty worsened in the past decade

The widespread poverty is also evident in the fact that 8 out of the 10 poorest provinces in the country in 2015 were in Mindanao. From 2006 to 2015, a Mindanao province had the highest poverty incidence rate.

This is not the case with Lanao del Sur where Marawi City – the center of the clashes between government forces and the Maute Group – is located.

The poverty rate in the province, which has a population of 1.05 million, drastically rose in the past decade.

From just 44% in 2006, 74.3% of residents in Lanao del Sur lived below the poverty threshold in 2015, making it the poorest among all provinces in the Philippines, according to data from the FIES.

Effects of Estrada’s all-out war in 2000

Former president and now Manila Mayor Joseph Estrada on May 25 urged Duterte to declare an all-out war against terrorists in Mindanao, adding that peace talks do not work.

During that time, poverty in Mindanao became worse. According to data from the PSA, 20 out of the 40 poorest provinces were in Mindanao, including all the provinces in the ARMM where the conflict then was concentrated.

Meanwhile, data from the World Food Programme (WFP) show that over 40% of families in Central Mindanao were displaced at least once between 2000 and 2010.

Jobs or sources of livelihood are also scarce in conflict-hit areas. More often than not, clashes destroy farms and fisheries which many families depend on.

With the lack of resources to rebuild, families affected by conflict may fall deeper into poverty.

Decades of insurgency and terrorism have hampered the development of Mindanao. Can Duterte, the country’s first Mindanaoan president, finally lift Mindanao from poverty? – Rappler.com