Who is Larry Gadon, the man behind one Sereno impeachment complaint? 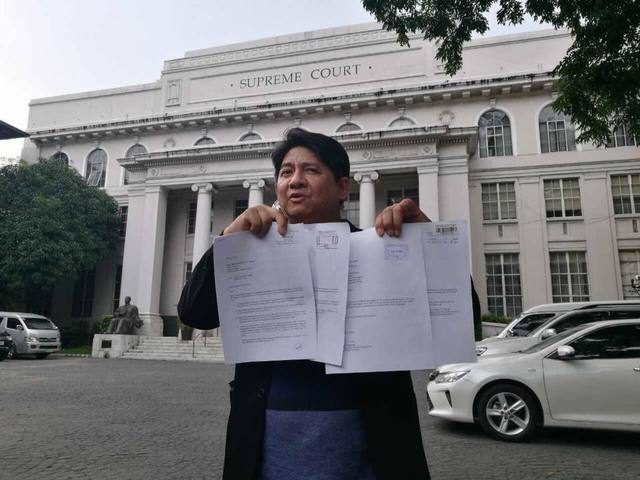 MANILA, Philippine – The impeachment complaint against Chief Justice Maria Lourdes Sereno has taken another step as the House justice committee on Thursday, October 5, found that it has “sufficient grounds.”

In the complaint filed by lawyer Lorenzo “Larry” Gadon on August 30, he pointed out Sereno’s alleged failure to be truthful in her Statement of Assets, Liabilities, and Net Worth (SALN), together with tax misdeclarations, and unauthorized expenses under the Supreme Court. (LOOK: Why petitioners want Sereno impeached)

The camp of Sereno, when they presented the 85-page verified answer, called the allegations “fake news.” (READ: How Sereno answered her impeachment complaint)

But who is Gadon – the man behind an impeachment complaint against Sereno which was endorsed by 25 lawmakers?

A lawyer by profession, Gadon’s official profile on his website said that he serves as “management and legal consultant” of companies involved in realty development, food manufacturing, information technology, aviation and safety technology, and health care, among others. He was admitted to the bar in 1993.

But before identified as the man behind the first valid complaint against the country’s Chief Justice, Gadon was widely-known as part of the legal team of former president and now Pampanga representative Gloria Macapagal Arroyo.

He has represented Arroyo in various press conferences, especially during her hospital arrest for 4 years at the Veterans Memorial Medical Center over plunder charges.

In fact, it was Gadon whom international lawyer Amal Alamuddin Clooney sent an email to regarding the United Nations Working Group on Arbitrary Detention opinion on Arroyo’s detention. (READ: At Arroyo case press con: ‘Is Amal Clooney the wife of George?’)

After 4 years of being part of the Arroyo team, Gadon said he left to be able to run for senator under the Kilusang Bagong Lipunan (KBL) – the party known for its affiliation with the late dictator Ferdinand Marcos – during the 2016 elections. He was also an adopted candidate of Lakas-CMD.

A Daily Tribune article published on October 2015 reported that Gadon identified himself as a “true-blooded Marcos loyalist.”

He supposedly ran to expose and correct history that he claimed is geared for the Aquinos. A defeat was not the only thing that came out of the campaign season as Gadon also earned the ire of many Filipinos for his remarks deemed ‘hateful’ against Muslims.

The statement was aired during a pre-election interview conducted by GMA News TV on March 2016.

(I will kneel before the Moro Islamic Liberation Front to beg them not to launch attacks, I will cry stones and blood, and on the 11th time and they still refuse, I will attack them and bring the entire Philippine army there and kill them all. I will burn their houses and eradicate their clans, even if my soul burns in hell later.)

Aside from criticism from the public, the remarks led to a disbarment case filed by lawyers Algamar Latiph and Musa Malayang against Gadon for improper conduct.

On October 3, they went to the SC to follow-up on the case via a letter addressed to Senior Associate Justice Antonio Carpio. (READ: Lawyers revive disbarment complaint vs Larry Gadon at SC)

Gadon, however, dismissed it as a nuisance case, adding that he is now, “at any rate,”  a friend of Muslims.

Post-2016, Gadon enjoys an “alliance” with the administration. His Facebook page is full of photos taken during events, such as the “General Assembly of Republic Defenders,” often featuring other notable allies of President Rodrigo Duterte.

He is also the president of the Pro-Duterte Constitutional Reformers to Federalism. 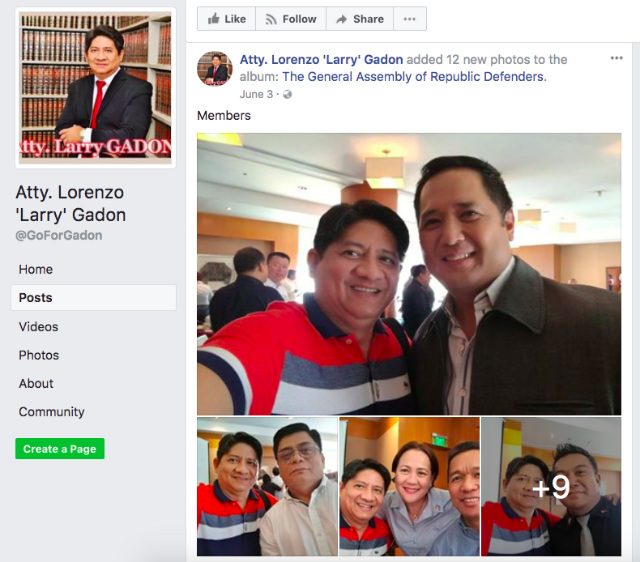 Gadon also offered to be the lawyer of the Duterte Youth which planned to file cases of unjust vexation and theft against musician Jim Paredes over their tense confrontation during the celebration of the EDSA People Power Revolution in February 2017. (READ: Duterte Youth to sue Jim Paredes, gets SolGen’s backing)

Now, like former lawmaker Jacinto “Jing” Paras, Gadon busies himself working on cases against what the Duterte administration deemed as “opposition.”

It is yet to be known, however, if there is probable cause to pursue the impeachment complaint he filed against Sereno as the House committee is set to deliberate on this matter in November.

What will be Gadon’s next move? – Rappler.com