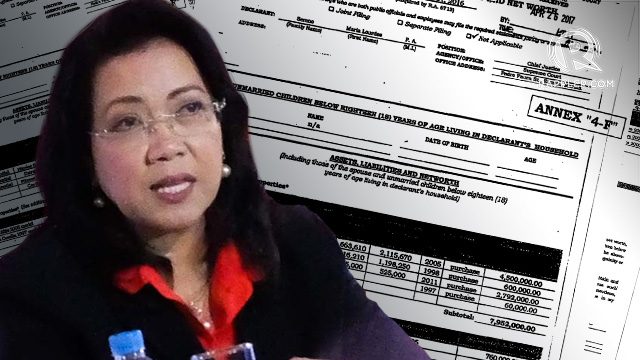 MANILA, Philippines – Did Chief Justice Maria Lourdes Sereno misdeclare her earnings in her Statement of Assets, Liabilities, and Net Worth (SALN)?

That is the “strongest” accusation against Sereno, said Misamis Occidental 2nd District Representative Henry Oaminal in the previous impeachment hearing held last November 22. The hearing will resume on Monday, November 27.

Sereno’s predecessor, the late Renato Corona, was impeached and ousted in 2012 due to non-disclosure of peso and dollar deposits in his SALN.

From Sereno’s SALNs, and her verified answer filed before the House committee on justice, Rappler summarized her earnings and expenses, along with what lawmakers have said.

Gadon first alleged that Sereno earned P37 million in fees when she was part of the legal team that defended the government in an arbitration case against Philippine International Air Terminals Company Incorporated (Piatco).

During the House hearing, Gadon admitted to only making a “mental calculation” of the earnings from documents he saw at the Office of the Solicitor General.

This is how Sereno said she spent that money: Of the items in the table above, the Filinvest house and Toyota Altis are specifically declared.

The furniture and medical expenses are lumped in with the other expenses, according to the Sereno camp. So is the P3.6 million she said she spent in “tithes and offerings” to her Church.

The stocks and investments are also not specified. By 2016, Sereno had declared a net worth of P24.2 million, with P8.3 million of that amount as investments.

“We do not see receipts, we do not see documents that the amounts were in fact spent on the purchases in her defense,” Garcia said in the last hearing.

She also said there needs to be proof that Sereno only received P30 million.

Aside from Piatco, Sereno had other sources of income from 2004 to 2009. In an earlier interview, the Chief Justice’s spokesperson, lawyer Josa Deinla, said she earned another P3 million during that period.

“The rules do not require a listing of specific properties as in ‘yung isa-isa gano’n (as in one by one),” Deinla said.

While Garcia said she does not “doubt it,” she said she wants receipts.

Before the Supreme Court (SC), Sereno was a professor of the University of the Philippines (UP) College of Law.

Gadon wanted the House committee on justice to subpoena Sereno’s records and SALNs from when she was in UP.

But Garcia said that is not necessary. “Let us not pick on whether the Chief Justice paid taxes when she was a law professor, because at that time she was not an impeachable officer and could not have committed an impeachable offense. Let us focus on her actions the minute she joined the Supreme Court,” Garcia said.

Leyte 3rd District Representative Vicente Veloso said taxes from Sereno’s purchase of a house and lot should have had a separate entry on her SALN. During the last hearing, Veloso said the city assessor should be subpoenaed.

Oaminal also moved to subpoena officials and documents from the Bureau of Internal Revenue (BIR) to prove that Sereno paid all the right taxes.

These prompted Ako Bicol Representative Rodel Batocabe to say that the House seems to be on a “fishing expedition” because neither the lawmakers nor Gadon can pinpoint which of Sereno’s SALNs supposedly contain misdeclarations.

“If they were indicated in general terms, the bottomline figure is there anyway. I don’t think there would be any problem in the Chief Justice’s specifications of items listed as investments. She has the documents and I imagine that by certificates of stock, there can be no non-disclosure as to these things,” lawyer Carlo Cruz, one of Sereno’s spokespersons, said in an earlier interview. – Rappler.com