EXPLAINER: What the Supreme Court TRO denial means for Trillanes 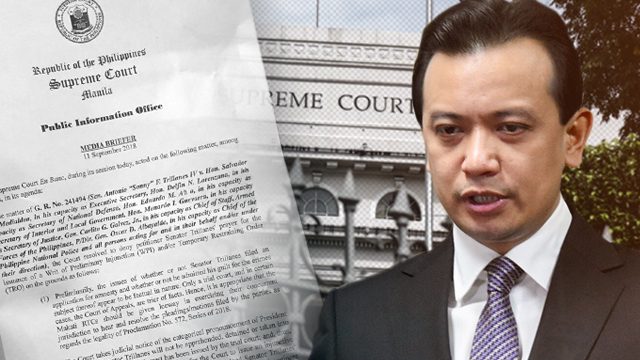 Excerpts from the SC’s resolution announced by the Court’s spokesperson said the en banc “takes judicial notice of the categorical pronouncement of President Rodrigo Duterte that Senator Trillanes will not be apprehended, detained or taken into custody unless a warrant of arrest has been issued by the trial court.”

The SC takes Duterte’s word as an ironclad promise that Trillanes will not be arrested without a court-issued warrant.

“It is appropriate that the Makati Regional Trial Courts (RTCs) should be given leeway in exercising their concurrent jurisdiction to hear and resolve the pleadings/motions filed by the parties as regards the legality of Proclamation No. 572,” the SC said.

The immediate implication of this is that the ball is now in the court of the Makati Regional Trial Court (RTC) Branches 148 and 150, which will hear this Thursday and Friday, respectively, the justice department’s motions to issue an arrest warrant against Trillanes.

Trillanes’ lawyer Rey Robles said this is one of the best possible outcomes for the senator, citing the SC’s clear statement that Trillanes should not be arrested without a court-issued warrant.

(If the Supreme Court speaks and it’s still defied by the AFP and the Palace, there really is no respect for institutions in this country anymore.)

One thing is for sure, the SC would not have decided on the main petition questioning the constitutionality of the proclamation right away. What could they have done?

The best outcome for Trillanes is for the SC to grant him a TRO, which would have meant the proclamation would cease to be effective, at least for the moment. This would also halt the proceedings at the lower court, and take away the immediate possibility of an arrest warrant being issued.

That’s why Presidential Spokesperson Harry Roque’s tone was victorious when he reacted to the SC decision on Tuesday.

The outright denial of a TRO gives the go-signal for the lower courts to resolve the requests for an arrest warrant, which Trillanes would not want, considering that he does not acknowledge that the Makati RTC still has jurisdiction over him.

It is the Trillanes camp’s position that the 2011 amnesty dismissed both the coup d’etat and rebellion charges, meaning, Branches 148 and 150 can no longer reopen trial and entertain motions.

In fact, the lower court’s jurisdiction is the silver lining that Justice Secretary Menardo Guevarra sees in the denial of a TRO.

“The Supreme Court has also acknowledged the trial courts’ continuing jurisdiction over the coup d’etat and rebellion cases, notwithstanding the alleged ‘finality’ of the orders of dismissal based on the grant of amnesty to Sen Trillanes,” Guevarra said in the statement.

However, Constitutional Law professor Tony La Viña does not agree.

“The Court did not imply that at all. At best, one can interpret it as a subtle nudge but only the zealous prosecutor would see that,” La Viña said.

La Viña said that the Makati RTCs would have to wait for the SC to decide on the constitutionality of the proclamation before they can proceed to possibly reopen long-dismissed cases.

The Integrated Bar of the Philippines (IBP) said that if the Makati RTCs reopen the case, this would violate Trillanes’ right against double jeopardy.

La Viña believes that the worst possible outcome for Trillanes would have been silence from the Supreme Court on the TRO request.

“Because not ruling on the TRO would mean Trillanes can be arrested any time,” La Viña said.

Robles said they are now discussing the option for Trillanes to finally go home after 8 days of being holed up in his Senate office, trying to avoid a warrantless arrest. – Rappler.com