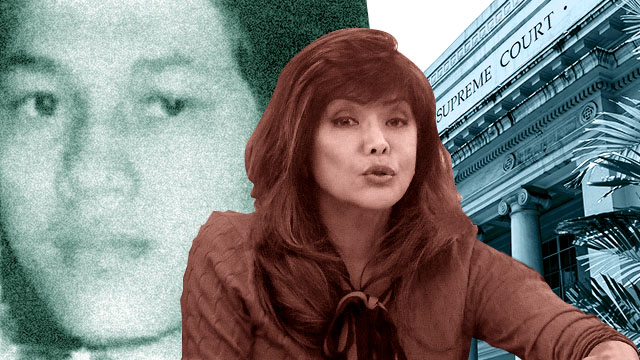 MANILA, Philippines – Imee Marcos, daughter of the late dictator Ferdinand Marcos Sr and now Ilocos Norte governor, would have had to pay $4.16 million in damages for the “wrongful death” of a student – a critic of hers and her father – had the Supreme Court not blocked the payment in 2006.

Archimedes Trajano – 21 years old in 1977 and a Mapua student who boldly questioned Imee in a forum at the Pamantasan ng Lungsod ng Maynila why she deserved to be a youth representative – was found mauled and dead on the streets of Manila on September 2, 1977.

A Hawaii court ordered Imee to pay the family of Trajano $4.16 million in damages.

But in a ruling in 2006, the Supreme Court blocked the payment because it found that a lower court sheriff was not diligent enough in serving the summons on Imee personally, so the substituted service on a condo unit caretaker was invalid. This voided the court’s enforcement of the payment. (READ: LIST: False claims of Juan Ponce Enrile on Martial Law)

What happened before? In 1991, the District Court of Honolulu, Hawaii, found Imee civilly liable for the “wrongful death of deceased Archimedes Trajano committed by military intelligence officials of the Philippines allegedly under the command, direction, authority, supervision, tolerance, sufferance and/or influence of defendant (Imee Marcos) pursuant to the provisions of Rule 39 of the then Revised Rules of Court.”

The Honolulu court ordered Imee to pay the Trajano family $4.16 million in damages and attorneys fees.

Being a judgment of a foreign court, Trajano’s mother Agapita had to go to a local court to enforce the ruling and compel Imee to pay.

Believing that Imee lived in a condominium in Pasig, Agapita filed a motion before the Pasig Regional Trial Court (RTC) for the recognition and enforcement of the Honolulu ruling.

Based on several Supreme Court decisions, the local court would acquire jurisdiction over Imee “either upon a valid service of summons or the defendant’s voluntary appearance in court.”

The Pasig RTC, on July 15, 1993, served the summons on Imee in the said address in Pasig. When Imee did not answer, the RTC declared her to have been in default.

This is when Imee made her move. (READ: Imee to Marcos family critics: ‘Move on’ from Martial Law)

What was Imee’s arguments? She told the RTC that she was already a resident of Singapore, and the condominium in Pasig was not her “dwelling, residence or regular place of business” as strictly defined by the rules of court, and the person who received the summons was “neither a representative, nor a resident of the place.”

A certain Macky de la Cruz, who was identified by the court sheriff as the caretaker of the condominium unit, received the summons.

Imee presented a witness who testified that she visited the condo only twice, and that it is owned by Queens Park Realty.

Agapita’s camp presented a lawyer who deposed Imee’s brother Ferdinand “Bongbong” Jr in another case. Bongbong had said there that Imee lived in the said condominium. There were also entries of Imee in the logbook of the same condominium.

Imee, who was named in the case as Imee Marcos-Manotoc as she was at the time married to Tommy Manotoc, said that the “Mrs Manotoc” in the logbook “may not even be” her, but  Tommy’s mother.

Even if it was her, she said, “Mrs Manotoc” appeared only 27 times out of the 109 entries in the condominium logbook,“hence, the infrequent number of times she allegedly entered Alexandra Homes did not at all establish plaintiffs position that she was a resident of said place.”

The RTC rejected all her claims. So Imee went to the Court of Appeals (CA). In 1997, the CA upheld the RTC’s findings.

“The CA also rejected petitioners’ Philippine passport as proof of her residency in Singapore as it merely showed the dates of her departure from and arrival in the Philippines without presenting the boilerplates last two (2) inside pages where petitioners residence was indicated. The CA considered the withholding of those pages as suppression of evidence. Thus, according to the CA, the trial court had acquired jurisdiction over petitioner as there was a valid substituted service pursuant to Section 8, Rule 14 of the old Revised Rules of Court,” the Supreme Court said, quoting the CA.

Imee went to the Supreme Court, where she eventually won in 2006 through a ruling by the Third Division, penned by retired justice Presbitero Velasco Jr, with concurrences from retired justices Leonardo Quisumbing, Conchita Carpio Morales, and Senior Associate Justice Antonio Carpio.

In the Supreme Court, whether Imee’s real place of residence was the condo in Pasig was not even the point anymore, as the former presidential daughter won on an invalid substituted service.

How did the Supreme Court rule? “Due to non-compliance with the prerequisites for valid substituted service, the proceedings held before the trial court perforce must be annulled Substituted service,” said the SC.

Under the law, it is preferred that summons be served personally on the defendant. But a substituted service is allowed if reasons are acceptable.

The Rules of Court do not define how much time it allows the sheriff to try and serve the summons personally, before he or she can resort to a substituted service.

The Sheriff wrote in the Return that “on many occasions several attempts were made to serve the summons…but to no avail as defendant is usually out of her place and/or residence or premises.”

The Supreme Court said: “A meticulous scrutiny of the aforementioned Return readily reveals the absence of material data on the serious efforts to serve the Summons on petitioner (Imee Marcos) in person. There is no clear valid reason cited in the Return why those efforts proved inadequate, to reach the conclusion that personal service has become impossible or unattainable.”

“On the issue whether petitioner (Imee Marcos) is a resident of Alexandra Homes, Unit E-2104, at No. 29 Meralco Avenue, Pasig City, our findings that the substituted service is void has rendered the matter moot and academic. Even assuming that Alexandra Homes Room 104 is her actual residence, such fact would not make an irregular and void substituted service valid and effective,” said the SC.

In that ruling, the SC reversed both the CA and the RTC and allowed Imee to ignore the Honolulu ruling, leaving the Trajanos without compensation for the brutal killing of Archimedes. – Rappler.com

READ stories on the 46th anniversary of Martial Law