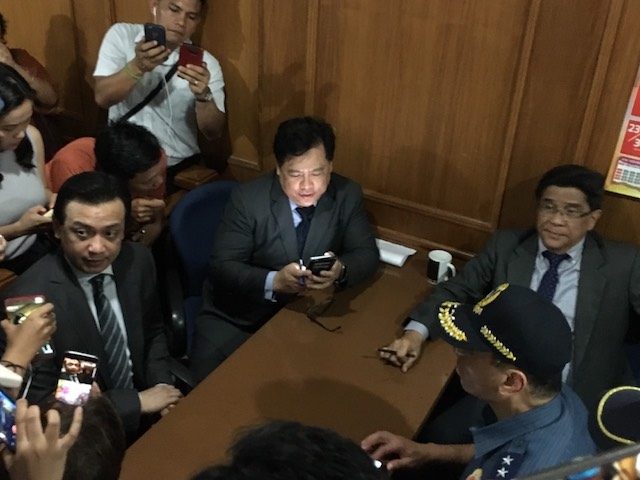 Facebook Twitter Copy URL
Copied
A military officer swears under oath that she received, accepted, and processed Trillanes’ amnesty application, but Judge Alameda says it’s a substitute document that has no probative value

Failure to file the form, which contains the required admission of guilt, is President Rodrigo Duterte’s basis for voiding Trillanes’ amnesty.

This was ultimately Alameda’s basis for reopening the rebellion charges that he previously dismissed in 2011 pursuant to the amnesty granted to Trillanes by former president Benigno “Noynoy” Aquino III.

“It has now become glaringly clear that Senator Trillanes failed to substantiate his claim that he filed his application for amnesty,” Alameda said in his 22-page order issued on Tuesday.

Alameda disregarded several supporting documents submitted to him by Trillanes, particularly the sworn affidavit of Colonel Josefa Berbigal who was the head of the secretariat of the Department of National Defense (DND) ad hoc committee at the time when Trillanes applied for amnesty.

“I was the one who personally received Senator Trillanes’ amnesty application on January 5, 2011,” said Berbigal.

Berbigal added: “Before accepting his application, I asked Senator Trillanes to read the pre-printed statement contained therein making a general admission of his guilt for his alleged offenses before asking him to take his oath for the said amnesty application.”

For Alameda, however, Berbigal’s affidavit and similar supporting affidavits are “substitute documents” that are “barren of probative weight.”

Trillanes’ lawyer Rey Robles earlier said that their circumstantial evidence reach the standard of proof that the senator really did file an application form.

Even the ad hoc committee head, Honorio Azcueta, swore under oath that Trillanes’ application for amnesty “underwent the necessary and the applicable procedures.”

“The argument may be acceptable if satisfactory proof was presented showing the existence of the official amnesty application form duly received by the Ad Hoc DND Amnesty committee,” said Alameda.

Alameda’s basis is the Supreme Court decision on Magdayao vs People, which says:

“If the document is in the custody or under the control of the adverse party, he must have reasonable notice to produce it. If after such notice and after satisfactory proof of its existence, he fails to produce the document, secondary evidence may be presented as in the case of its loss.”

For Alameda, Trillanes was not able to present “satisfactory proof” of  the application form’s existence, despite photographs and news footage of him submitting the form on January 5, 2011, to the DND.

But Alameda gave merit to the prosecution’s presentation of an authenticated GMA News article quoting Trillanes as saying in a chance interview: “I would like to qualify that we did not admit to the charge of coup d’etat or anything na finile sa amin because we believe na hindi iyon nararapat (that was filed against us because we believe that’s not the right thing to do).”

“Seemingly, the statements and declarations made by Senator Trillanes when interviewed by GMA News and published with the heading ’Trillanes avails of admesty, admits breaking rules’ are in conflict and irreconcilable with his adamant position that he applied for amnesty and admitted his guilt,” Alameda said.

Robles had earlier said that Trillanes cannot be expected to keep a copy of his application form, since it is the DND which was tasked to receive and store it.

Solicitor General Jose Calida was able to secure a certification from the military’s personnel office that “there is no available copy” of Trillanes’ application form.

Robles said the burden of proof should not be on Trillanes, but on the prosecution.

But Alameda did not agree to a single argument raised by Trillanes’ camp.

Instead, he granted almost completely all the arguments of the Department of Justice (DOJ), including the argument that Trillanes is not entitled to the right against double jeopardy because the dismissal of his case in 2011 is void, given that the amnesty is void.

Just like what the DOJ said, Alameda said “it is not even necessary for the state to take any steps to vacate or void a judgment or order. It may simply be ignored.”

The legal basis for the “simply ignore” argument is Guevarra vs Sandiganbayan, where the Court found the anti-graft court to have acted with grave abuse of discretion when it ordered the dismissal of a case. The dismissal in that situation was found to be null and void.

Constitutional law expert retired justice Vicente Mendoza said that only courts, and not presidents, can declare anything null and void, just as the Supreme Court did in Guevarra vs Sandiganbayan.

Trillanes slammed Alameda’s decision as the death of democracy.