Feb 6, 2019 9:51 PM PHT
Jodesz Gavilan
Facebook Twitter Copy URL
Copied
(UPDATED) At least 46 party-list groups participating in the 2019 polls have at least one nominee linked to a political clan or a powerful figure in the country 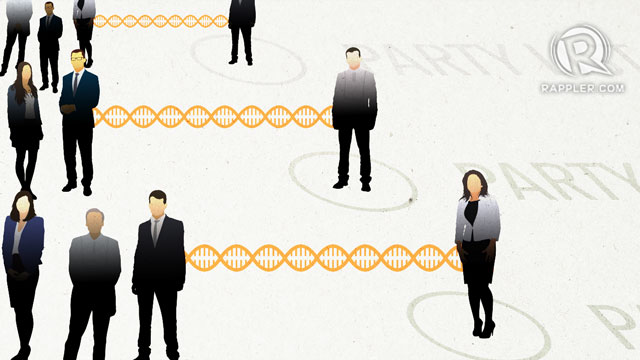 MANILA, Philippines (UPDATED) – The composition of party-list groups seeking to join the House of Representatives has long been the object of scrutiny in the lead up to the elections.

The 1987 Philippine Constitution states that 20% of House seats are allotted for nominees of party-list groups. The rosters of party-list representatives in previous Congresses had been hit for being recycled lists of people already in power.

In fact, according to election watchdog Kontra Daya, “nearly half” of the 134 groups joining the 2019 elections do not represent the marginalized sectors.

But in 2013, the Supreme Court upheld what it deemed was the Constitution’s intent: that the party list is not intended for marginalized sectors only.

Rappler found that at least 46 party-list groups participating in the 2019 polls that have at least one nominee are linked to a political clan or a powerful figure in the country.

In total, there are at least 65 nominees who are either members of powerful political families, have links to either a government official (incumbent and former), or have a relative also running for office.

The chart below shows the network of these 65 nominees of party-list groups. The blue circles represent the nominees while the yellow ones indicate the political or public figures they are connected to. Hover over each point to see their links and other relevant information.

Who are these nominees? Below are their connections and backgrounds.

Peter Abaya has held various government positions in the past, including being undersecretary of the Department of Energy and the Office of the President under Gloria Macapagal Arroyo. He is the brother of former representative and transportation secretary Joseph Emilio Abaya and son of former representative Plaridel Abaya. The elder Abaya is also running to represent YACAP Party-list in the 2019 polls. 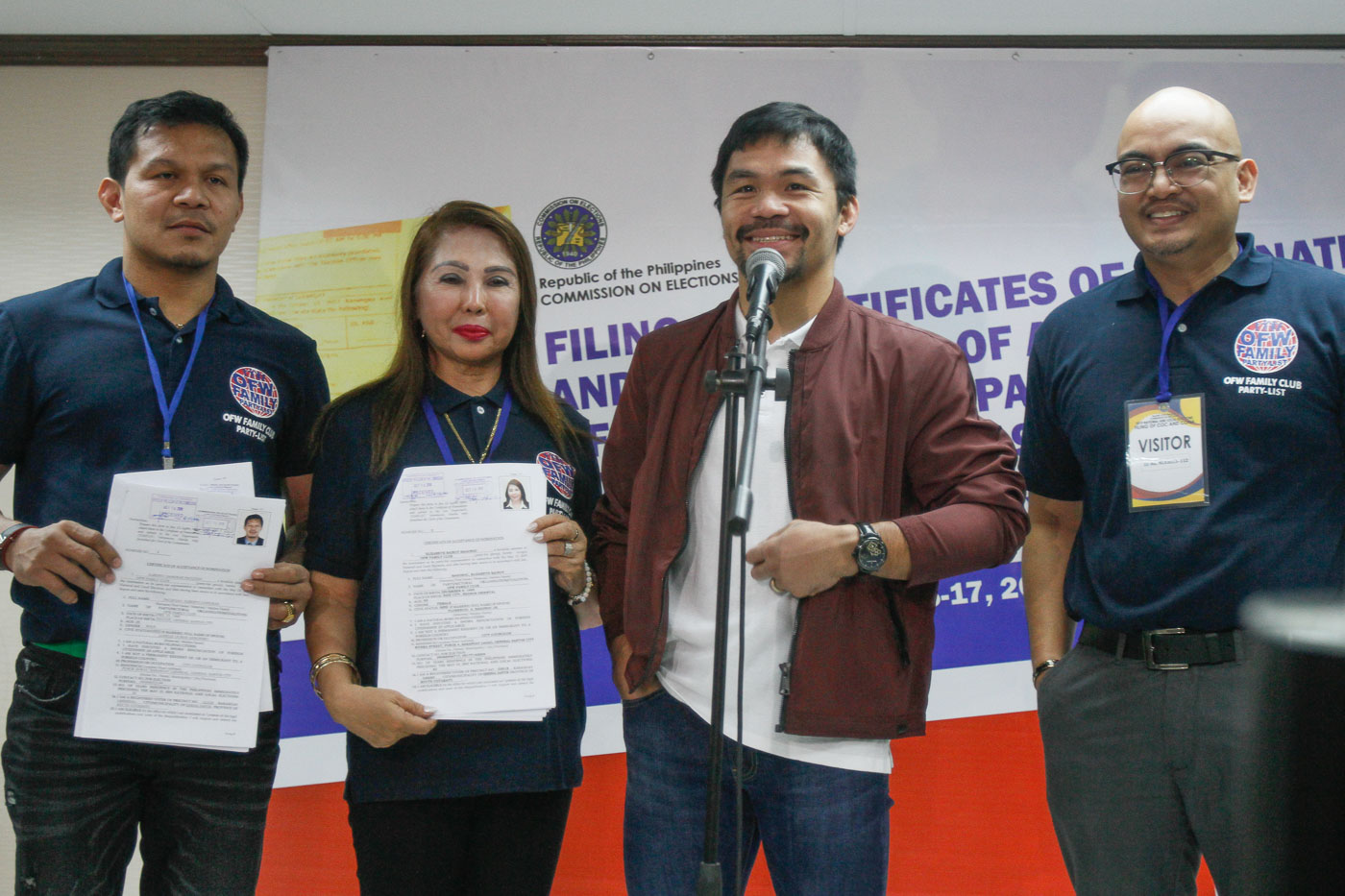 Alberto “Bobby” Pacquiao is the brother of Senator Manny Pacquiao and has been involved in politics since 2013. He has served as barangay (village) councilor and in 2016, became a councilor in General Santos City. He worked as a professional boxer like his brother prior to joining government.

Montserrat Romulo is a member of the influential Romulo clan. She is the daughter of former senator and foreign affairs secretary Alberto Romulo. She is also the sister of Tourism Secretary Bernadette Romulo Puyat and former Pasig representative Roman Romulo. She had previously run for Congress.

Jericho Nograles is a member of the powerful Nograles clan of Davao. He is the son of former House speaker Prospero Nograles and brother of representative and Cabinet Secretary Karlo Nograles.

Margarita Ignacia B. Nograles is the daughter of former House speaker Prospero Nograles. She is also the sister of PBA Representative Jericho Nograles and representative and Cabinet Secretary Karlo Nograles. 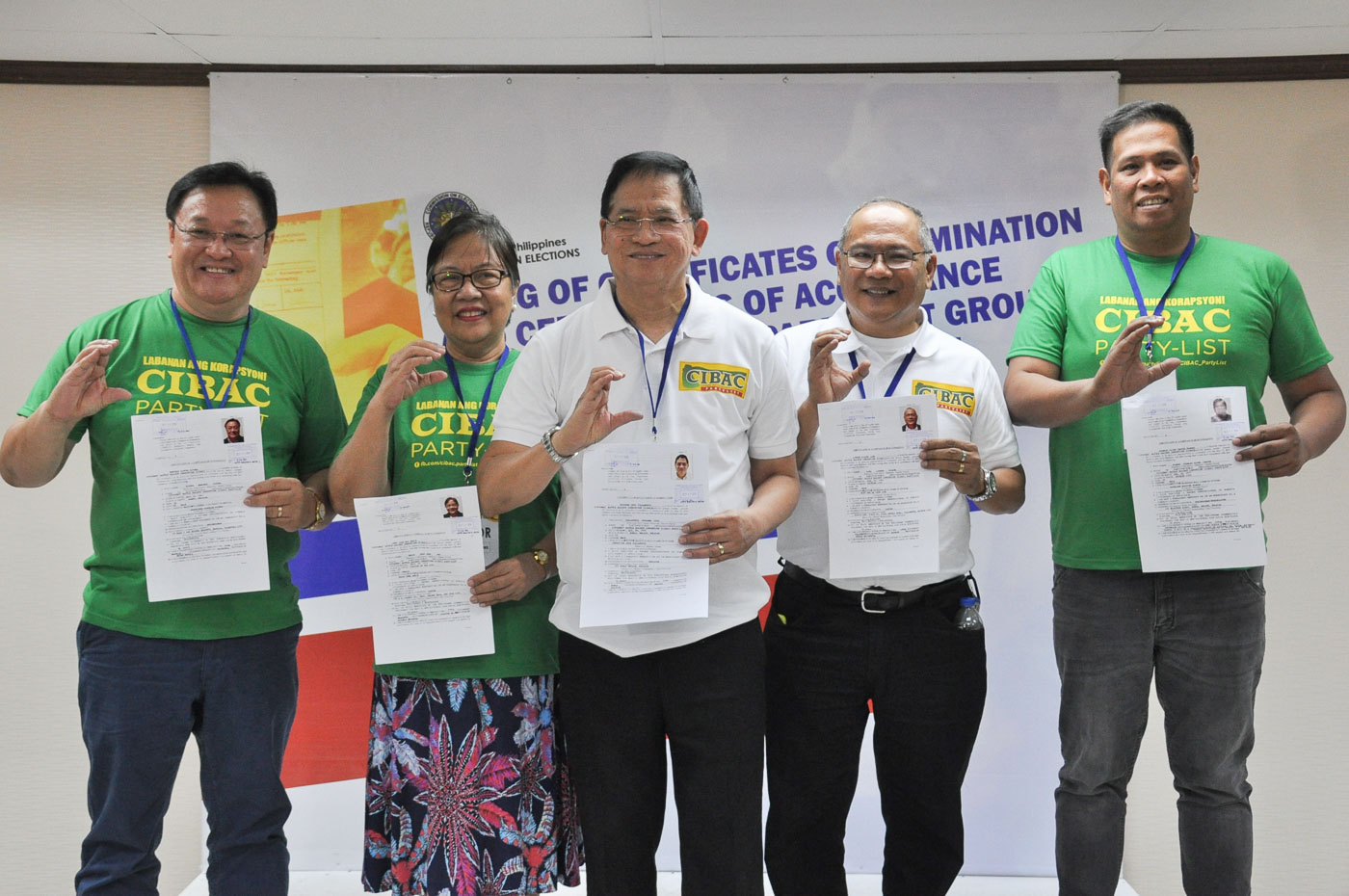 Jesus is Lord (JIL) founder Eddie Villanueva is the father of Senator Joel Villanueva. His daughter Eleanor Tugna is the incumbent Bocaue, Bulacan mayor while his son Eduardo Jr served also as mayor for 4 terms. The elder Villanueva ran for president in 2004 and 2010.

Ramp Uy is a member of the influential Uy clan in Samar. He also served as vice governor of Northern Samar, elected as the “youngest” in the region in 2010.

Rodolfo Tuazon is a member of the influential Tuazon family. He served as 3-term representative of Samar 1st District from 1992-2001.

Eduardo Veloso is a former Leyte representative who was indicted in 2017 in relation to the Priority Development Assistance Fund (PDAF) or pork barrel scam. He’s also allegedly a member of the “Gang of Five” which reportedly received P2 million to delay a congressional inquiry into the collusion of telco networks Globe and Smart over the reduction of free text messages, according to a  Newsbreak piece published in 2001.

Grace Evadone is the wife of incumbent Eastern Samar Representative Ben Evardone who is running for governor. 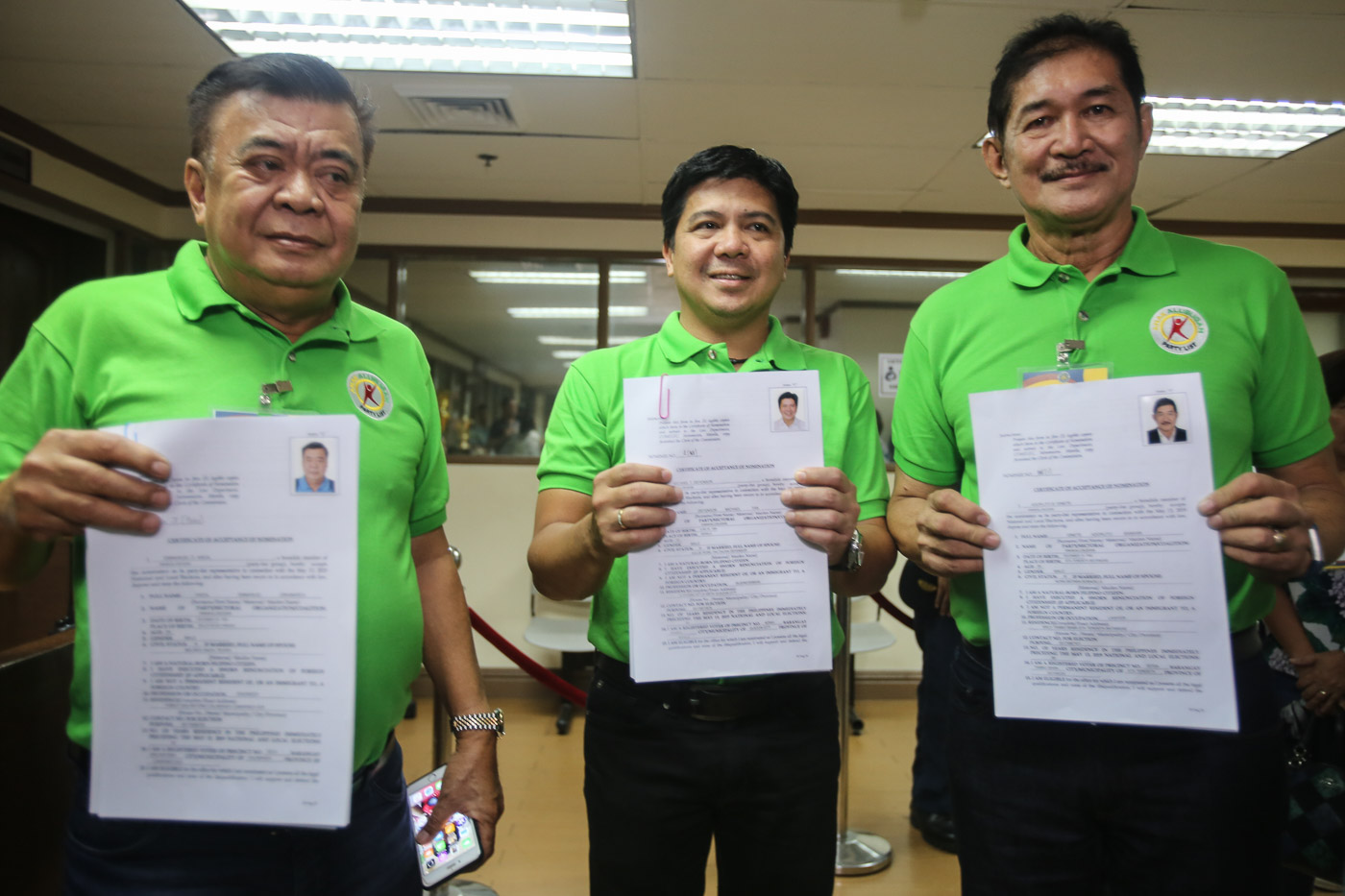 Mike Defensor is the son of former Quezon City representative Matias Defensor Jr. His brother John is running for QC 3rd district councilor. The younger Defensor himself also served as QC councilor from 1991 to 1995, and as 3rd district representative from 1995 to 2001, before joining the Cabinet of former president Gloria Macapagal Arroyo.

Incumbent Angeles City Mayor Edgardo Pamintuan is a member of the influential Pamintuan clan in Pampanga and had served as vice governor in the late 1980s. His son and namesake Edgardo Jr also serves in the city council. The younger Pamintuan is also running for city vice mayor.

Narciso D. Santiago III is the son of the late senator Miriam Defensor Santiago. His father is the current presidential adviser on revenue enhancement, a post he also held under the Arroyo administration.

Chito Valmocina is the barangay captain of Barangay Holy Spirit in Quezon City. He is also the husband of QC 2nd District Councilor Estrella Valmocina.

Vicente Belmonte Jr is a member of the influential Belmonte clan. He is the nephew of former House speaker Feliciano “Sonny” Belmonte Jr. His wife Irene is incumbent Quezon City 4th District Councilor. 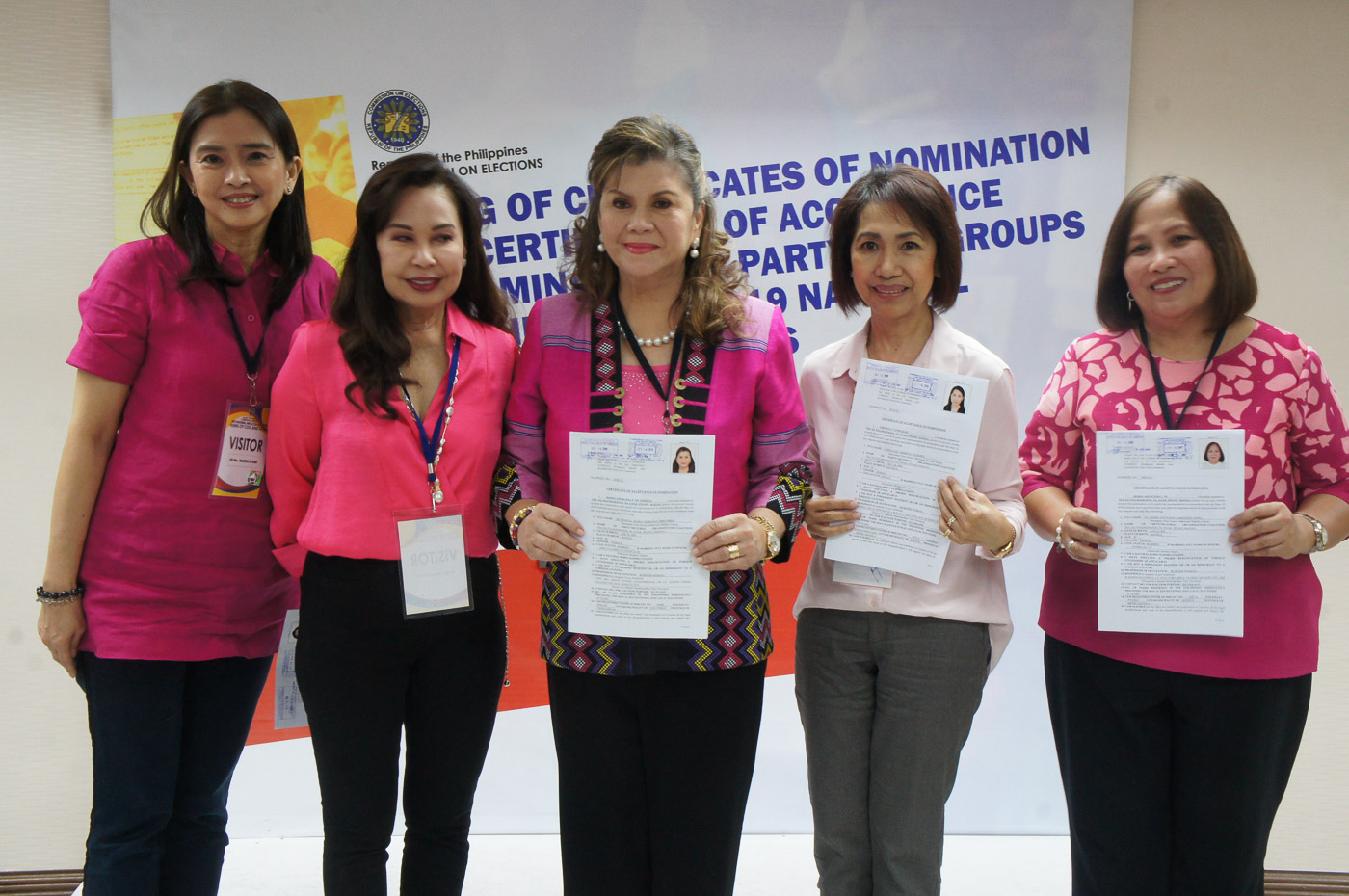 Gina de Venecia is the wife of former House speaker Jose de Venecia Jr. She previously served as Pangasinan 4th district representative from 2010 to 2016. Her son, Christopher de Venecia, replaced her in the position in 2016 and is seeking reelection in 2019.

Acmad Tomawis is the former ALIF party-list representative, serving from 2007 to 2014. 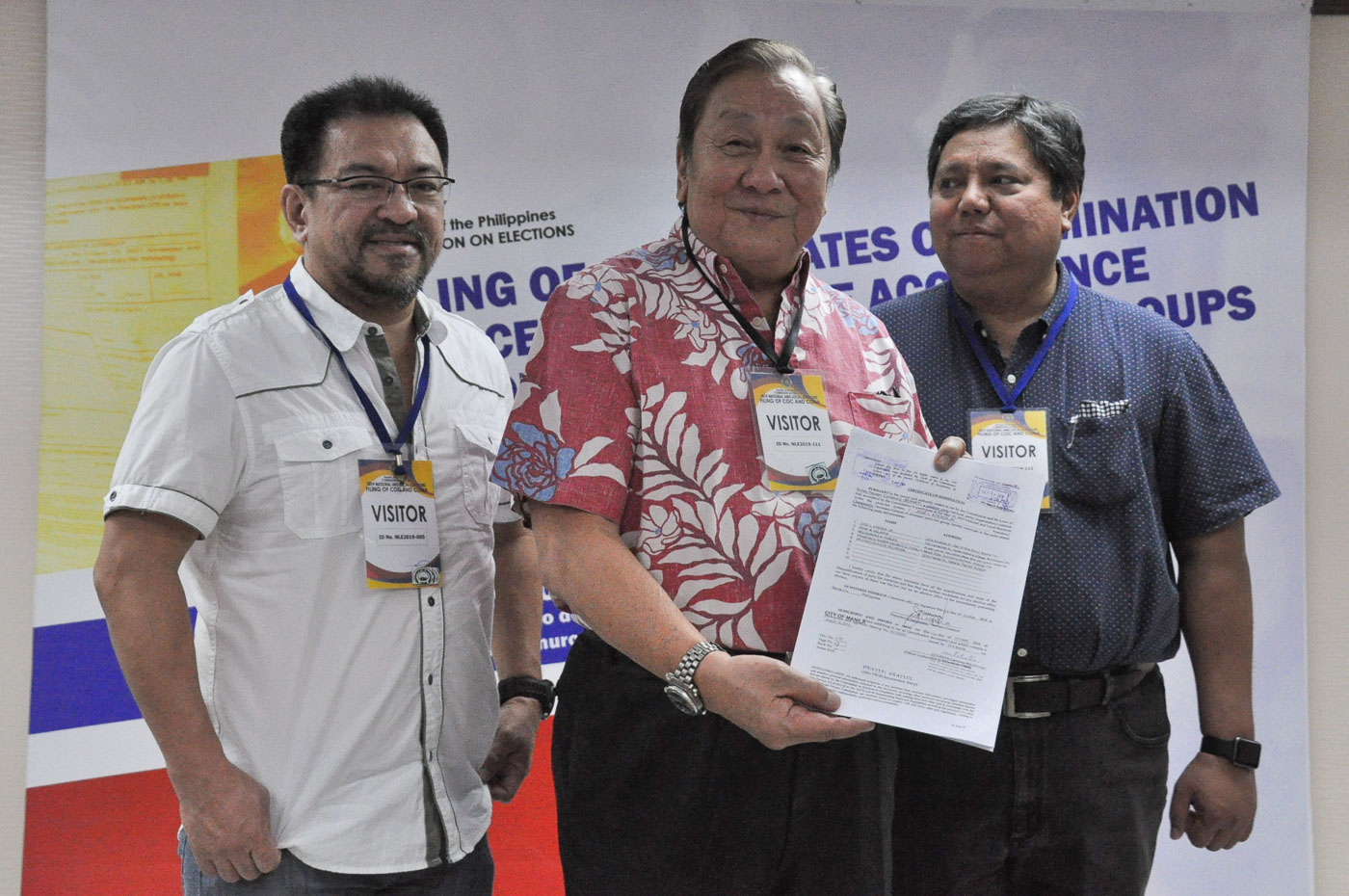 Incumbent Buhay representative Jose “Lito” Atienza is the former long-time mayor of the city of Manila. His children have held several government positions: his sons served as city councilors – Ali from 2013 to 2016, Kim from 1995 to 2004 – while his daughter Arlene Maile is incumbent 3rd district councilor.

Francis Cusi is the son of Energy Secretary Alfonso Cusi.

Rudys Fariñas is the son of former House majority leader Rodolfo Fariñas of the influential political clan in Ilocos Norte. His sister, Ilocos Norte 1st district board member Ria Cristina Fariñas, is seeking to replace her father in Congress.

Lira Fariñas is a member of the influential Ilocano clan through her husband Jami who is the son of the late Laoag vice mayor Michael Fariñas. Her mother-in-law, Chevylle Fariñas, is the incumbent Laoag mayor.

Former AVE representative Eugelio Magsaysay is a member of the Magsaysay clan. He is the son of the late Senator Genaro Magsaysay, the brother of former president Ramon Magsaysay. 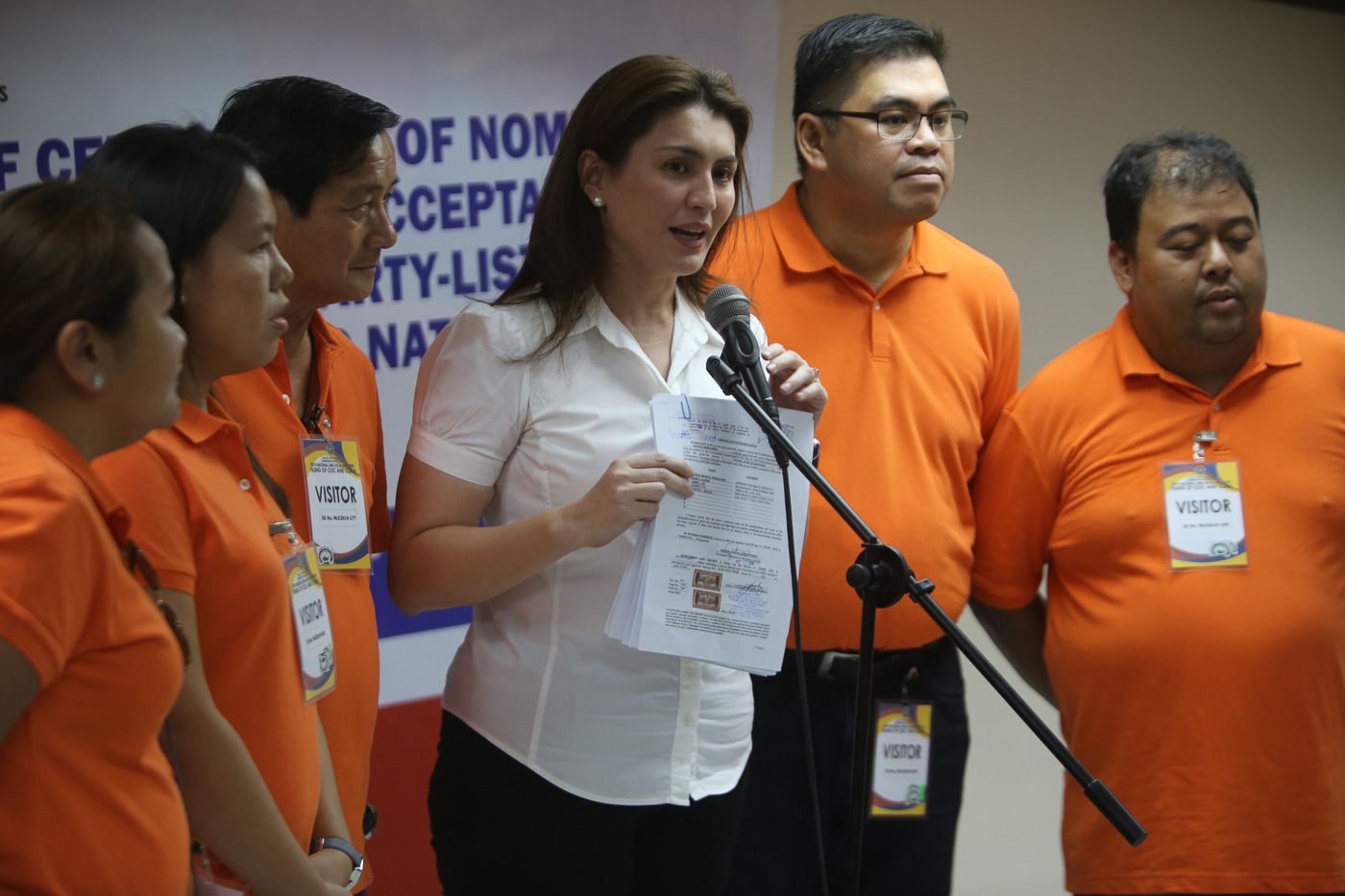 Incumbent Leyte 1st District Representative Yedda Marie Romualdez is linked to the influential Romualdez clan through her husband former representative Martin Romualdez who lost his Senate bid in 2016. The two are both seeking to join the House of Representatives as Martin is aiming to take over Yedda’s seat.

Jocelyn Tulfo is the wife of radio personality Raffy Tulfo. She is the sister-in-law of former tourism secretary Wanda Tulfo Teo. 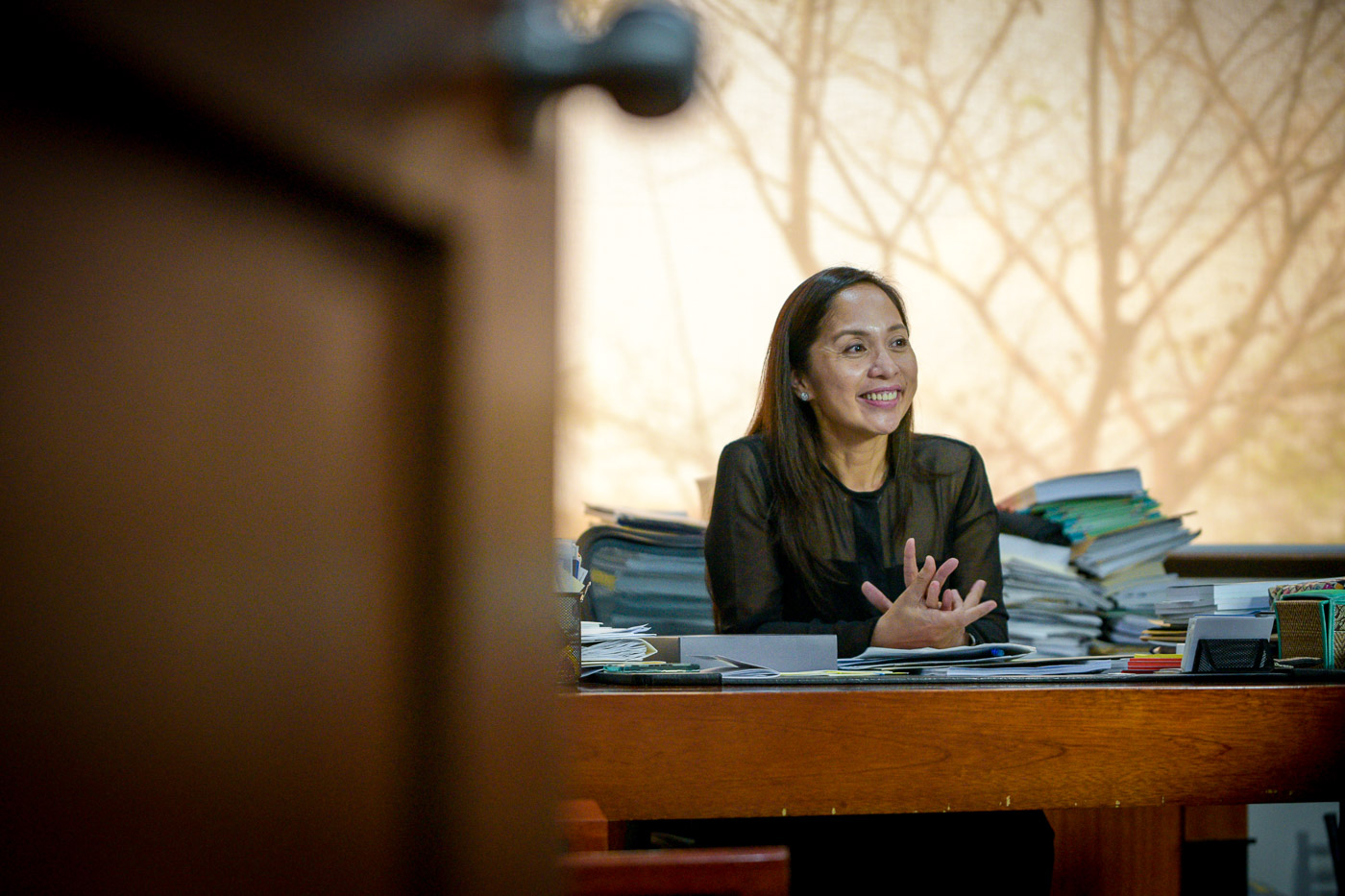 Incumbent AAMBIS-OWA representative Sharon Garin is a member of the influential Garin clan of Iloilo. She is the daughter of former lawmaker and incumbent Guimbal Mayor Oscar Garin Sr and San Joaquin Mayor Ninfa Serag-Garin.

Hernan Biron Jr is part of the Biron political clan in Iloilo. His family – including his father, former Barotac Nuevo mayor Hernan Biron Sr, and brother, incumbent representative Ferjenel Biron – has held Iloilo’s 4th District representative seat for many years. His brother is seeking the gubernatioral seat of Iloilo.

Jimmy Garin is the nephew of former lawmaker Oscar Garin Sr and cousin of incumbent Representatives Richard and Sharon.

Kathleen Briones is the daughter of former Agap representative Nicanor Briones, who ran for Batangas governor in 2016 but lost.

Mary Grace Rodriguez is the wife of incumbent Cagayan de Oro 2nd District Representative Maximo Rodriguez Jr, who once represented Abante Mindanao in Congress prior to running for a legislative district position.

Maria Mangudadatu is part of the influential Mangudadatu political clan of Maguindanao. She is the sister-in-law of incumbent Governor Esmail Mangudadatu.

Michael Edgar Aglipay is the son of former PNP chief Edgar Aglipay. He is also the brother of Diwa Representative and Justice Undersecretary Emmeline Aglipay Villar, making him the brother-in-law of Public Works Secretary Mark Villar.

Rafael Alunan is the son of former interior secretary Raffy Alunan, who is also running for senator in the 2019 polls.

Ana Emelita Alvarez is the daughter of former House speaker Pantaleon Alvarez. Her mother Emelita is running as METRO representative.