MANILA, Philippines (UPDATED) – The last time that the opposition failed to win even a single seat in legislative* elections was in 1938 during the time of then-president Manuel L. Quezon.

Otso Diretso’s Mar Roxas, also an early survey ranker like Aquino, is down in 16th place with only 9,577,323 votes.

The opposition, including Otso Diretso and progressive slate Labor Win, is set to suffer a heartbreaking loss in the mid-term elections, with not one making it to the top 12.

In an interview, political scientist Ronnie Holmes pointed out, however, the stark difference in political contexts between Quezon and the time of President Rodrigo Duterte. For one, Holmes said Quezon “was more dominant in Philippine politics during the Commonwealth to the extent that Quezon defined the framing of the Philippine Constitution.” 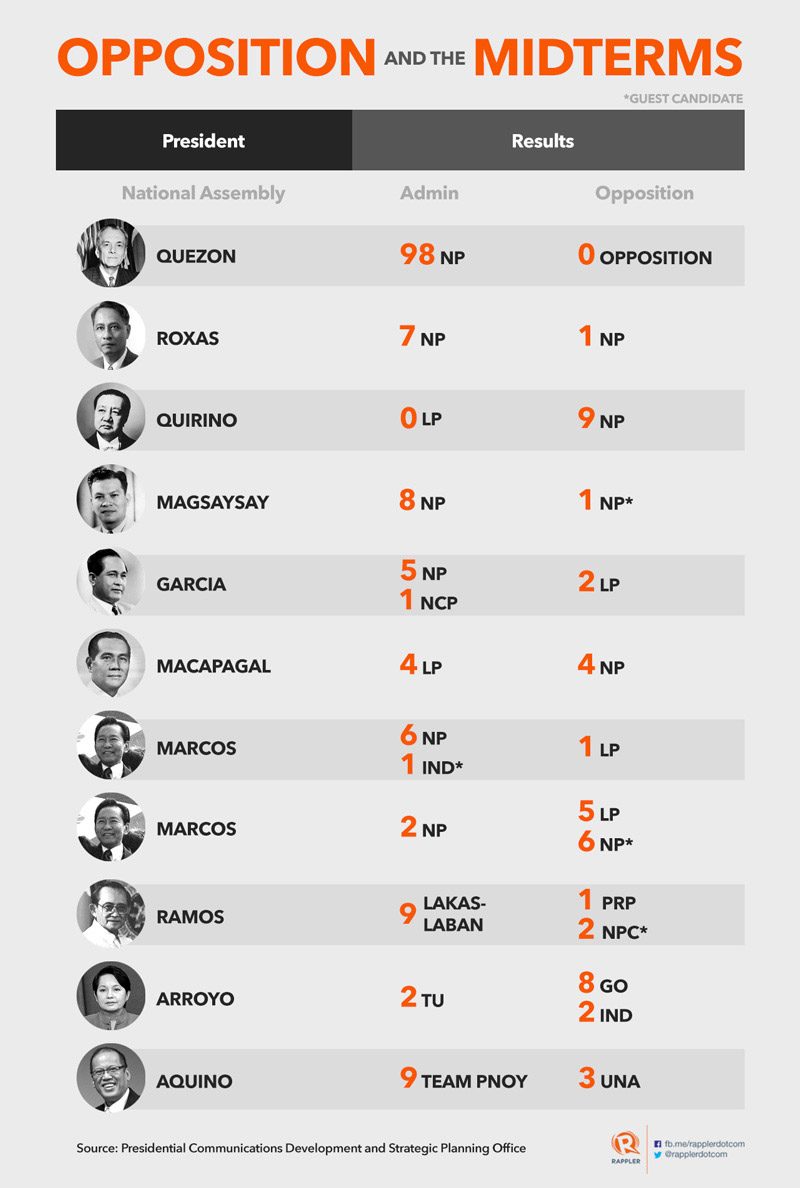 In the time of Duterte

What is noticeable however is that after the Commonwealth, no president, not even Ferdinand Marcos, was able to wipe out the opposition.

In modern history, the zero win for 2019 is worse than in the Marcos years.

In 1967, two years after Ferdinand Marcos won as president, former senator Benigno “Ninoy” Aquino II was the only opposition member to win a seat at the upper chamber.

With only one opposition in the Senate, Marcos was able to declare Martial Law in 1972.

With the minority bloc in the current Senate reduced to only 4 – Franklin Drilon, Francis Pangilinan, Risa Hontiveros and the detained Leila de Lima – can the Senate be expected to uphold most of Duterte’s policies, even his threats of a nationwide martial law?

Holmes said it will make the votes of independent senators like Grace Poe and the likes of Nancy Binay, Joel Villanueva, and Panfilo Lacson crucial.

“I think there’s still a chance that it will be independent on key issues, like charter change,” Holmes said.

Holmes added: “Even in the past, the Senate has always been more independent. The people even crossed party lines. You’d expect the same level of altruistic and independent action from all the 24 senators.”

Midterm elections are regarded as a referendum on the sitting president, a way to gauge the public’s approval of the current administration.

Holmes said that the 12-0 win of Duterte’s allies “is not really healthy, but not something that’s surprising.”

A reason behind this is a weak party system, Holmes said, where voters don’t vote for party values, but a person.

“When you ask them what political party they favor, they give the name of a politician. Political parties are abstract to them. As I said, when you talk about one party not garnening that many seats, it’s really a function of a long-term problem that the linkage between parties and citizens is pretty weak,” he said.

Historical connections abound in this situation, with the same surnames – the Aquinos and Marcoses.

With Bam Aquino and Liberal Party key figure Mar Roxas out of the scene, new players from the Marcos clan surface.

Imee Marcos is set to win as senator, ranking 8th. Her son Matthew Manotoc is going to replace her as governor of Ilocos Norte. Eugenio Angelo Barba is going to be 2nd District Representative. – Rappler.com

Editor’s Note: A previous version of this story mistakenly referred to senatorial elections in 1938, when there was no Senate to speak of then. What was in place was a unicameral National Assembly, which in 1938, began to consider restoring the Philippine Senate. It was in 1941 when the first biennial elections were held and the Senate was restored as the Upper Chamber.