Jun 7, 2019 7:47 PM PHT
Pia Ranada
Facebook Twitter Copy URL
Copied
Capuyan, whose last job was to fight communist insurgency, and who was implicated in the smuggling of shabu, is tapped by Duterte to head the indigenous peoples commission 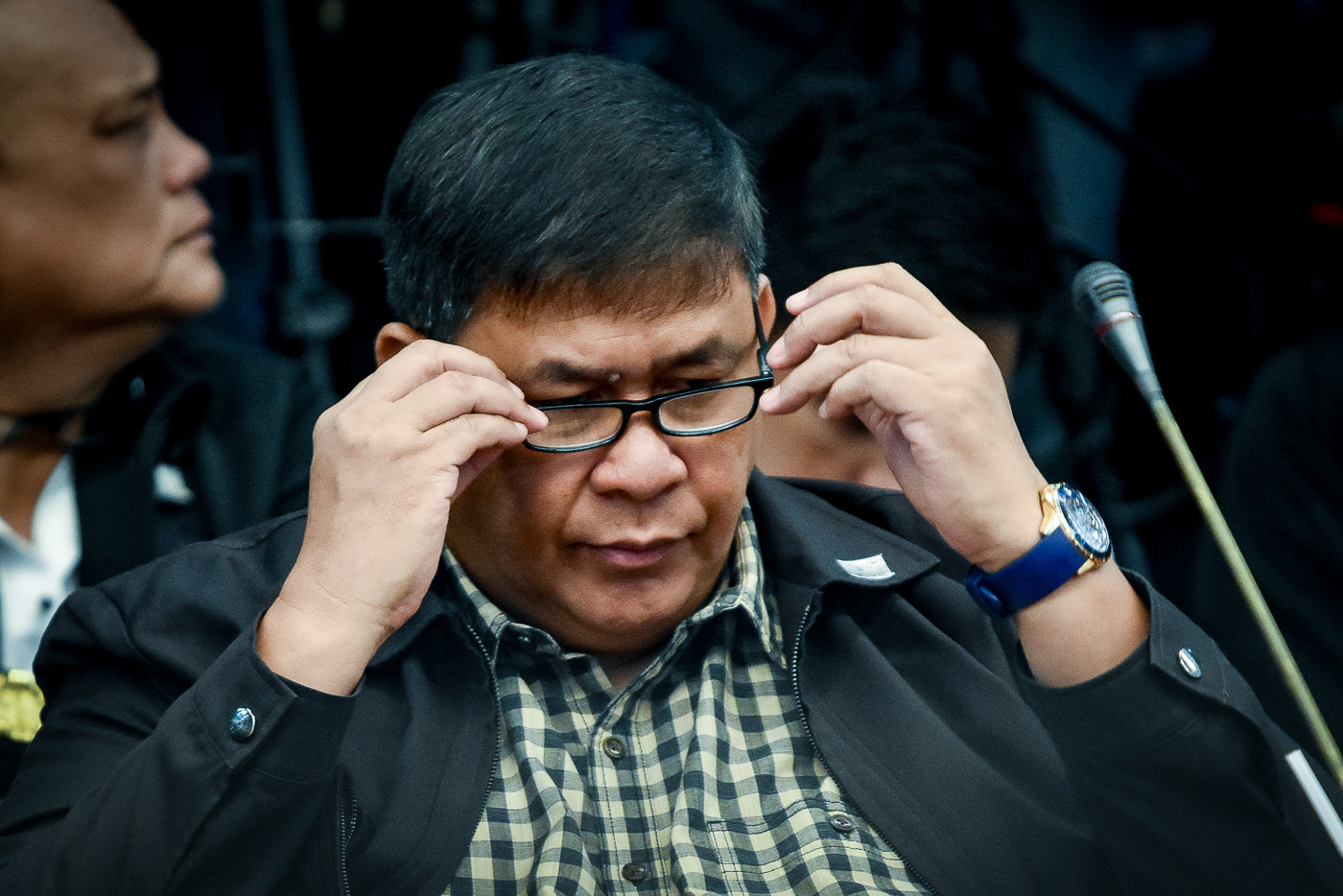 Yet again, President Rodrigo Duterte has chosen a retired military officer to head a civilian agency. And not just any agency but one which revolves around indigenous communities – a sector in society that has had its share of tense brushes with the armed forces.

But there are other issues. Is Capuyan qualified, given that an NCIP chairman must have proof that he or she comes from an IP group? Is tapping a former general with experience in fighting communist insurgency related to Duterte’s own recent remarks about “hamletting” Lumads to “protect” them from the New People’s Army?

Let’s tackle the issues surrounding Capuyan’s appointment one by one.

The Implementing Rules and Regulations of the law that created the NCIP (Indigenous People’s Rights Act) states that the chairperson is chosen from a pool of 7 commissioners appointed by the President.

Commissioners, and thus the chairperson as well, should “come from one of the 7 ethnographic/cultural areas.”

They are even required to submit their genealogy, to the 4th degree, which must have been certified by traditional leaders.

Then, they also need to present a sworn statement describing their experience in ethnic affairs with an IP community or government agency involved in IP concerns “for at least 10 years.”

Former presidential adviser on the peace process Jesus Dureza attested to Rappler that Capuyan is a “member of a tribe in Davao del Norte.”

He could not recall the exact name of the tribe but some news articles identify Capuyan as a Manobo.

Executive Secretary Salvador Medialdea is yet to reply to Rappler’s query on Capuyan’s membership in an IP group.

As to experience with IP affairs, Capuyan was appointed by Duterte as presidential adviser for indigenous peoples concerns in April 2018.

Dureza vouched for Capuyan’s qualifications to lead the NCIP.

“No doubt he had long exposure and expertise on tribal matters,” he said, adding that he himself tapped Capuyan as a consultant back when he was Mindanao Development Authority chairperson during the Arroyo administration.

Capuyan was also a “pro bono” consultant for Dureza when he was Presidential Assistant for Mindanao during the Ramos presidency. At the time, Capuyan was still an active-duty soldier.

Part of Capuyan’s experience in dealing with IPs while he was on active military duty was leading Task Force Gantangan where the AFP tapped Lumad leaders to help fight NPA rebels.

The task force, which was set up during the Arroyo administration, led to the formation of armed groups like Alamara and Magahat-Bagani which supposedly protected IP communities from the NPA.

Lumad is a term referring to IP groups in Mindanao.

Sandugo is fiercely contesting Capuyan’s appointment to the NCIP, saying he played a major role in the “reign of terror” in Mindanao.

Sandugo also warned that Capuyan’s indebtedness to Duterte means he would pave the way for Chinese-funded projects in IP ancestral lands.

“As NCIP chief, retired colonel Capuyan can easily coerce communities to approve a fake ‘free prior and informed consent’ (FPIC) for the construction of the Chico River Water Pump Project in Pinukpok, Kalinga and the Kaliwa Dam Project in General Nakar, Quezon and Tanay, Rizal,” they said in a statement.

FPIC refers to a document attested to by an indigenous peoples (IP) community that the consensus of all members was obtained without any external manipulation and is in accordance with their customary laws and practices.

But it seems it’s this type of experience that Duterte values in Capuyan. After all, his last government post before NCIP was as executive director in an anti-insurgency office created by Duterte.

Called the National Secretariat of the National Task Force to End Local Communist Armed Conflict, the office seeks to prevent, at the local level, people from joining the NPA.

It’s supposed to do this by ensuring the provision of social services, employment opportunities, and improved quality of life in communities affected by armed communist conflict.

Given the President’s past remarks, his main concern with the IPs is their vulnerability to being influenced by communists.

He once threatened to bomb Lumad schools for supposedly teaching Leftist ideology. He told Lumad leaders to prepare for relocation so he can better keep them away from the NPA. In December last year, he “refined” this idea, suggesting he would “hamlet” indigenous peoples into areas guarded by the military and police.

Hamletting is among the human rights violations committed under Ferdinand Marcos’ Martial Law as documented by Task Force Detainees.

Dureza, back when he was Duterte’s peace process adviser, had claimed that “75%” of Lumad are recruited by the NPA.

Ever since he ended peace talks with the Left, Duterte has been hell-bent on cracking down on communists. He declared them terrorists and said his martial law in Mindanao is partly to rid the southern region of the NPA.

His advisers have asked international organizations like the European Union to stop funding groups they claim are backed by the Communist Party of the Philippines.

4. Who did Capuyan replace?

Capuyan’s appointment means the departure of his predecessor, Leonor Oralde-Quintayo.

In January, the Presidential Anti-Corruption Commission (PACC) admitted it was investigating Quintayo for alleged corruption and complaints that she was neglecting to address concerns of a particular IP group.

“There are allegations against her by certain IP groups of Central Luzon about alleged violation of the requirement of free, prior, and informed consent and non-release of shares from locators to the IPs,” PACC commissioner Manny Luna told Rappler.

However, he does not want to assume that these complaints led to Quintayo getting replaced.

“I can only surmise that the President wants a new leadership at NCIP. The appointment of Allen Capuyan is a welcome development for us in the PACC,” he said.

The NCIP leadership is yet another civilian post that is now occupied by a retired military man. Capuyan’s appointment calls to mind a similar appointment of former military chief Carlito Galvez Jr as Presidential Adviser on the Peace Process, a position that, like the NCIP chairmanship, has to do with the Left. Former army chief Rolando Bautista now leads the Department of Social Welfare and Development, an agency once at the helm of a Leftist, Judy Taguiwalo.

Based on Rappler’s tally, almost 50  major civilian government posts have been given to retired military or police by President Duterte.

Though his NCIP posting is already his 4th appointment under Duterte, Capuyan can’t shake off the controversy from his first job at the Manila International Airport Authority – the P6.4-billion shabu smuggling incident.

At the time the shabu was brought in, Capuyan was MIAA assistant general manager for security and emergency services.

At congressional hearings, he was accused by customs broker Mark Taguba of providing him, via mail, tariff codes that were supposed to give Taguba access to the green lane or express lane, which exempts shipments from X-ray inspection. This is supposedly how Taguba was able to smuggle in shabu from China.

Taguba said Capuyan was the “Big Brother” in text messages wherein he was arranging the smuggling of contraband. (READ: From Hello Garci to ‘Big Brother’: Who is Allen Capuyan?)

The Mindanao Indigenous Peoples Council of Elders and Leaders (MIPCEL), in a statement meant to defend Capuyan, dismissed the shabu issue, saying Capuyan is yet to be convicted over it.

Like Capuyan, government personnel tagged by Taguba in the smuggling, were reappointed by Duterte, despite his avowed zero-tolerance for even “one whiff” of corruption. These include former customs officials Nicanor Faeldon, Gerardo Gambala, Milo Maestreocampo, and Ariel Nepomuceno. – Rappler.com