Who voted for Duterte in the Supreme Court? 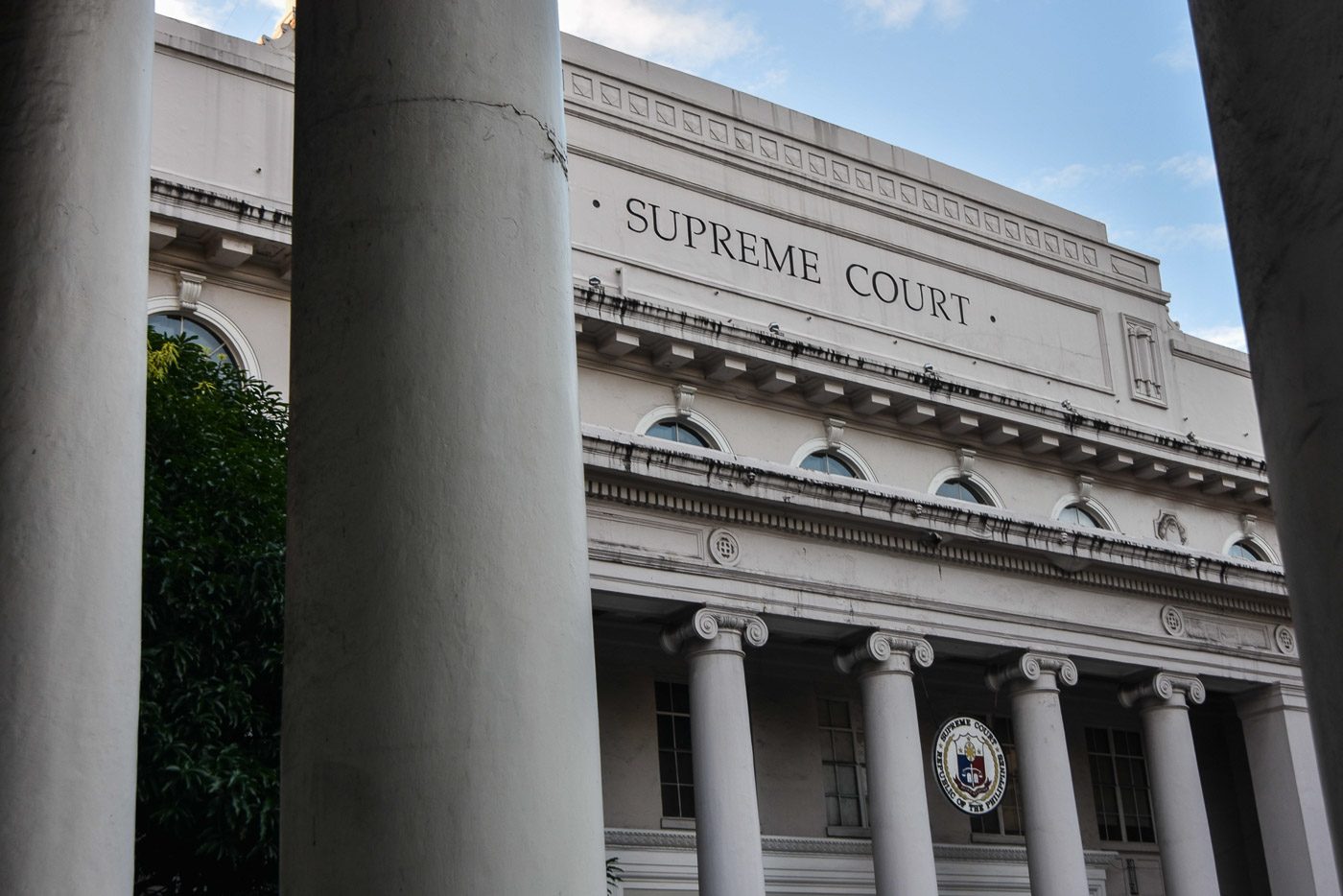 MANILA, Philippines – President Rodrigo Duterte has an overwhelming winning streak in the Supreme Court, with his top lawyer Solicitor General Jose Calida boasting of a “Win, Win, Win” campaign in his task to defend the administration.

As the Judicial and Bar Council (JBC) prepares for more gruelling rounds of screening and vetting for 3 vacancies in the Supreme Court, including the chief justice post, let’s track the votes of all justices in the Duterte presidency and who among them had handed the President his victories.

We list 6 major cases – 3 of them directly impacted on Duterte’s policies, while 3 of them involved cases of 3 government officials who were of interest to the President.

We also explain the nuances of the votes of some justices, some of whom are automatically nominated to become the Philippines’ next chief justice. This case set off Calida and Duterte’s winning streak in the High Court. Leading the respondents in this case was Defense Secretary Delfin Lorenzana who ordered the military to bury the late dictator at the Libingan ng Mga Bayani, compliant with Duterte’s verbal promise to the Marcoses.

The 9-5 decision care of a Peralta ponencia was the first in many decisions that upheld the potent power of presidential discretion. Among other reasons, the Supreme Court decision said that Duterte has the power to decide on the use of land within the public domain. Although 3 justices retired when the Supreme Court had to decide on motions for reconsideration, the vote became 10-5, because Duterte’s 3 new appointees – retired justices Samuel Martires and Noel Tijam and Associate Justice Andres Reyes Jr – all sided with the majority.

Acquittal of Gloria Macapagal-Arroyo for plunder

Duterte had no direct participation in this case, although 3 years later, Arroyo thanked the President for “providing the atmosphere in which the Court had the freedom to acquit me.” Former ombudsman Conchita Carpio Morales, herself a retired Supreme Court justice, slammed this decision as being “nipped in the bud.”

The vote was 11-4 courtesy of a Bersamin ponencia that introduced the main plunderer doctrine that has, so far, helped Jinggoy Estrada get bail in his plunder case, and aided the likes of Janet Lim Napoles in her own plunder cases. (READ: Courtesy of Supreme Court: Everyone in PCSO intel fund scam now cleared)

A nuance in one of the concurring votes was Bernabe’s. Justice Bernabe concurred with the result but dissented from the main plunderer doctrine. (READ: The unpredictability of Supreme Court Justice Bernabe) The final decision remained at 11-4 despite the retirement of some justices, because Martires and Tijam again sided with the majority. The arrest and continued detention of Leila de Lima

One of the close votes in the Supreme Court, the justices were split 9-6 in ruling that the arrest and detention of Senator Leila de Lima was valid. Carpio called this decision “one of the grossest injustices” in recent memory.

By this time, one more Duterte appointee had entered the Court – Associate Justice Alexander Gesmundo, who voted with the majority. Calida led the oral arguments in defense of the trial court judge who ordered the arrest.

The dissenters pointed out violations on the rules of evidence, with Leonen saying it “may be a case of persecution rather than prosecution.” The ponencia argued that specific evidence could just follow during trial. The ponente was Velasco, who is now Marinduque governor and whose son Lord Allan is expected to be the next House Speaker. The final voting mostly remained the same, except that Sereno could not vote because she was already on leave at this time due to her impeachment trial. 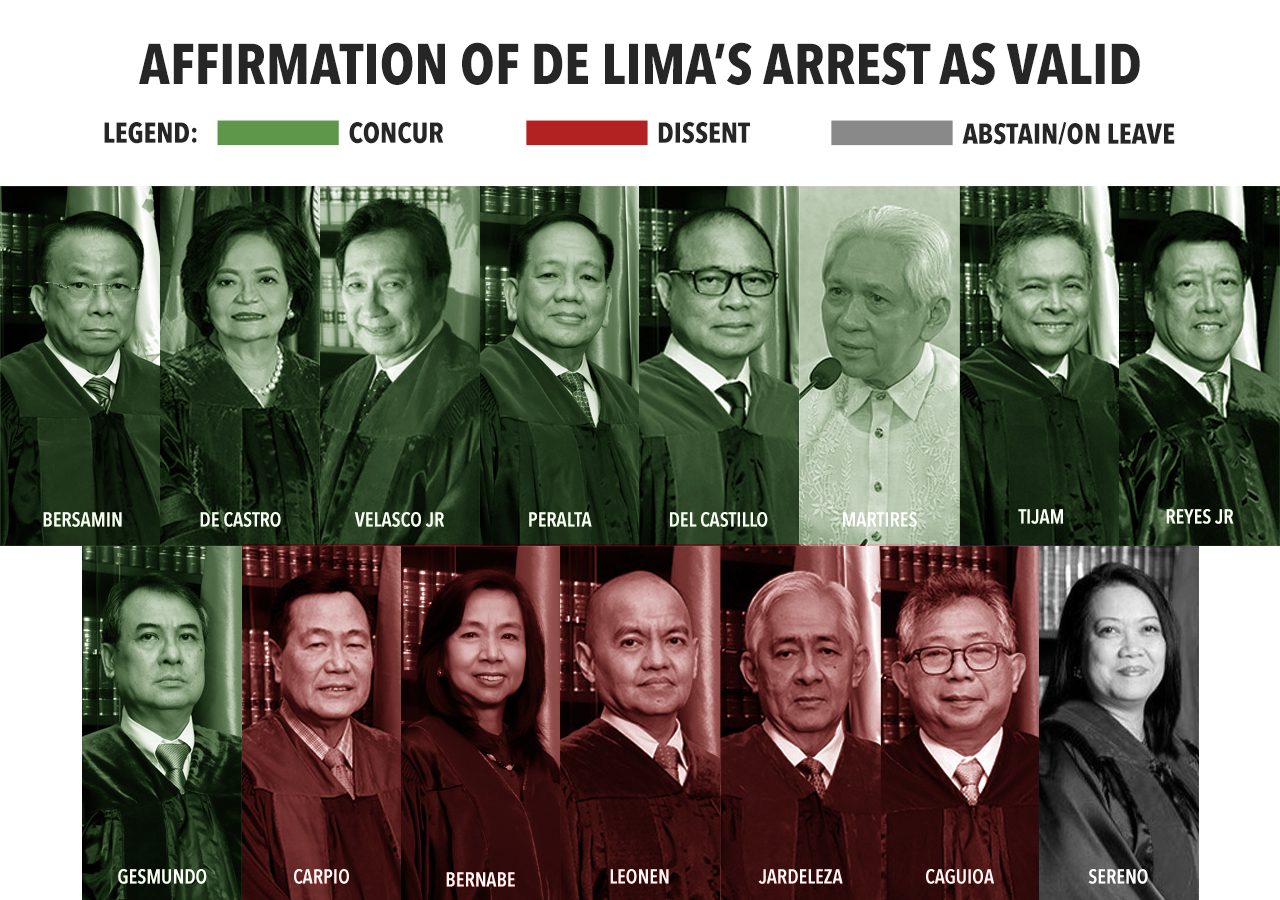 The constitutionality of Martial Law in Mindanao

The martial law decisions, all 4 of them, gave Duterte unbridled power of discretion.

It began with a Del Castillo ponencia that empowered Duterte to put the entire country under martial law.

Since 2017, the wins would be reinforced by new Duterte appointees. The 4th win was even written by junior justice Rosmari Carandang, who said in her ponencia that the Supreme Court “must not fall into or be tempted to substitute our own judgment to that of the People’s President and the People’s representatives.”

Associate Justice Francis Jardeleza, who initially concurred in the first decision, eventually joined the dissenters. In his last martial law dissent, Jardeleza called the Carandang ponencia “the Court’s deeming abdication of its duty.”

Bernabe’s concurring votes were again nuanced. She agreed with the result, but disagreed that the president’s discretion trumps all, including the Supreme Court’s. Bernabe said: “Our deference to the President must be circumscribed within the bounds of truth and reason.”

Take a look at the voting pattern in the 4 martial law wins: Leonen and Caguioa concurred because the issue had become moot, but dissented with the doctrine. Leonen, as joined by Caguioa, said that Congress must convene immediately after a president proclaims martial law “to jointly consider the reasons, scope, and proposed authorities to be exercised.” In a historic decision, the Supreme Court voted 8-6 to remove a chief justice in a mode other than the constitutionally-required impeachment.

A surprise dissenter in that vote was Velasco. But his dissent came with a nuance too. Velasco voted to dismiss the quo warranto petition, but agreed in a separate vote, that it was the proper remedy, except that it was premature. (READ: EXPLAINER: How SC majority tried to close all doors for ousted Sereno)

Other dissents had nuances too. Carpio, for example, was clear in his vote that quo warranto is an unconstitutional way to remove a chief justice. But in a separate voting on whether or not Sereno violated the Constitution and the law for failure to file Statements of Assets, Liabilities, and Net Worth, the vote became 9-0, with Carpio joining the majority and the other 5 not offering an opinion.

The voting did not change when the decision became final. Duterte’s closure of Boracay is constitutional

This is Duterte’s most recent win, which dissenters called the “realization of a tyrant.”

Penned by Del Castillo, the 11-2 decision declared that the closure was a valid exercise of police power. Only Leonen and Caguioa dissented.

“This ponencia, which prioritizes swiftness of action over the rule of law, leads to the realization of the very evil against which the Constitution had been crafted to guard against – tyranny, in its most dangerous form,” said Caguioa in his strongly-worded dissenting opinion.

Caguioa also had this to say of his colleagues’ decision: “To say that we believe in our Constitution, and yet discard it so easily because of expediency, is to champion hypocrisy to the detriment of our national soul.” – Rappler.com