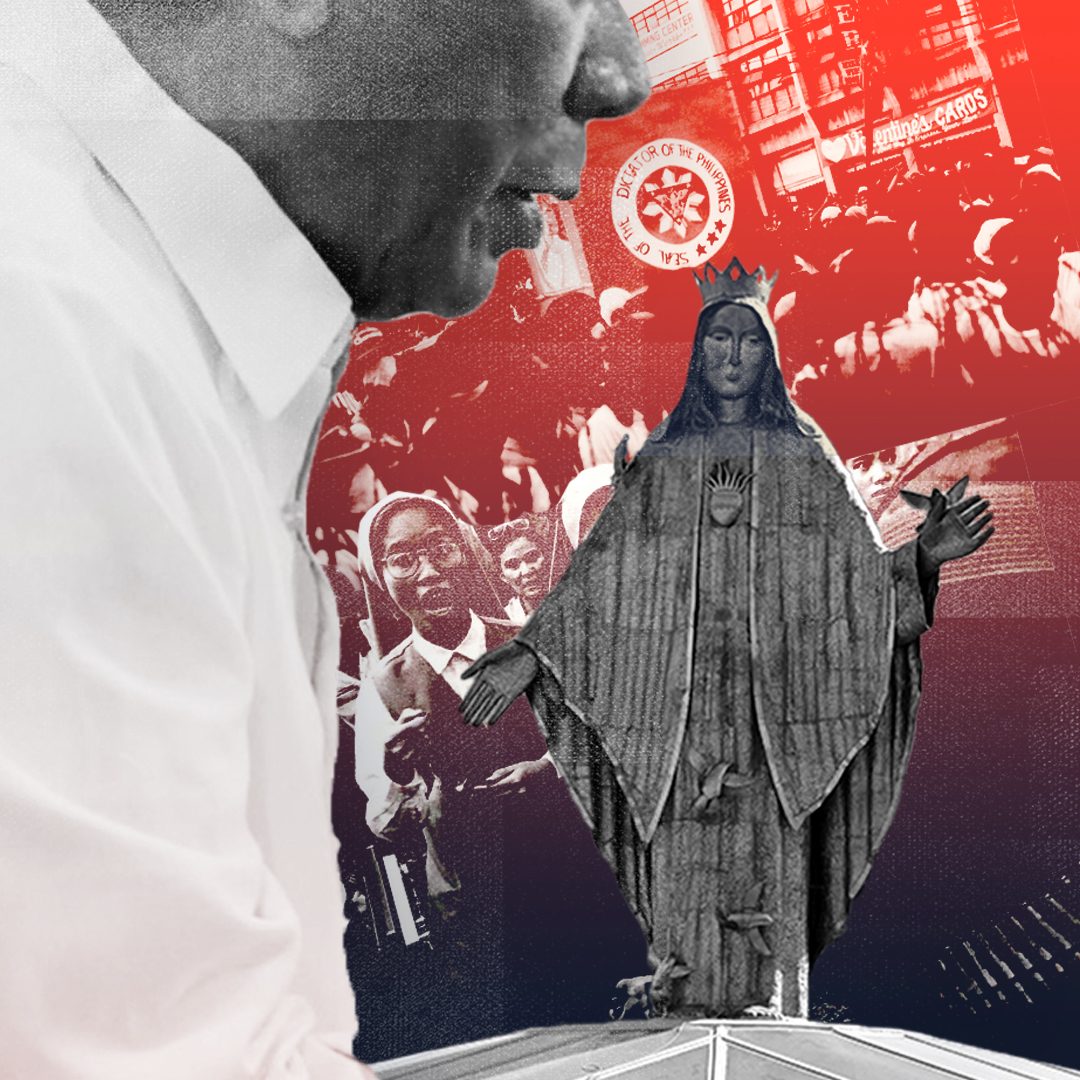 Facebook Twitter Copy URL
Copied
From creating a climate of fear to repudiating the Constitution, here are ways President Duterte has brought about a backslide in Philippine democracy

On February 25, 1986, Filipinos from all walks of life gathered on a road called EDSA to topple the decades-long rule of a dictator.

The massive rally came to be known as the EDSA People Power Revolution, regarded by many as a shining moment for Philippine democracy. Since then, the fragile democracy has been beset by crisis after crisis. Corruption and inequality persist administration after administration. But it was not until the Duterte presidency that a clear backslide in democratic freedoms was felt, not just by activists, but by average Filipinos.

Every time the anniversary of the Revolution nears, Malacañang releases a commemorative message from Duterte in which he hails the landmark event for its contribution to democracy. Last year, he called on Filipinos to “protect, defend, and preserve the liberties that we have won during that historic revolution.”

But is Duterte himself doing his utmost to safeguard democracy? Or has he done the opposite, as alleged by critics, academe, and political analysts and become the biggest threat to democratic freedoms since Ferdinand Marcos, the very dictator the EDSA Revolution unseated?

Even internationally, Duterte’s negative impact on democracy has been recognized. According to the Democracy Index 2017, Duterte has “led the way among Asian countries that are infringing democratic values.” It was also under Duterte that rule of law deteriorated significantly, according to the World Justice Project Rule of Law Index.

Here are ways Duterte has become a threat to Philippine democracy:

Duterte has publicly spoken of “kidnapping” and “torturing” personnel of the Commission on Audit (COA), an agency that monitors how the government spends public funds. He has ridiculed the Commission on Human Rights, an independent body tasked with investigating abuse committed by government forces. And when Supreme Court Chief Justice Maria Lourdes Sereno expressed concern that Duterte’s drug lists may have put judges on the list in danger, an outraged Duterte urged Congress to fast-track her impeachment and declared her his “enemy.” Sereno was eventually ousted by her fellow High Court justices, something observers say would not have happened if Duterte had not been hostile towards her.

The entities Duterte has attacked are a part of a checks-and-balances system critical to any democracy. This is meant to temper the enormous power wielded by the executive branch, helmed by the President.

Most politicians will lambast and attack their critics, especially those in opposing political parties. But Duterte’s crackdown on critics is on a whole new level of antagonism. He has dangerously lumped opposition figures with the Communist Party of the Philippines, which his government considers terrorists. He once publicized a list of “narcopoliticians,” politicians he claims, are involved in illegal drugs, right before the 2019 elections. Duterte said this was to protect the electorate from voting druglord coddlers in power but political analysts have also called it a move to threaten non-ally politicians.

Duterte has gone farther than other presidents (except for Marcos) to jail opposition figures. Senator Leila de Lima has been in detention for 4 years over allegations of profiting from the illegal drug trade in prisons, an accusation first made by Duterte when De Lima was leading investigations into his drug war. Duterte has also attempted to imprison former senator Antonio Trillanes IV, another outspoken critic, most known for accusing Duterte and his family of hidden wealth.

3. Has belittled the 1987 Constitution

Duterte is perhaps the only Philippine Chief Executive to dismiss provisions in the 1987 Constitution, the foundational law of the land that ensures the country is a democracy. He infamously derided the part of the charter that states government must ensure only Filipinos benefit from the marine wealth found in Philippine waters. In anticipating how he believed China would react if he were to enforce this part of the Constitution, he called the legal document “toilet paper.” Critics also say Duterte as good as repudiated the entire Constitution when he threatened to declare a “revolutionary government” supposedly to weed out corruption.

4. Weaponizes the law, subverts due process

Due process is a key tenet of a democracy because it ensures all legal rights of a person are respected even as the state enforces its laws on the people. But many critics and analysts have pointed out how Duterte is using laws to intimidate anyone who challenges him. For instance, lawyers said Duterte “reinvented the law” when he issued a proclamation in 2018 attempting to “void” Trillanes’ 2010 amnesty to put the lawmaker behind bars. Duterte signed an anti-terrorism law that gives the government more leeway to arrest critics deemed to “create a serious risk to public safety.”

Duterte and Solicitor General Jose Calida have used laws limiting foreign ownership to pin down Rappler after our critical reportage of his administration. The Court of Appeals had said the Securities and Exchange Commission fast-tracked its certification of revocation when it came to Rappler even if in other cases, it had given companies in a similar situation time to correct or modify objectionable portions of their articles of incorporation. And when critics said Duterte could be impeached for violating the Constitution, the President threatened to throw them in jail.

Rappler thanks community, partners at #InspireCourage

A free and independent press is essential to any democracy. Government officials may gripe about unfavorable news coverage, but for the most part, are able to live with, and work alongside, journalists. But Duterte has elevated government hostility toward the media.

He is the only post-Marcos President to ban an entire news outlet from Malacañang. His rants against influential broadcast network ABS-CBN led to the loss of its franchise, which has greatly limited its reach and also severely affected access to information in many remote parts of the country.

While his supporters say Duterte shows his respect for media work by never filing any libel suits, the President has nevertheless managed to create a climate of fear among journalists and the news industry. A 2019 survey found that a majority of Filipinos think it is risky to publicize criticism of the Duterte administration even if it is truthful. – Rappler.com