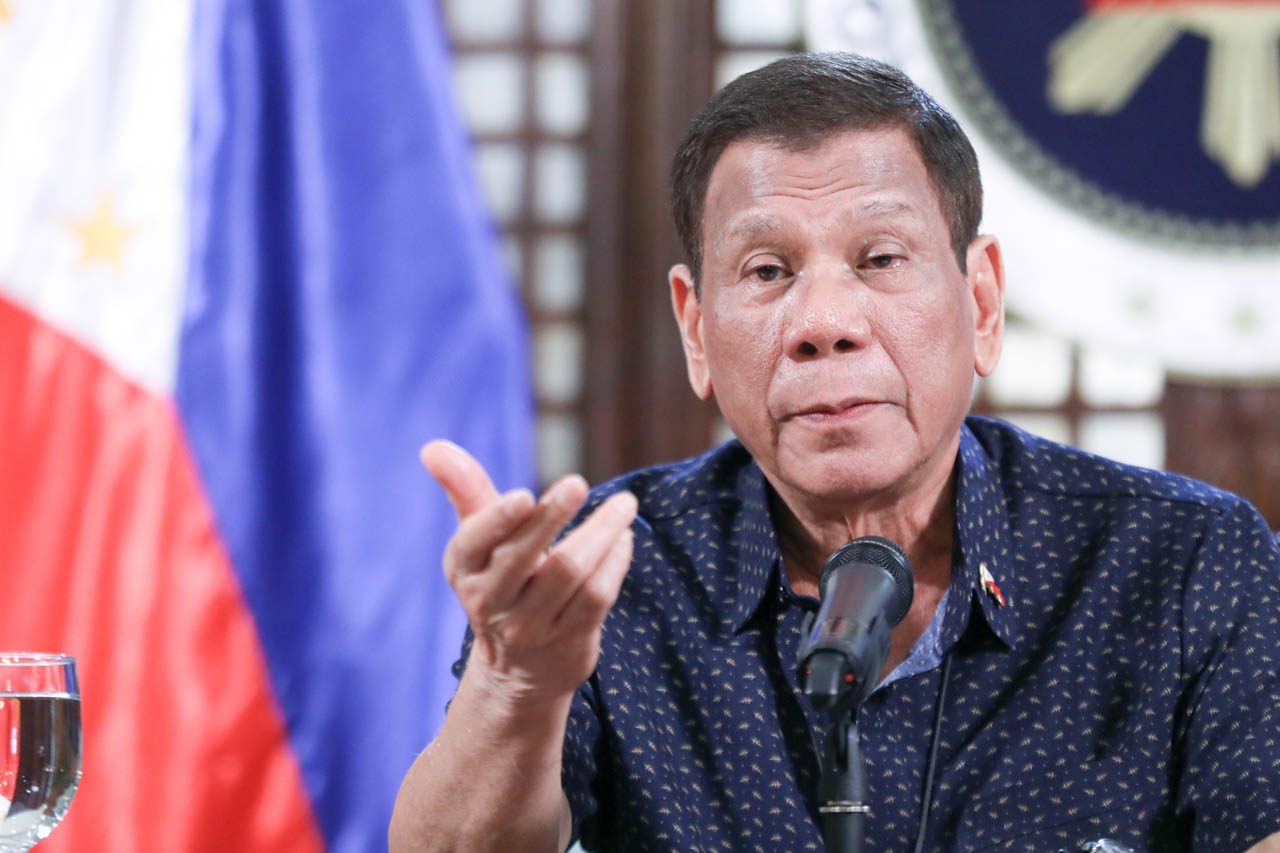 President Rodrigo Roa Duterte updates the nation on the government's efforts in addressing the coronavirus disease (COVID-19) at the Malago Clubhouse in Malacañang on April 6, 2020. ACE MORANDANTE/PRESIDENTIAL PHOTO

Facebook Twitter Copy URL
Copied
President Rodrigo Duterte has cursed the United Nations, called it useless, and even threatened violence against rapporteurs. He is set to address the UN General Assembly on September 23, Manila time.

The upcoming speech comes after years of blasting the UN – its attached bodies, officials, and experts – over their criticism of the violent anti-illegal drug campaign and other human rights abuses in the Philippines. Duterte is No. 12 on the list of speakers, according to the UN.

Duterte has cursed the UN, called it useless, and even threatened rapporteurs with violence. He also “joked” about withdrawing from the UN and establishing his own worldwide body. (READ: In a first, embattled Duterte to address UN General Assembly)

Before the world listens to Duterte, let’s take a stroll down memory lane and recall the President’s curses and tirades against the UN.

Then president-elect Rodrigo Duterte cursed the United Nations after his critics said he would be facing possible complaints there.

“Putang-ina kang UN. Eh hindi mo nga masolve-solve ang patayan diyan sa Middle East,” he said. (You son of a bitch, UN. You can’t even solve the killings there in the Middle East.)

Duterte also told the UN to keep quiet and declared: “[You] force on me your code of conduct. You’re not supposed to do that. I never signed anything which says that I have to behave in this manner or in that manner.”

Duterte hit the UN’s condemnation of extrajudicial killings in the Philippines. The UN Office on Drugs and Crime, in a statement, said it is important to use appropriate legal safeguards to hold drug traffickers to account.

The President said that the UN is “easily swayed and [is] coming on a very stupid proposition.”

“I would like also to just say, why would the United Nations be so easy to be swayed into interfering in the affairs of this Republic?” he said.

Duterte threatened to withdraw from the UN after being angered by criticism over killings under his drug war. He said “maybe we’ll just have to decide to separate from the United Nations.”

“Take us out, you have not done anything. When were you here the last time? Never. Except to criticize. Food for the world? There’s the world but there’s no food. World hunger organization, maybe. When have you done a good deed to my country?” the President said.

Duterte also said that the Philippines can establish its own international organization. But the UN should “return the money to use and we’ll go out.”

While he clarified that he was just joking about leaving the UN, Duterte did not mince words against special rapporteurs. He explained that they should have coursed their complaints through then secretary-general Ban Ki-moon.

“Napakabastos naman niya (That’s so rude). Do not do that because you are addressing me as president, and you’re pointing to the police structure,” he said, referring to UN Special Rapporteur Agnes Callamard. “This is a government, why would she directly – Gaga ba siya? (Is she crazy?)”

Duterte also said that given the chance, he would remind the UN of its failures.

(Let Ban Ki-moon write to me so I can tell him he hasn’t done anything. You can’t stop wars because until now peope are being massacred by the thousands and by the hundreds.)

Duterte said he does not care if critics will complain before the UN, he will continue his crusade against crime, terrorism, and illegal drugs.

(Go complain to the UN, I’ll even burn it down if you want. If I go to America, I’ll burn that devil.)

Duterte called out then-UN human rights chief Zeid Ra’ad Al Hussein for his criticism of the rising number of drug war killings in the Philippines.

“Sabi ko (I said), this guy is either a joker or medyo sira ang ulo (he’s slightly losing his mind),” he said.

The President also said that UN officials have no right to talk to him like that because they are “just employees of an office there or subsidy comes from the pocket of the member-states.”

“You idiot, you do not tell me what to do, I am your employer,” Duterte said, “You do not talk to me like that, you son of a bitch.”

Duterte hit UN special rapporteur Agnes Callamard after she said in a tweet that the death of Kian delos Santos should be the last in his drug war. 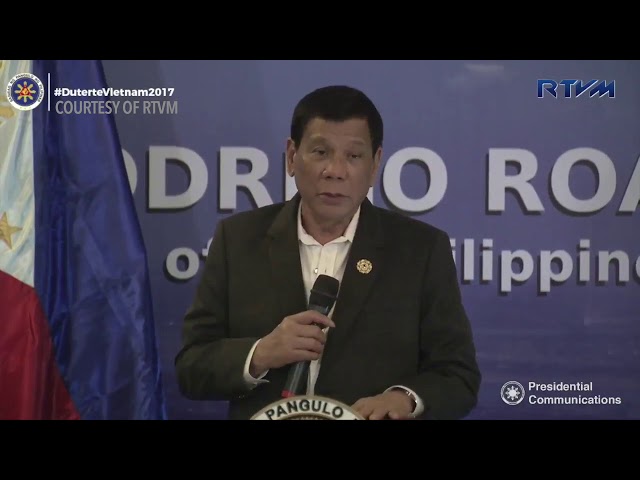 Duterte again threatened to slap Callamard if she starts an investigation into the killings in the bloody drug war.

Duterte said the UN has no purpose, and that he believes he and Aung San Suu Kyi are victims of human rights organizations.

The President was defending the Myanmar leader who is facing intense scrutiny over her state force’s treatment of Rohingya Muslims.

“Hey son of a whore, you commissioner, I need to go to a psychiatrist?” Duterte said.

“Look, you have a big head but it’s empty. There is no gray matter between your ears. It’s hollow. It’s empty. It cannot even sustain a nutrient for your hair to grow because his hair here is gone,” he added.

Duterte’s harsh words targeted another UN expert, but this time for saying that the rule of law in the Philippines is under attack.

UN Special Rapporteur on the independence of judges and lawyers Diego García-Sayá noted that there are threats to judicial independence in the country, in the aftermath of the ouster of then-Supreme Court chief justice Maria Lourdes Sereno.

Duterte said the UN expert “is not a special person, and I do not recognize his rapporteur title.”

“Tell him not to interfere with the affairs of my country, he can go to hell,” he said. “Thank you for listening to my outburst again… Putang-inang rapporteur na iyan. Pumunta iyan sa impiyerno (That son of a bitch, he can go to hell).“

Duterte reminded the Philippine National Police not to cooperate with UN experts in the conduct of investigations into the massive human rights violations in the country.

“Why would we be answering? Bakit, sino sila? (Why, who are they?) And who are you to interfere in the way I would run my country?” he added.

Duterte called out the UN for failing to prevent attacks against international seafarers, including Filipinos.

Speaking before a gathering of local government units, the President said he wans to tell the UN that it is useless since it has not taken any “punitive, strong action againt the pirates.”

“It has been an inutile body actually, but the United Nations has failed to establish order in this planet… It has not established order, it has not prevented wars,” he said. – Rappler.com