5 things to make PH a better place for scientists 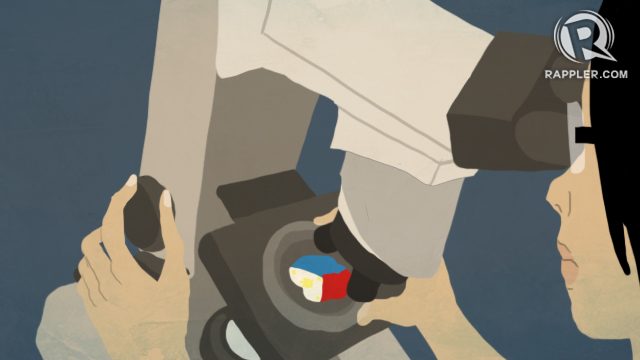 MANILA, Philippines – Filipino astrophysicist and data scientist Reina Reyes said that scientists are radioactive particles. If you put them together, you get “critical mass” and that’s when things start happening.

Sadly, however, there are not enough critical mass of Filipino scientists in the country right now. The United Nations Educational, Scientific and Cultural Organization (UNESCO) reported that at least in 2013, there are only 189 researchers per 1 million people in the country. UNESCO standard dictates that there should be at least 380 researchers per 1 million inhabitants in a country.

Researchers are defined by the global organization as “professionals engaged in the conception or creation of new knowledge,” and this includes research scientists and engineers that study and improve or develop concepts, theories, models, techniques, instrumentation, software or operational methods. Managers and administrators who also engage in the planning and management of a researcher’s work are also included in this category.

The Department of Science and Technology (DOST) indicated in its latest Human Resources in Science and Technology in the Philippines report that the country has a total of 721,000 science and technology (S&T) personnel in 2010. At face value, it surpasses the UNESCO standard. However, a closer look shows at the DOST data reveals a difference in the technical definition of “researchers” and “S&T personnel” as the DOST includes health professionals and teaching personnel in the count and does not distinguish which part of the S&T personnel population are, in fact, considered as researchers.

When Filipino researchers – scientists – themselves are asked about whether they think there are enough people working in the scientific community, they will always say, they need more researchers, collaborators, and mentors.

But their working condition in the country isn’t exactly the most encouraging situation for anyone who are practicing science or who would want to practice science. Yet, the Filipino scientific community remains hopeful that soon enough, things will get better and the scientific sector will thrive. Here’s a short “wishlist” from the Pinoy scientists themselves:

1. The procurement process should be reformed to give some leeway for technology transfer.

Tales of delayed releases from the Bureau of Customs (BoC) of important equipment, to being ping-ponged from one government agency to another to be able to access funds needed to buy office supplies, to the tedious paperwork for liquidation – many Filipino scientists are familiar with these.

A medical doctor and researcher would ask, “You entrust me with your or your grandmother’s life. How come you cannot entrust me a single sheet of paper?”

A physicist had to stall his team’s study because Customs refused to release the equipment his team had bought from a supplier abroad.

Another physicist said that he had to find a supplier eligible for public bidding who would buy materials from abroad, a middle person of sorts which would double or triple the price for the materials he could have bought himself if only the system allowed him to.

The current procurement system, under Republic Act 9184, was designed to minimize corruption by increasing transparency and accountability in government transactions. However, in doing so, massive inefficiencies happen which lead to underutilization, and eventually a lot of wasted resources.

2. Scientific culture should be promoted as early in the education system as possible.

Many Filipino scientists would happily share with you how did they become scientists and what made them think that scientific research could be a career. A curious kindergarten student asking a teacher about the origin of life has become a physicist. A young boy who grew up on the beach, building robots out of cans of sardines and discarded wood, has become an engineer. A farmer’s son has become a rice scientist.

These are stories filled with hope that if only we could, as a community, nurture the gifts and passion of the youth, they could be encouraged to pursue a career in research, rather than become intimidated by mathematics or complex scientific concepts they couldn’t memorize as their teachers instructed them to do so.

3. More funding should be devoted to the research and development.

The Philippines spends 0.14% of its gross domestic product on research and development, as of 2013 according to the World Bank. DOST records show that the amount is increasing every year, but the absolute value remains constant at less than 1%.

We’re lagging behind our ASEAN neighbors like Singapore, Vietnam, and Malaysia. While DOST recognizes the importance of investing in research and development to contribute to national progress, it is not reflected in our country’s investment portfolio.

4. There should be a “safe space” for any scientist to conduct science, be it in the basic, applied, or social sciences.

Within the scientific community, there’s an unspoken competition on whether which science is the most important. Does the curiosity-driven research have no place in contributing toward nation-building? Are the social sciences a “soft” and “low” type of science? In a sense, should there be less support for these types of sciences?

But studies are being carried out to either answer questions that would help us understand the world we’re living in through different lenses, or address immediate or upcoming issues and problems that we might be facing. One cannot simply dismiss one field for another.

A “safe space” where while the scientists are beholden to their responsibility to carry out studies, beat deadlines and submit deliverables and yet able to pursue or stumble upon solutions should be placed. Hopefully, this “safe space,” whether government-run or independently established would provide opportunities and support for those who would want to pursue curiosity-based research, and those who would like to market their products with the least friction, and most security.

5. Finally, there should be a system that would encourage more collaboration among the scientific community, across different institutions and fields of studies.

In the wildest dreams of the scientists is a go-to site where all previous and on-going research is known to all, avoiding duplication, and increasing the foundation of knowledge in the country. This dream includes open access to (at least) abstracts of studies and contact details of proponents. In this system, an inventory and audit of what needs to be studied and where the researchers need to look at will also be in place, making more comprehensive scientific data, which in turn could better address the problems in the country rather than produce incremental results.