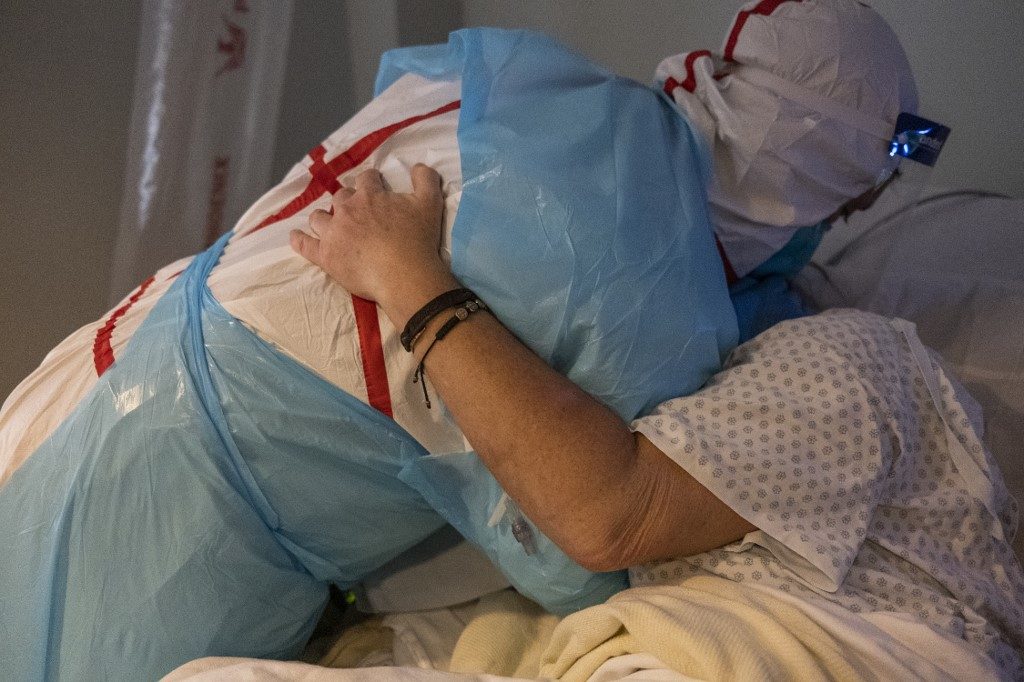 HOUSTON, TX - DECEMBER 07: (EDITORIAL USE ONLY) Medical staff member Gabriel Cervera Rodriguez hugs a patient, a co-worker of Rodriguez's who is suspected of being infected with the coronavirus in the COVID-19 intensive care unit (ICU) at the United Memorial Medical Center on December 7, 2020 in Houston, Texas. Texas has exceeded more than 1.35 million cases of Covid-19, with more than 23,200 deaths. Go Nakamura/Getty Images/AFP

Facebook Twitter Copy URL
Copied
When AFP accompanied Dr Joseph Varon, chief of staff at United Memorial in Houston, on his rounds, it was his 260th straight day of work 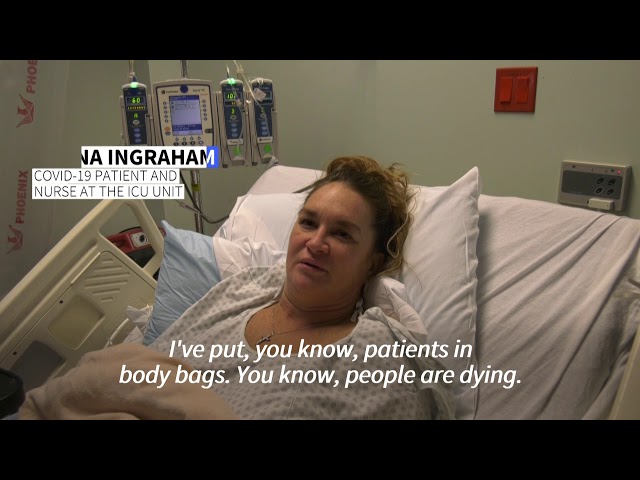 Through multiple masks, a face shield and a protective suit he likens to those worn by astronauts, Dr Joseph Varon bends over his COVID-19 patient and waves into the phone she is holding up.

At the other end of the video call, several loved ones express their delight at seeing the man who helped save Gloria Garcia from the disease that has killed more than 278,000 people in the US and counting.

Varon, the chief of staff at United Memorial, a small hospital that primarily treats minority patients in a low-income north Houston neighborhood, made headlines when a photo of him hugging an elderly COVID patient on Thanksgiving went viral.

The hug was a candid moment of empathy. And Varon’s wave to Garcia’s family is enthusiastic.

But make no mistake: the doctor is exhausted.

When AFP accompanied Varon on his rounds on Friday, it was his 260th straight day of work.

Even the few hours he steals at home each day are interrupted by endless phone calls. He sleeps, he says, no more than one or two hours a night.

Donuts play a role. He displays a box, adding: “Whatever they bring is what I will eat because you don’t know when you’re going to eat again.” He says he has gained 35 pounds (15 kilograms).

Outspoken and frustrated, Varon complained to the media as far back as July that he and his staff were running “on fumes.”

“My staff is very tired. My nurses, they will start crying in the middle of the day. They will break down because they are so overwhelmed with the number of cases we’re getting that they are truly exhausted,” he tells AFP.

Inside the critical care COVID ward, the beds are full. Staff take vitals and check on patients. Varon does his daily rounds.

Garcia, ahead of her video call, sits up in bed and carefully arranges her hair and makeup. Other patients lie back on their pillows, with get well cards taped to walls.

The health workers’ faces can barely be seen through the layers of protective gear. Some, including Varon, wear large photographs of themselves around their necks. It was the loneliness and lack of human contact on the ward that drove his pity for the man he hugged in the viral photo, he said.

During the summer, as cases across Texas surged, they were backed up by a specialist army team providing medical support.

But the military soon moved on. Varon and his staff kept working.

They have some reinforcements still: since the pandemic began, traveling nurses across America have rushed towards the danger even as others have hunkered down.

Demetra Ransom is one of them. She left her home in Florida to head first to New York, epicenter of the US outbreak in the spring, and then to other hotspots before landing in Houston.

At United Memorial she is tactile with the patients, touching their arms and shoulders to comfort them. She talks even to those who are non-responsive, she says, updating them on their condition in case they can hear.

It did not have to be this way, Varon believes.

He has expressed his frustration with the American failure to control the pandemic many times.

Texas Governor George Abbott, a Republican and ally of President Donald Trump, ordered a one-month lockdown in the state in April – but did not renew it.

The wearing of masks did not become compulsory in Texas until July, as cases surged and the state become one of the new US epicenters. Abbot says there will be no more lockdowns.

“People are out there in bars, restaurants, malls,” Varon told CNN when he was interviewed about the viral photo. “It is crazy. People don’t listen and then they end up in my ICU.”

If Americans would follow basic health and social distancing guidelines, “health care workers like me could hopefully rest,” he said.

He does not appear to dwell on sleep, however. He knows there are miles to go.

The next 6 to 12 weeks, over the Christmas period and into the new year, will likely be the “darkest weeks in modern American medical history,” he said in a recent interview with ABC.

Already cases in Texas are so high that Abbott has requested a military medical center be converted for intake of non-Covid patients to free up space in hospitals. County officials, meanwhile, have requested additional mobile morgues.

For now, in the main staging area which is separated from the ward’s rooms by barriers, United Memorial staffers shed some of their protective gear beneath a sign reading “COVID HUNTERS.”

Their gazes fixed, they pause and catch their breath. – Rappler.com