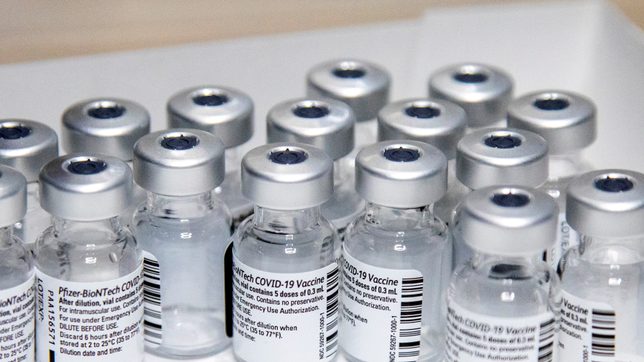 SAFE AND EFFECTIVE. Empty vials of the Pfizer-BioNTech COVID-19 vaccine are seen at The Michener Institute, in Toronto, Canada, on January 4, 2021.

Pfizer and BioNTech’s COVID-19 vaccine is safe, effective and produces robust antibody responses in 12 to 15-year olds, they said on Wednesday, March 31, paving the way for them to seek US and European approval in weeks to use the shot in this age group.

The read-out from a clinical trial, which puts the pair ahead of other Western vaccine developers in the quest to protect children, will likely allow for the use of the vaccine in that group before the next school year, Albert Bourla, Pfizer’s chief executive, said in a statement.

Whether COVID-19 vaccines work and are safe to use on children is one of the big questions drugmakers are trying to answer. Inoculating children and young people is considered a critical step towards reaching “herd immunity” and taming the pandemic, which has killed more than 2.9 million and infected 128.3 million.

Young people are less likely to have severe disease and more likely to have asymptomatic infection, allowing them to transmit the disease to others, said Dr Peter English, a retired consultant in communicable disease control.

The Pfizer and BioNTech vaccine is already authorized for use in people starting at age 16. The new study offers the first evidence of how the vaccine will also work in school-age adolescents.

The vaccine was well tolerated, with side effects in line with those seen among those aged 16 to 25 in the adult trial. The companies did not list the side effects for the younger group, but the adult trial’s side effects generally were mild to moderate and included injection-site pain, headaches, fever and fatigue.

The companies also studied a subset of teens to measure the level of virus-neutralizing antibodies a month after the second dose and found it was comparable to study participants aged 16 to 25 in the pivotal trial in adults.

Bourla said the company planned to seek emergency authorization from the US Food and Drug Administration (FDA) “in the coming weeks and … (from) other regulators around the world, with the hope of starting to vaccinate this age group before the start of the next school year.”

Shortly after the news, Israel, which is leading the world in its vaccination rollout, said it would start administering the shot to adolescents if the FDA gives it the green light.

Scientists welcomed the news, which has not been published in a medical journal or peer reviewed, but said more data was needed.

“It will be important to do this (vaccinate younger people to achieve herd immunity,” said English, who is also former chair of the British Medical Association’s Public Health Medicine Committee.

Last week, the companies gave the first vaccine doses in a series of trials testing the vaccine in younger children, that will eventually go to those as young as 6 months of age.

Rivals are also testing their shots on younger people.

A trial by Moderna Inc to test its COVID-19 vaccine in children aged six months to less than 12 years was launched this month, while Johnson & Johnson, which recently won approval for its vaccine in adults, has yet to begin a planned trial on children.

AstraZeneca in December removed children from a mid-to-late stage trial of its COVID-19 vaccine in Britain.

The British drugmaker’s vaccine has been linked this year with a very rare form of blood clotting in the brain, prompting some European countries to halt its use in younger adults even though the cause of the condition remains unclear.

Top US infectious disease expert Anthony Fauci in January raised the prospect of a US vaccination campaign for children by late spring or early summer. – Rappler.com