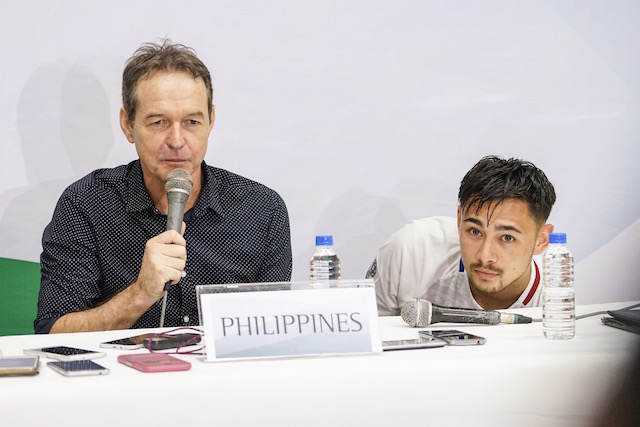 MANILA, Philippines – It was a historical night for Philippine football.

Amidst the celebrations, there were still questions left unanswered. Only time can tell, but a part of these include Azkals head coach Thomas Dooley’s contract, which expires after this big qualification to the Asian Cup.

The former US soccer team captain took the reins in 2014 and led the Azkals to the finals of the 2014 AFC Challenge Cup, where they fell to Palestine and missed the Asian Cup berth then. However, from then on, Dooley fueled the chaos within one of the best camps that Azkals ever had in 2014 and he ended up enduring the dying popularity of the sport.

Around two months after the 2014 Challenge Cup, Azkals standouts Filipino-German Stephan Schröck and Dennis Cagara admitted that their resignation from the national team was because of tensions with Dooley.

Ever since he came on board the Azkals’ team management, Dooley was known for experimentations in the roster – a totally different coaching style from former head coach Hans Michael Weiss.

As he survived the rifts with the team, Dooley’s contract was extended for another two years in 2016.

This gave him another opportunity to lead the Azkals in the 2016 AFF Suzuki Cup, where the Philippines co-hosted with Myanmar. To much dismay, the Azkals didn’t even make it out of the group stage, with Thailand and Indonesia advancing to the knockout phase.

During the pre-match press con against Tajikistan last March 26, Dooley repeated that the lackluster Suzuki Cup campaign was due to the low fitness levels of the players.

“The team we tested against North Korea, the team was a little bit better [than a] U-12 team in Italy. If you were in that kind of shape, you can’t win against an adult team. It’s not a physical game or the pressure,” said Dooley.

The turnaround for the Dooley-led team came in 2017 when the Azkals were taking another shot for Asian Cup. The Azkals managed to clinch that Asian Cup berth and never lost in their 2019 AFC Asian Cup Qualifiers run as they finished the tournament on top of Group F with 12 points off 3 wins and 3 draws.

With the Azkals qualifying for the Asian Cup under his leadership, it is a question whether the management would leave behind Dooley’s actions in the past or will the international coach extend his reign.

Azkals team manager Dan Palami said that the decision will still come in the future and his contract would be deliberated via a “holistic” approach.

“It would be unfair to judge him just based on this game. This is a big result for us, so [we] will take a holistic approach. It’s difficult to make commitments when you are really happy, so we have to approach that objectively and see where we want to go,” said Palami.

Palami also mentioned that he will be evaluating his own role in team, whether he will be staying with the senior team or moving to the grassroots level.

“After getting the team to the Asian Cup, I’ll have to look for another role [in] Philippine football kasi it’s been a long journey,” said Palami

(My kids are already complaining that I don’t have inheritance for them.)