Cavs, Timberwolves agree on a trade deal for Kevin Love

Aug 7, 2014 10:09 PM PHT
Naveen Ganglani
Facebook Twitter Copy URL
Copied
Kevin Love will join LeBron James and Kyrie Irving in Cleveland to form one of the NBA's most dynamic trios in the league 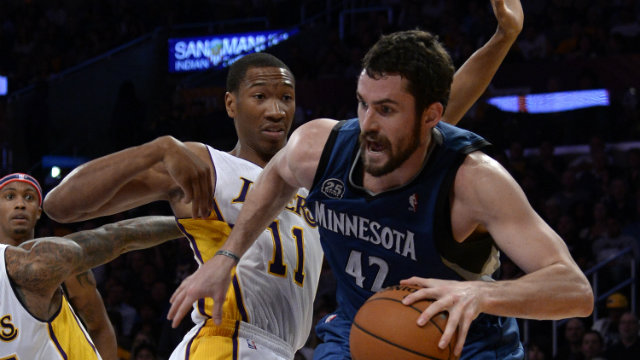 MANILA, Philippines – The Cleveland Cavaliers and Minnesota Timberwolves have agreed in principle to a deal centered around NBA All-Star Kevin Love, according to Yahoo! Sports’ Adrian Wojnarowski.

The deal cannot be made official until August 23 (August 24 PH time), when the 30-day no-trade clause in Wiggins’ rookie contract has come to an end.

In Cleveland, Love will join four-time NBA Most Valuable Player LeBron James and Kyrie Irving to form one of the most dynamic trios in the NBA today. Last season, Love averaged 26 PPG and 12.5 RPG, establishing himself as one of the best power forwards in the league today.

Minnesota, in turn, receives a rookie in Wiggins with a lot of promise and Bennett, who despite having a forgettable rookie campaign in 2013-2014, still has the potential to be a useful product in the NBA.

Wojnarowski also reports that the Timberwolves are not done shopping their players, as team GM Flip Saunders still has hopes of unloading the hefty contracts of J.J Barea, Alexey Shved, and Luc Mbah a Moute. – Rappler.com