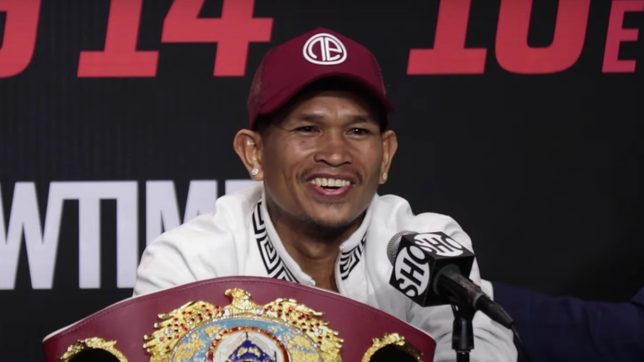 AND STILL. Johnriel Casimero defends his WBO bantamweight belt for the second time.

It has always been clear who World Boxing Organization bantamweight king Johnriel Casimero wants to fight.

“I always call Naoya Inoue but Naoya Inoue is scared of me like Donaire,” Casimero said in the post-fight press conference.

“If he signs a contract, let’s do it, I’ll fight. Naoya Inoue and Donaire, all scared. I don’t know what happened.”

Casimero seeks to put on a show against either Inoue or Donaire after a lackluster bout against the evasive Rigondeaux, who refused to engage in a slugfest throughout.

In a fight that drew boos from the disappointed crowd because of the lack of action, Casimero and Rigondeaux threw only a combined total of 478 punches and landed 91.

Their 91 punches landed are an all-time low for a 12-rounder in 36 years of boxing monitoring by Compubox.

Casimero said there will be fireworks when he and Inoue, the World Boxing Association and International Boxing Federation titlist, tangle.

“Naoya Inoue, I know he has power, but me too. I’m very powerful. Naoya and me in a fight, that is a very perfect style,” Casimero said.

“Even in the house of Inoue, I’ll fight him. No problem.” Meanwhile, Casimero said he will have no problems beating his compatriot Donaire, the World Boxing Council champion.

Instead of Rigondeaux, Donaire was initially scheduled to face Casimero in an all-Filipino unification bout.

However, Donaire called off the fight following an online spat and disagreement over drug testing.

“We want Donaire, we signed for Donaire. If he wants to run and if he wants to talk about Inoue, then so be it. Casimero is the world champion.” – Rappler.com