ELBOW INJURY. Carlos Yulo shows strength in not letting an injury hinder him from his quest for world title defense.

World champion gymnast Carlos Yulo did not let anything hinder him from clinching multiple world medals, including a serious elbow injury.

Yulo, who won a vault gold and parallel bars silver in the 2021 Artistic Gymnastics World Championships, disclosed to reporters on Tuesday, October 26 that he injured his elbow in training two months ago.

But it also meant that the 4-foot-11 dynamo couldn’t have brought home an additional silver medal in the parallel bars because his entry was dependent on his injury situation.

(I was just supposed to join the floor exercise and vault events only, but we pushed for the p-bar, so I went to the doctor for acupuncture therapy in order for me to train again, even though it’s just in the p-bar. I was able to touch the apparatus of other events, but I’m not pushing it because it still hurts.) 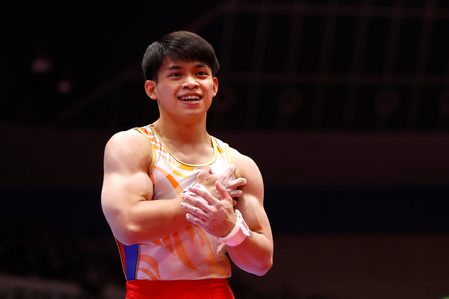 According to Yulo, he fell from the high bar and hurt his elbow, which he couldn’t straighten for three weeks. Though he did not break his bones, the doctor recommended for him to take it easy.

(They didn’t give a time for recovery, but the doctor said that I shouldn’t force it, but after our second visit, and we continued to go to the doctor weekly, he said that I can already train little by little.)

Yulo even impressed the competition by topping the parallel bar qualifying event with a score of 15.566, which was higher than the winning mark of China’s Hu Xuwei at 15.466 score in the final.

The Filipino was leading the race with a score of 15.300 before Hu, who was sixth to perform, overtook him.

Gymnastics action isn’t over yet for Yulo as he will be competing in one more meet in Japan before training for a packed 2022 schedule which will feature the Southeast Asian Games in Vietnam, Asian Games in Hangzhou, China and the World Gymnastics Championships in Liverpool. – Rappler.com