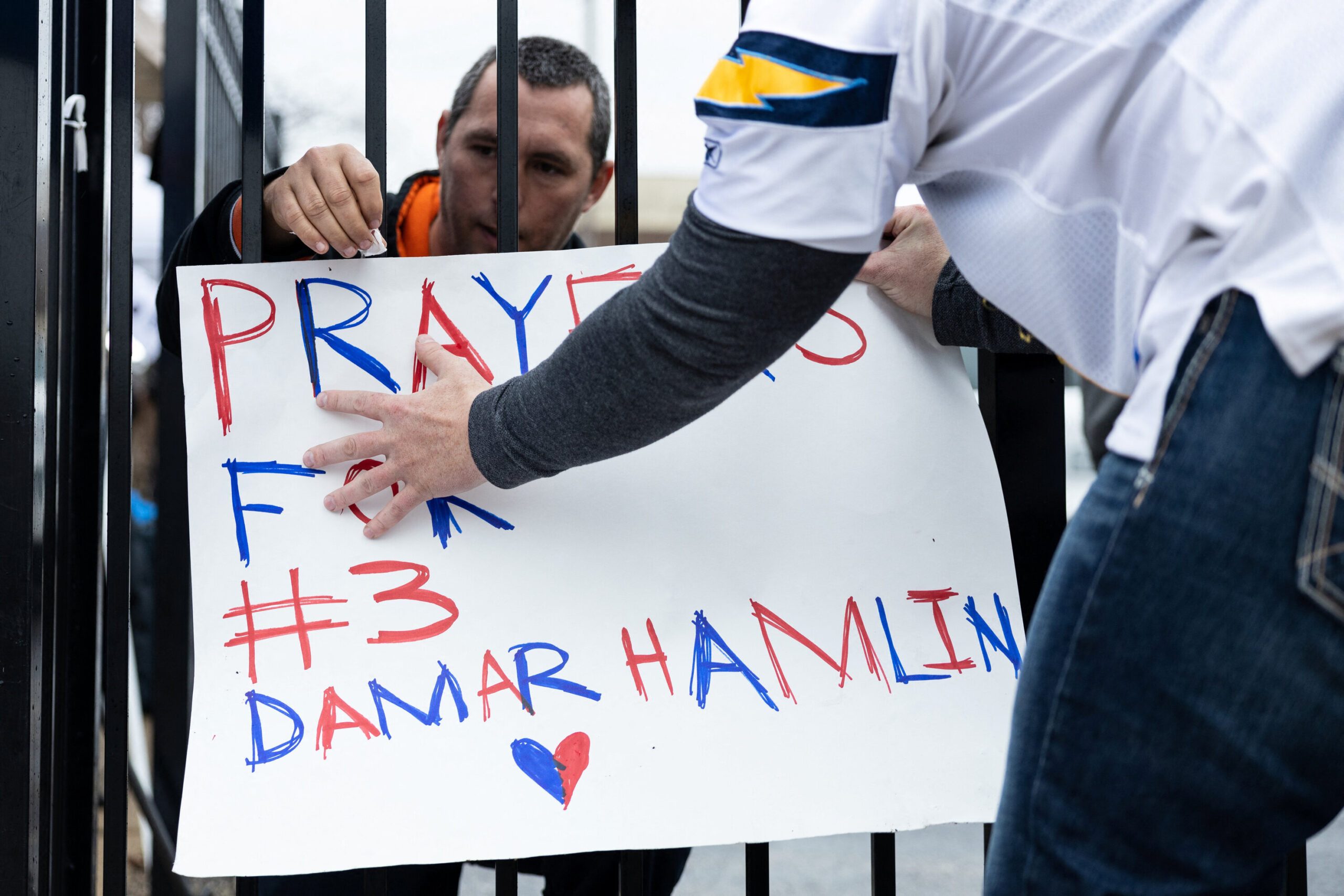 PRAYERS UP. Football fans tape a sign to a fence during a vigil outside the University of Cincinnati Medical Center where Buffalo Bills safety Damar Hamlin lies in critical condition.

Facebook Twitter Copy URL
Copied
Damar Hamlin, the 24-year-old NFL player who collapsed and suffered a cardiac arrest during a game, is ‘expected to remain under intensive care’

The Buffalo Bills said on Wednesday, January 4, that safety Damar Hamlin has shown “signs of improvement” since suffering a cardiac arrest during a Monday night NFL game in Cincinnati, but that he is still in critical condition.

“Damar remains in the ICU (intensive care unit) in critical condition with signs of improvement noted yesterday and overnight,” the Bills said in a social media post.

“He is expected to remain under intensive care as his healthcare team continues to monitor and treat him.”

During the first quarter of the Bills’ penultimate regular season game against the Bengals, Hamlin got to his feet after making a tackle and then collapsed.

After having his heartbeat restored on the field as stunned players from both teams cried, prayed and hugged, an ambulance took Hamlin to University of Cincinnati Medical Center.

Cincinnati quarterback Joe Burrow told reporters on Wednesday there was “a lot of chaos” after Hamlin was taken off the field, before the NFL announced the game was postponed.

“We didn’t really know what was going on,” Burrow told reporters on Wednesday. “Nobody wanted to continue to play the game in a situation like that.

“It was a scary, emotional night.”

US President Joe Biden, speaking to reporters in Hebron, Kentucky, said the 24-year-old Hamlin’s collapse was not a sign that the NFL has become too dangerous, while noting the inherent risk of a sport with violent collisions on nearly every play.

“I think working like hell on the helmets and the concussion protocols, that all makes a lot of sense. But… it is dangerous,” he said. “We’ve got to just acknowledge it.”

Back at the White House, Biden told reporters that he spoke to Hamlin’s mother and father “at length” but did not offer details about their conversation.

The Bills offered no further details on Hamlin’s condition, but his friend and business partner Jordon Rooney said in an ESPN report earlier on Wednesday that doctors saw promising readings overnight that they had hoped to see by Wednesday morning.

Rooney did not reply when asked by Reuters to provide details on Hamlin’s condition.

Earlier on Wednesday, the Bills held meetings and a walk-through – a slower-paced practice in which players typically do not wear pads and go through plays without physical contact – but did not provide any media availability.

The NFL, whose regular season concludes on Sunday, has said the Buffalo-Cincinnati game would not resume this week.

During a conference call with reporters on Wednesday, NFL executive vice president of Communications Jeff Miller said the conversation about what to do about the game has started and a decision will be made in the coming days.

The game, if played, would have playoff implications for both teams as they are battling with the Kansas City Chiefs for the top seed in the American Football Conference, which comes with a first-round playoff bye.

The Bills are scheduled to host the New England Patriots at 1 pm ET (1700 GMT) on Sunday. – Rappler.com