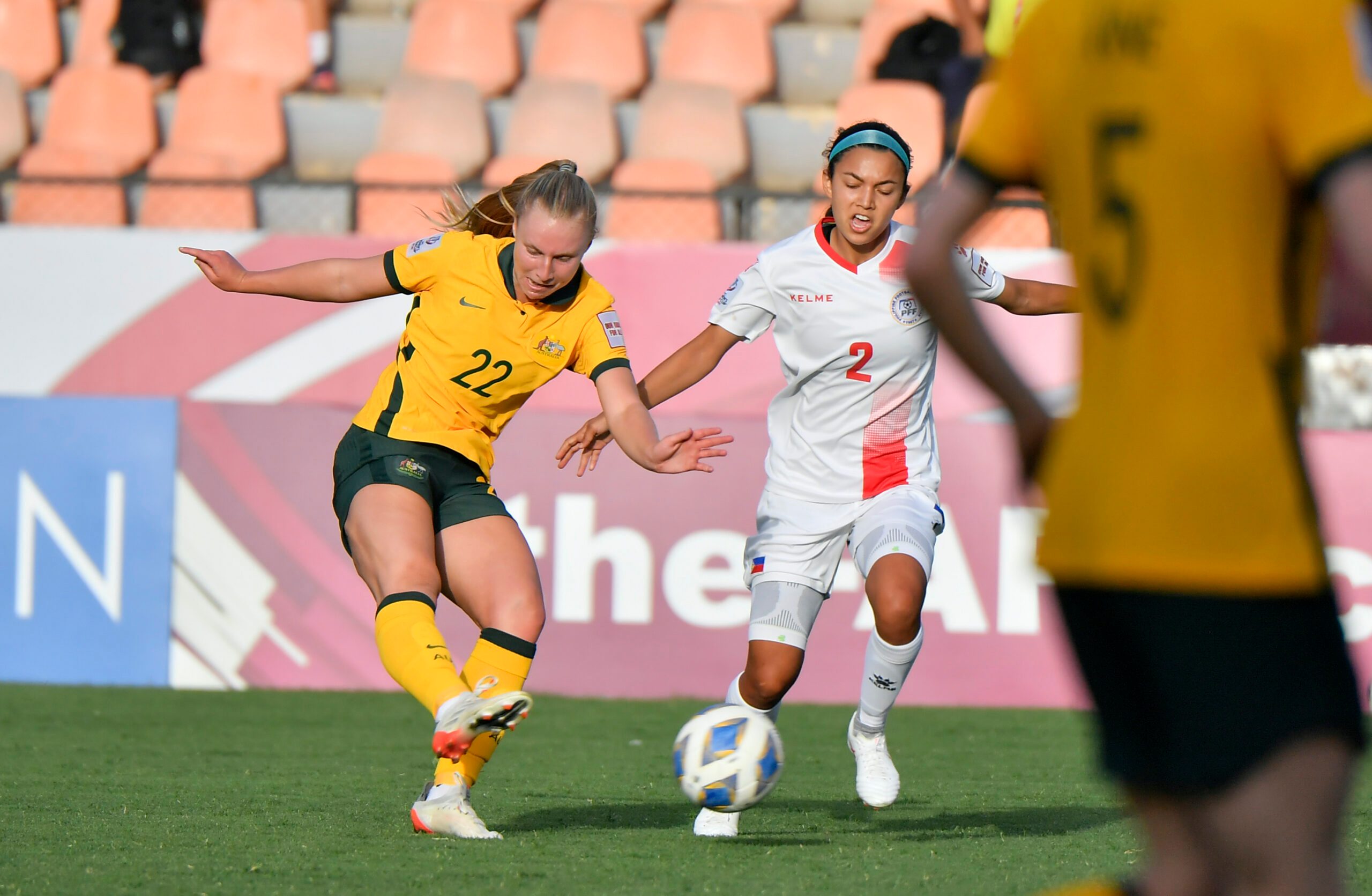 Facebook Twitter Copy URL
Copied
The Philippine women's football team keeps Australia scoreless in the first half, but the Matildas come out with guns blazing in the second half

MANILA, Philippines – The Philippine women’s football team absorbed its first loss in the AFC Women’s Asian Cup 2022 following a 0-4 thrashing from Australia on Monday, January 24, at the Mumbai Football Arena in India.

Sam Kerr notched Australia’s first goal at the 51st minute after beating two Filipinas in the air for a glancing header past the Philippines’ goalkeeper Kiara Fontanilla, setting up the Aussies’ scoring onslaught.

The Chelsea FC Women’s striker was involved in the second goal as she challenged Dominique Randle in the air for the ball, but the Filipina unfortunately scored an own goal just six minutes after Kerr drew first blood.

Emily Van-Egmond and 18-year-old Mary Fowler then tallied two more goals at the 67th and 88th minutes en route to the Australia rout.

The loss put a dent on the Filipinas’ slate as they slipped to 1-1 in Group B. They still have 3 points after two games, but their goal difference took a hit as it is now at -3.

Meanwhile, the Matildas continue to dominate the group as they now have 6 points and a +22 goal difference at first place. Their opening group stage victory came at the expense of world No. 94 Indonesia, 18-0, last January 21.

The latest triumph of Australia means it is now a step closer to securing the top seed in Group B. The Aussies will play their final group stage match versus world No. 38 Thailand on Thursday.

Australia bagged three goals inside the first 20 minutes in its last outing, but the Philippines made it a bit more challenging for the Matildas this time around. In fact, the best chance in the opening minutes came from a Filipina.

Chandler McDaniel received a brilliant through ball from Sarina Bolden and went straight inside the penalty box, but her shot – intended for the far post – curled too wide for a goal kick.

The Matildas remained active after McDaniel’s miss in the fifth minute and even had a penalty shot at the 17th mark as Caitlin Foord went down inside the box, but the referee just waved it off.

Foord’s penalty incident was sandwiched by an Alanna Kennedy’s missed attempt and a Long block off a Kerr shot as the aggressive Matildas pushed to break the deadlock.

Australia had three more golden chances before the half ended.

Kerr’s uncontested header off a left corner kick from Stephanie Catley went across the goal for a goal kick, while Clare Polkinghorne’s left-footed close range shot just went outside instead of the bottom left corner.

The third attempt also came from Kerr, and just like her header minutes earlier, it was off target as it flew above the crossbar.

Foord, who plays club football for Arsenal FC Women’s, was involved in a crucial play once again as she dribbled inside from the left wing to find a marauding Ellie Carpenter.

Carpenter found herself open for a few seconds before dribbling towards the goal and firing a powerful shot that went way above the crossbar to open the second half.

Tameka Yallop and Kennedy almost got themselves on the scoresheet, but the former’s volley hit the crossbar, while the latter’s header was saved wonderfully by Fontanilla.

The Philippine women’s football team will close out its group stage campaign against Indonesia at 10 pm on Thursday, January 27, at the Shri Shiv Chhatrapati Sports Complex in Pune, India. – Rappler.com