Tahnai Annis: A leader on the pitch, an LGBTQ+ advocate off it Facebook Twitter Copy URL
Copied
‘As a kid and as a teenager, I tried so hard to fit in, but I knew I was different and I struggled with self-acceptance and carried around a lot of shame,’ shares Philippine women’s football team captain Tahnai Annis, an ambassador of an LGBTQ+ athletic advocacy group

MANILA, Philippines – The first time Tahnai Annis donned the uniform of the Philippine women’s football team in the 2018 AFC Women’s Asian Cup, she was named captain of the squad. She was again appointed skipper of the national team which made history in the 2022 AFC Women’s Asian Cup by qualifying for the 2023 FIFA Women’s World Cup.

Taking on a leadership role is an enormous responsibility that seems to fit Annis to a T, even though she may not appear to be the typical leader who is animated on the pitch.

“I am not the loudest person on the field. I try to lead by example. I am not like Sarina (Bolden) who plays really well the role of a motivator, the vocal leader. That is not my personality,” she told Rappler in an exclusive interview.

“I will not tell my teammates to do something I am not already doing. I am a lot more reserved and observant, so I notice a lot of things that are happening. I can read people pretty well and I try to keep everything as cohesive as possible so nobody feels left behind.”

Annis speaks with a self-assured calmness that springs forth responses that are well-thought of and purposeful. Perhaps it is this air of quiet confidence, earned from almost a lifetime of playing the beautiful game, that has gained her the trust of her teammates and coaches.

She was eight years old when her father, Russell Annis, introduced her to the sport which initiated her transition to football from gymnastics. From the opening whistle, Annis was hooked and she began conjuring lofty goals which to an outsider back then probably sounded nothing more than the musings of an innocent, meandering mind.

Right about the time Annis entered high school, her father pushed her to get into the Olympic development program where she had the opportunity to join the state and regional teams and travel to places like France and Brazil to play football.

Annis was a US NCAA Division I All-American when she played for the University of Florida Gators from 2008 to 2011. She is one of only a handful of football players from the Philippines to have seen action at the highest level of professional football in Europe.

After her collegiate stint, she signed up to play for Þór/KA, a ballclub based in Akureyri which is one of the 10 teams in the Úrvalsdeild kvenna, the premier division of the women’s league in Iceland and one of the top eight leagues of Union of European Football Associations (UEFA). In 2012, Annis and Þór/KA finished first in the Úrvalsdeild kvenna to clinch the club’s first ever Icelandic championship.

Having played collegiate, professional, and international football, Annis has learned what it entails to excel in the different levels of competition of the sport. It is from this well of rich experiences that Annis is able to draw upon the wisdom to serve as one of the stabilizing forces in the national team.

When the stakes go higher, she maintains her composure and remains focused on the task at hand. This ability to center herself has enabled her to be clutch at the most crucial moments – the game-tying goal at the 89th minute against Nepal in the 2021 AFC Women’s Asian Cup qualifiers in Uzbekistan, and the two long-range screamers against Indonesia in the 2022 AFC Women’s Asian Cup.

Over two decades since she learned to play the game, she would find herself a step away from the fulfillment of her dream when she scored a penalty to help the Philippines defeat Chinese Taipei for a berth in the World Cup.

But more than the individual heroics, Annis’ value to the national team goes beyond scoring goals.

“Hali (Long, the national team co-captain) and I make sure everyone feels belonging in the group. We do not make the distinction between veterans and youngsters in the team,” she said.

“I think what is special about the team is that we make everyone feel we got each other’s backs. So even the younger ones were ready because they knew they were supported.” 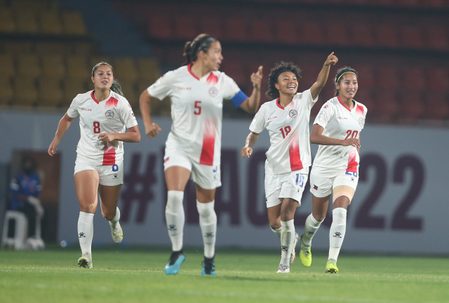 One gets a sense that who she is when she wears the captain’s band of the Philippine team is an extension of the Tahnai Annis outside of the playing field.

This is because being inclusive and extending support to people in need of a community and who just want to have their rightful place in the world are at the core of who Annis is. Who she is is more than just a football player, even though she still grapples to make that distinction.

“I find a lot of my identity through the game,” said Annis. “But I think over the past two or three years, I have tried to get a separation there and see what my life would be like outside of football.”

“I am trying to branch out and do things I am passionate about. What I am passionate about is helping people,” she said. “Before I started training for the qualifiers, my partner and I went to Costa Rica and did volunteer work for three to four months. At some point down the road, I see myself doing advocacy work and being more involved in the LGBTQ community.”

Annis currently is an ambassador of Athletes Ally, a non-profit LGBTQ+ athletic advocacy group in the United States that is engaged in making athletic communities more inclusive and less discriminatory and helping athletes to advocate for LGBTQ+ equality.

This motivation to help others again stems from her own experiences that have not all been pleasant, giving her an empirical anchor to open herself up to others who may need her listening ear, her helping hand, or her caring heart.

“As a kid and as a teenager, I tried so hard to fit in, but I knew I was different and I struggled with self-acceptance and carried around a lot of shame,” Annis shared.

“That extended even through my adult years. I did not even come out to my parents and most of my family until I was 25.”

“I wore a lot of hats to be who I needed to be because I felt I could not be my authentic self,” she shared. “If I can help people going through the same situation work through that to where they could love themselves and help them know they are worthy of the same love and acceptance as everyone else, I think that would be the goal for me.”

With her track record of accomplishing dreams she has set for herself, Annis looks poised to score more goals both in football and off the pitch.  – Rappler.com