ALL OUT. Philippine football team standouts (from left) Chandler Blue McDaniel, Hali Long, Sarina Bolden, and Quinley Quezada leave it all on the field. 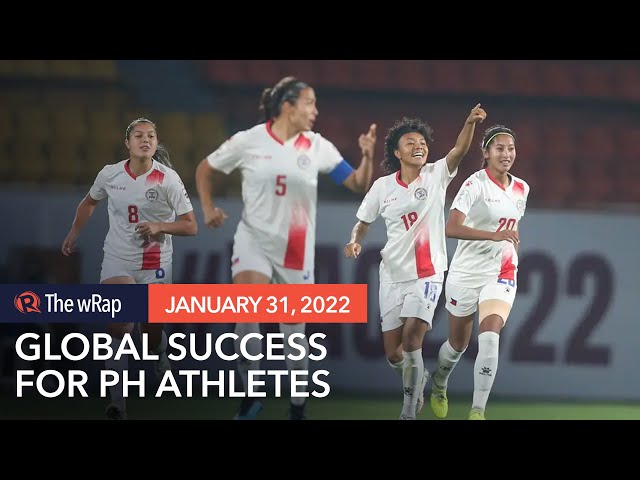 MANILA, Philippines – The Philippine women’s football team made history as it clinched the country’s first FIFA World Cup berth after outlasting Chinese Taipei on penalties, 4-3, following a 1-1 draw in the quarterfinal stage of the AFC Women’s Asian Cup 2022 on Sunday, January 30, at the Shree Shiv Chhatrapati Sports Complex in Pune, India.

Sarina Bolden scored the winning goal for the Philippines in the penalty shoot-out after a couple of gutsy saves by goalkeeper Olivia McDaniel.

The dramatic feat secured the Philippines a spot in football’s most prestigious world tournament for the first time ever.

On top of securing a seat in the World Cup – which is set in Australia and New Zealand in 2023 – the Philippines advanced to the final four of the continental tournament along with Korea, Japan, and China.

Quinley Quezada scored at the 49’ mark to give the Philippines a 1-0 lead, but Zhuo Li-Ping found an 83rd minute equalizer to send the match to extra time.

The 30-minute extra time, though, still wasn’t enough as both teams found it difficult to crack the 1-1 deadlock, sending the match to an intense penalty shoot-out.

Chen Ying-Hui scored next for the Taiwanese, but the Philippines’ Jessica Miclat missed to give Taipei a 3-2 advantage.

Relief came for the Filipinas when Hsu Yi-Yun missed for Chinese Taipei. The score, though, remained the same in the next two attempts as Filipina Hali Long and Taiwanese Su Sin-Hsin also went off the mark.

Luckily for the Philippines, McDaniel stepped up next and tied it at 3-3.

The Philippines then found a golden opportunity to finish off the match after Zhuo, who found the late equalizer to send the quarterfinal tie to extra time and penalty shoot-out, missed her attempt for the Taiwanese.

Bolden, who has been active the entire match, finally ended the nervy shoot-out as she drilled her penalty kick past Chinese Taipei goalkeeper Cheng Ssu-Yu.

The Philippines, mentored by Australian Alen Stajcic, will take on Korea next for a spot in the Asian Cup final on Thursday, February 3.

Korea pulled off a shocker a few hours before the Philippines-Taipei quarters clash as it overcame world No. 11 Australia, 1-0, with So-Yun Ji scoring a late right-footed winner at the 87’ mark.

Despite lining up with a back five for Sunday’s match, the Philippines controlled the ball well and looked to go forward whenever the opportunity arose.

The Filipina booters’ aggressiveness saw them launch three attempts – one from Sofia Harrison and two from Bolden – inside the first 10 minutes of the match, but the efforts of both players yielded no goals.

Taipei had a shot on target a little over 7 minutes after Bolden’s header, but Su Yu-Hsuan’s right-footed shot just inside the penalty box was comfortably saved by McDaniel.

McDaniel was tested once again in the 22nd minute as the Philippines defense unsuccessfully cleared a cross that eventually fell to Chen Yen-Ping, but her on-target left-footed shot was read by the goalie.

Bolden and Quezada each had an attempt before the halftime whistle was blown by referee Thein Thein Aye, but their efforts just went wide as the first 45 minutes ended at 0-0.

It was an encouraging half for the Filipinas as they had 60.6% of the possession, won three corners, won 64.7% of their aerial duels, and had seven interceptions.

Four minutes into the second half, Quezada finally found the back of the net as she poked home the ball from close range.

The ball was cleared by the Taipei defense twice, but the looping second clearance was headed back in by Katrina Guillou and Quezada was the quickest to react as her right-footed tap-in went past Taipei keeper Cheng.

At the 78th minute, match day Taipei captain Hsiang-Huei fired in a left-footed shot near the penalty spot after a beautiful cut-back was created by her teammate, but the midfielder’s attempt went over the bar.

Taipei eventually netted an equalizer at the 83’ mark as Zhuo accurately put the ball in the top left corner of the goal to make it 1-1.

McDaniel initially touched the ball, but was unable to completely stop it from going in.

Both teams failed to score in the final minutes of the second half and entered extra time at 1-1.

Annis, a 72nd minute substitute, and Bolden opened the first half of extra time with an attempt each, but again, their efforts were futile as the deadlock remained and the match proceeded to a penalty shoot-out. – Rappler.com