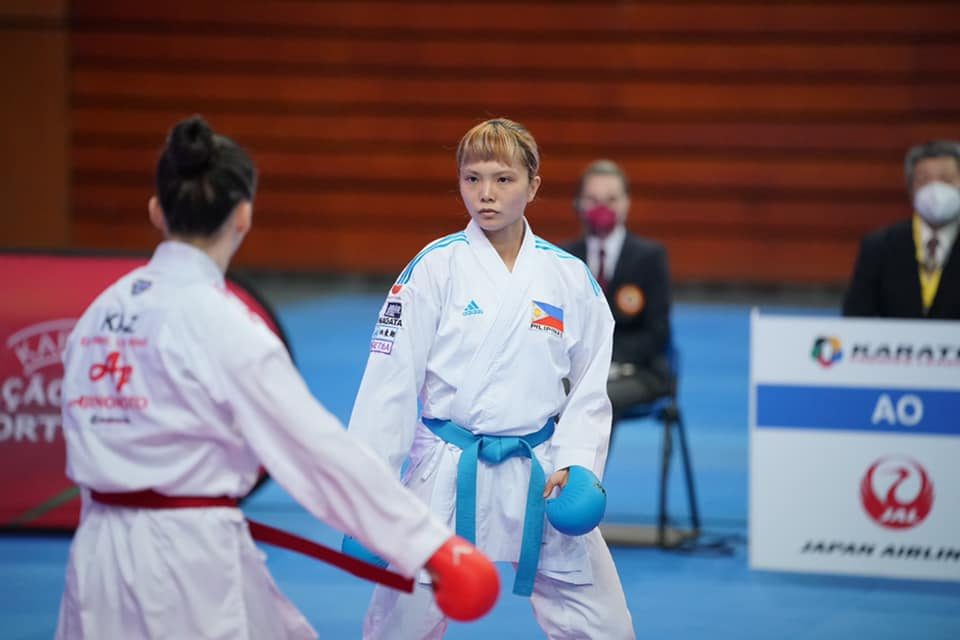 IN THE ZONE. Junna Tsukii says she’s confident heading into the world championships.

For the past three weeks, Junna Tsukii has been grinding it out in Arandelovac, a town located in the Šumadija District of central Serbia which is known for its springs of remedial sparkling mineral water.

It is here where she usually pitches camp when she gets ready for some of the toughest karate competitions in the world. In Arandelovac, a number of the top karatekas in the world regularly congregate to train together for high level tournaments.

She is now in the homestretch of her preparations for the 2021 World Karate Championships. Tsukii and fellow SEA Games gold medalist Jamie Lim will see action in kumite while Sarah Pangilinan and Joco Vasquez will be the Philippine representatives in kata in the event which gathers the world’s top karate practitioners on November 16 to 21 at the Hamdam Sports Complex in Dubai, United Arab Emirates.

“I just want to tell you that I am very confident going into the world championships,” Tsukii shared with Rappler.

She has reason to be upbeat. In a warm-up tournament this recent weekend in Serbia, she won first place in a field that included Tokyo Olympics gold medalist Ivet Goranova of Bulgaria and bronze medalist Bettina Plank of Austria.

Tsukii will most likely be facing Plank anew in the world championships as both of them compete in the women’s -50kg division. Goranova is in the -55kg division.

Just a few months back, Tsukii was desolate after she was booted out of the Olympic qualifiers in Paris via a highly disputable verdict. It marked a crushing end to her four-year journey to make it to the main draw of karate, which made its Olympic debut as a sport in Tokyo.

“I guess it was not my time. I rested for a month after the qualifiers,” said Tsukii. “I was in Japan during the Olympics. I watched Hidilyn (Diaz) and boxing on TV because I wanted to support our athletes. But the other events, I could not get myself to watch because it was too painful for me that I was not there competing.”

She admits it took her months to finally lay the disappointment to rest. Recovery for Tsukii meant building her stamina, strengthening her body, and fortifying her mental resolve. She immersed herself deeper in her training, but her faith in herself never wavered.

“When you are in the tatami, you are alone. You just have to believe in yourself. There are so many things in one’s mind that could make you doubt. You worry about injuries. You worry whether the judges will appreciate your technique. But you have to learn to block off any negative thought.”

Barely a month after missing out on a spot in Tokyo, Tsukii started trekking the road to redemption as she joined the Karate 1 Premier League in Cairo, Egypt on the first week of September. She defeated hometown bet Areeg Rashed in the finals to win another edition of the most important league event in karate.

Tsukii is hands down the best karateka the Philippines has ever produced. In the annual ranking of the Karate 1 Premier League for the period covering 2020 to 2021, Tsukii came out second in the standings, next only to Serap Ozcelik Arapoglu of Turkey.

In the latest rankings of the sport’s governing body, the World Karate Federation (WKF), Tsukii occupies the fifth spot.

Arapoglu remains the world No. 1, followed by second-ranked Miho Miyahara of Japan, No. 3 Shara Hubrich of Germany, and fourth-ranked Sara Bahmanyar of Iran.

Tsukii may have reached heights in the world rankings that no other Filipino has ever achieved, but she is far from satisfied.

“I want to carry the Philippine flag to the top of the rankings. There are instances when people see a big country’s flag, they would already think the player from that country is strong even if they do not know the karateka. If I could give people that same impression about Filipino karatekas, that would be good for our country.”

Although her sole focus right now is on the World Championships, Tsukii revealed she has already committed to participating in the Southeast Asian Games in Vietnam and the Asian Games in China, which are both scheduled next year.

She explained the importance of doing well in both regional competitions in the scheme of things.

“If we win more medals, we can bring more attention to our sport. That way, we can get more sponsors and fans to support karate so that we can build a good foundation for the next generation of Filipino karatekas,” she said.

“That has always been one of the main reasons why I chose to represent the Philippines. I want to help the next generation and I want to represent our country’s flag.” – Rappler.com