OUT. Conor McGregor will be sidelined for an indefinite period.

Facebook Twitter Copy URL
Copied
Given the enormous wealth Conor McGregor has already amassed and his recent run of poor results, the question is whether he still wants to return

The future of former UFC two-weight champion Conor McGregor is in doubt after a freak leg break in his trilogy bout with Dustin Poirier sees him headed for an extended period on the sidelines, with no guarantee that he will ever come back.

McGregor’s left leg was in a protective cast as he was wheeled out of the arena on a stretcher and brought to a local hospital, where UFC president Dana White said he would be operated on Sunday morning, July 11 (Monday, July 12, Manila time).

“It sucks, it’s brutal, it’s not the way you want to see fights end. Dustin Poirier will fight for the title and when Conor is healed and ready to go, you do the rematch, I guess,” White told a news conference. 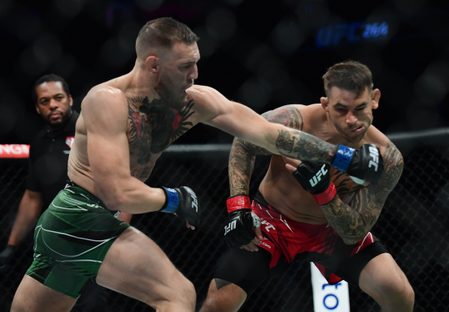 McGregor and Poirier fought at a frenetic pace during the first five-minute frame before doctors called a halt due to McGregor’s leg break.

Poirier, who was already the No. 1 contender for the lightweight title, will now meet Brazilian Charles Oliveira, who won the belt in May when he defeated Michael Chandler.

The UFC 264 lightweight matchup was supposed to bring what had become a bitter rivalry to an end, but White said the pair still had unfinished business in the cage.

“The fight didn’t get finished. You can’t have a fight finish that way. We’ll see how the whole thing plays out. I mean, who knows how long Conor is out? Poirier will do his thing until Conor is ready.”

Former United States president Donald Trump was among the 20,062 fans in a sold-out T-Mobile Arena that heard McGregor launch an expletive-ridden post-fight tirade at Poirier, insulting the American’s wife in the process.

“I don’t like that. That’s not good. Leave people’s families and wives and all that stuff out of it. Family has nothing to do with it,” White said.

Fights on the table

McGregor’s brash manner and highlight-reel knockouts saw him quickly rise to fame as a champion in two weight classes, but since adding the lightweight title in November 2016, he has struggled to fight consistently.

A boxing match with Floyd Mayweather in August 2017 saw his focus shift away from the octagon, and despite losing to the American he still netted around $140 million, he told Reuters in an interview later that year.

McGregor tried to maximize his leverage with the UFC, calling for a share in the company and announcing regular retirements to try to improve his bargaining position, but UFC president Dana White proved to be more than a match at the negotiating table.

He lost his lightweight title to Khabib Nurmagomedov in an ill-tempered bout in October 2018, but by then he was well on his way to becoming a tycoon, producing his own whiskey and a line of tailored suits.

Outside the gym, he had several brushes with the law during his periods of inactivity, and in November 2019 he pleaded guilty to assaulting a man in a pub in his native Dublin.

However, a return to mixed marital arts in a welterweight bout in January 2020 proved to be a roaring success as he knocked out Donald Cerrone, and McGregor said that he planned to have a season of fights during that year.

Those plans were disrupted by the COVID-19 pandemic, and though the UFC was quickly staging events again in the United States, it had no desire to put McGregor onto a card without a paying audience.

That left him on the shelf until January of this year, when he met Poirier for the second time in Abu Dhabi.

Simultaneously preparing for a proposed boxing match with Manny Pacquiao, McGregor’s boxing stance left him susceptible to leg kicks and Poirier eventually knocked him out in the second round.

White said there would be fights on the table for the MMA superstar when he is fit again and guaranteed that McGregor and Poirier will meet for a fourth time.

Given the enormous wealth McGregor has already amassed and his recent run of poor results, the question is whether or not he will want them. – Rappler.com