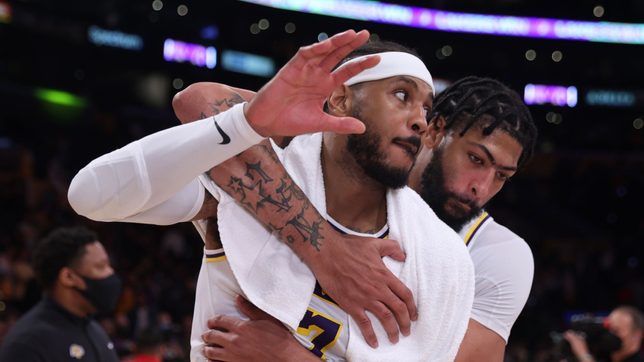 Carmelo Anthony scored 28 points off the bench to help lift the Los Angeles Lakers to a 121-118 win against the visiting Memphis Grizzlies on Sunday, October 24 (Monday, October 25, Manila time).

Anthony Davis had 22 points, 8 rebounds, and 4 blocks, LeBron James finished with 19 points, 6 rebounds, and 6 assists, and Russell Westbrook had 13 points and 13 assists for the Lakers, who avoided starting 0-3 for the second time in four years.

Ja Morant had 40 points and 10 assists, Desmond Bane scored 17 points, and Steven Adams contributed 14 points and 16 rebounds for the Grizzlies, who were trying to start 3-0.

Morant had a chance to tie the score with 1.9 seconds left after getting fouled on a desperation three-point attempt. He made the first two free throws, but missed the third.

Anthony grabbed the rebound and was fouled. He sank both free throws to seal the win. Anthony, who went 6-for-8 from three-point range, passed Moses Malone for ninth all-time in NBA scoring.

Anthony made a high-arcing three-pointer to give the Lakers a 97-94 lead with 9:03 left in the game. He was left alone on the next possession and made a wide-open triple to make it 100-94 with 8:22 remaining.

The Lakers had a chance to extend the lead back to double figures, but Monk missed a driving layup with 6:26 left and Melton capped a 5-0 run with a three-pointer to cut the lead back to 106-102 with 5:37 left.

Both teams held double-digit leads in the first half before the game stayed tight in the third quarter. The Grizzlies eventually took a 90-87 lead into the fourth.

The Lakers fell behind by 10 points five minutes into the game, but found their touch with help from Anthony, who replaced starting center DeAndre Jordan and scored the final five points in a 7-0 run to close the opening quarter and give the Lakers a 29-24 lead.

Anthony then sank a three-pointer on the first possession of the second quarter to extend the Lakers’ run to 10-0 and give them a 32-24 lead. – Rappler.com