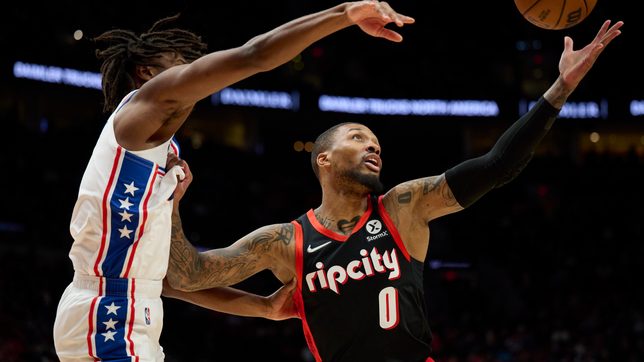 ON A ROLL. Damian Lillard and the Trail Blazers earn their third straight win.

Norman Powell scored 17 points, Jusuf Nurkic had 11 points and 11 rebounds, and Nassir Little added 11 points for the Blazers, who shot 50% from the field and won their eighth straight home game.

The short-handed Sixers shot 10 of 28 (35.7%) from three-point range and have lost six of seven following a six-game winning streak.

Playing the fourth of six straight road games, Philadelphia trailed 86-78 after scoring 14 of the final 18 points of the third quarter.

Harris scored to cut the deficit to 97-95 with 6:18 left in the game before the Blazers responded with 10 straight points.

Maxey converted a three-point play to pull the Sixers within 105-100 with 3:58 remaining, but Portland answered again and moved ahead 114-108 on Powell’s layup with 48 seconds left.

Lillard made 5 three-pointers and had 7 assists for the Blazers, who avenged a 113-110 loss to Philadelphia on November 1. He made all 14 of his free throw attempts, including 2 foul shots to seal the victory with nine seconds left.

Lillard and McCollum combined for 35 points in the first half for Portland, which moved ahead 82-64 after Anfernee Simons hit a three-pointer with 3:19 left in the third quarter to cap a 12-3 run.

Sixers guard Matisse Thybulle returned after missing seven games due to health and safety protocols and scored 9 points in 21 minutes off the bench. – Rappler.com