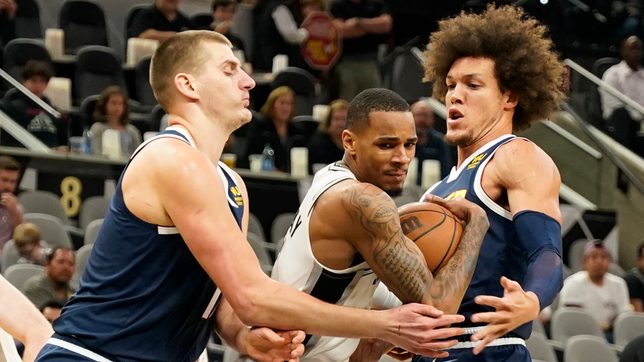 Derrick White poured in 23 points and Lonnie Walker IV added 21 off the bench as the San Antonio Spurs led throughout and rolled to a 123-111 win over the visiting Denver Nuggets on Thursday night, December 9 (Friday, December 10, Manila time).

The game was the second of a road back-to-back for the Nuggets, who won in overtime in New Orleans on Wednesday. Denver and the Spurs will play again on Saturday in San Antonio, which will conclude the Nuggets’ seven-game, 13-day road trip.

San Antonio led by 10 heading into the final quarter and never let the Nuggets get closer than five points while snapping a two-game losing streak.

Dejounte Murray added 20 points for the Spurs, with Doug McDermott hitting for 17 and Drew Eubanks scoring 14.

Reigning NBA MVP Nikola Jokic had 22 points, 13 rebounds, and 10 assists, recording his second consecutive triple-double and his fifth in 20 games for the Nuggets this season.

Aaron Gordon led all scorers with 25 points, Will Barton added 19, and Monte Morris and Facundo Campazzo hit for 13 and 12 for the Nuggets.

The Spurs led 37-29 after the first quarter as McDermott and White scored 7 points each. Barton led all scorers with 9 points in the period.

San Antonio stretched its advantage to as many as 18 points in mid-second quarter, the latest on White’s floater at the 5:28 mark. But the Nuggets responded, drawing to within 69-65 on eight consecutive points by Jokic before San Antonio finished off the half with a 5-0 run to go to halftime up 74-65.

Walker paced the Spurs with 14 points over the first two periods, with White tallying 13, McDermott adding 12 and Eubanks scoring 11.

Jokic led all scorers with 18 points in the half, while Barton had 14, and Gordon and Morris added 11 points each for Denver.

The Spurs pushed their lead back to 11 points early in the third quarter but Denver chipped away through the period. San Antonio had the final say, though, with Devin Vassell and Murray hitting back-to-back three-pointers to take a 100-90 lead to the final 12 minutes. – Rappler.com

Check out deals on your fave ballers’ footwear at Nike using these voucher codes!