Facebook Twitter Copy URL
Copied
Like Manu Ginobili, who won NBA titles with the Spurs mainly as a spark plug off the bench, Jordan Clarkson has fully embraced his role as a bench guy for the Jazz

Utah Jazz star Jordan Clarkson doubled down on his admiration for Manu Ginobili as he joined the San Antonio Spurs icon on the list of NBA Sixth Man of the Year winners.

“[H]e is one guy that I really watched growing up. He really made his role really cool to me,” Clarkson said about Ginobili.

Ginobili won four championship with the Spurs mainly as a spark plug off the bench, starting in only 402 of the 1,275 regular season and playoff games combined he played for the franchise.

In fact, the Argentine made the starting lineup in only 3 of the 91 regular season and playoff games combined he saw action in throughout the Spurs’ championship run during the 2013-2014 season.

Yet, Ginobili proved to be a potent part of the Spurs’ dynasty as he won the Sixth Man of the Year honors in 2008 and averaged at least 14 points, 3 rebounds, and 3 assists in 12 of his 16 NBA seasons.

Clarkson also thrived on an off-the-bench role as he averaged a career-high 18.4 points on top of 4 rebounds and 2.5 assists this season despite starting only once in their 68 games.

“Seeing what the team does, in those minutes, I really can get a feel of the game while I’m sitting down and watching,” Clarkson said. 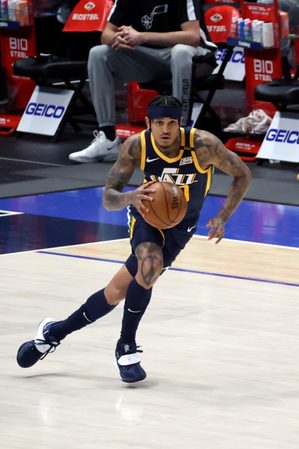 Clarkson, though, admitted he found it hard adjusting to being a bench guy early in his NBA career, particularly during his first couple of seasons with the Los Angeles Lakers.

“I think I was maybe 23 when [former Lakers head coach] Luke Walton got the job and told me I was going to come off the bench,” Clarkson said.

“I kind of took it like ‘Man, you do not think I’m not good enough so you’re playing me off the bench.’ I got to prove them wrong. I got to get back to the starting lineup.”

But after hearing sound advice from former teammates Lou Williams and JR Smith, who are also Sixth Man of the Year winners, Clarkson eventually embraced his new role.

“I just said, ‘This is who I’m going to be.’ I’m just going to come here and impact the game with the minutes that are given to me. I’m going to play my role and I’m going to do it well,” Clarkson said. – Rappler.com