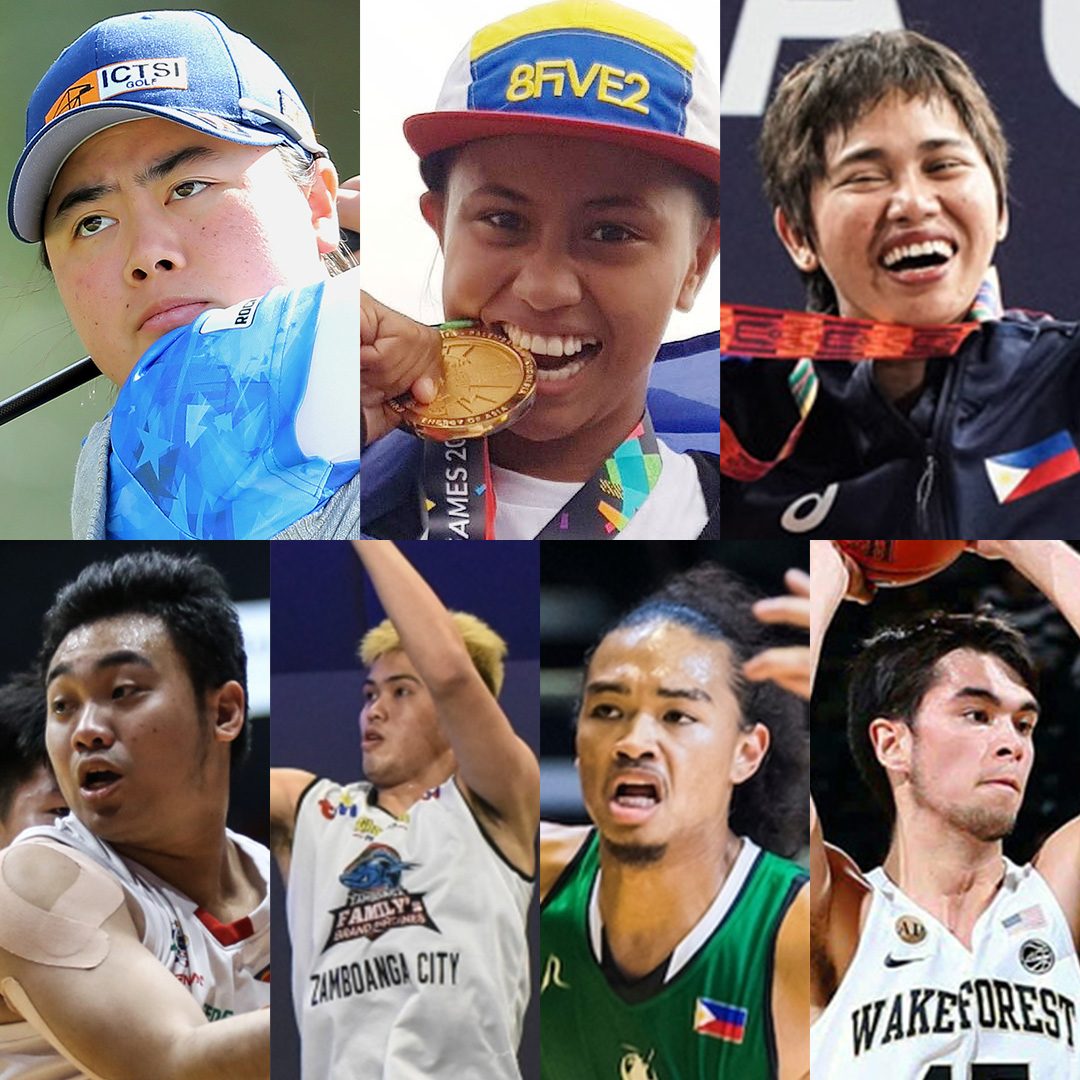 OLYMPIC PUSH. These Filipino athletes are aiming to see action in the delayed Tokyo Olympics.

Facebook Twitter Copy URL
Copied
After 2020 brought sports to a standstill, Filipino athletes try to revive their chances of making it to the Tokyo Olympics

As the COVID-19 pandemic terrorized the world of sports last year, athletes hope to finally make a grand comeback this year with the Tokyo Olympics scheduled to take place in July.

Before the entire world went into lockdown in March 2020, only pole vaulter EJ Obiena, world champion gymnast Carlos Yulo, and boxers Eumir Marcial and Irish Magno were able to nail berths to the quadrennial meet.

Despite the standstill 2020 brought, some Filipino athletes were able to shake up their chances of making it to the Tokyo Olympics.

Hidilyn Diaz, the 2016 Rio Olympics silver medalist, is just one qualifier away from officially solidifying her return to the quadrennial meet.

Before the pandemic, Diaz swept the 2020 Roma Weightlifting World Cup with 3 gold medals in the women’s 55kg event.

The event marked the Filipina weightlifting star’s fifth Olympic qualifier and she was set to participate in the 2020 Senior Weightlifting Championships in Kazakhstan in April to meet the required 6 qualifying tournaments.

Although the pandemic eventually canceled the world championships, Diaz had a fallback of traveling to Cali, Colombia instead for her last Olympic qualifier.

However, before the tournament announced its eventual cancellation, Asians and Europeans were banned from entering the country last March, leaving Diaz and her team stranded in Malaysia.

But since only one lifter can represent a country per event in the Olympics, Diaz will likely take the No. 2 spot.

Yuka Saso, the 2018 Asian Games double gold medalist, remains to be the country’s top bet for an Olympic berth in golf especially after an impressive pro debut in the Japan LPGA tour.

After bagging two titles in Japan, Saso starts the year in a comfortable No. 21 position in the Olympic rankings where the top 60 women will be able to see action in the global sports showpiece.

Though she yielded to Ayaka Furue in the Mercedes-Benz Player of the Year rankings, the 19-year-old golf sensation emerged on top of the money ranking with earnings amounting to ¥93,891,170.

Aside from Saso, LPGA rookie Bianca Pagdanganan is also in contention for a spot in the Olympics as she sits on the No. 41 spot.

Pagdanganan impressed in her rookie year when she cracked the top 10 of her first major tournament in the KPMG Women’s PGA Championship, leading to a 2020 US Women’s Open debut and a record leap in the world rankings.

The 23-year-old power player is currently the LPGA’s driving distance leader with an average of 283.071 yards.

In Olympic golf, only the top 15 players in the men’s and women’s divisions can earn outright slots in the Tokyo 2020 Games.

But the rest of the hopefuls can vie for the remaining slots in the 60-man field of each division by collecting tournament points and barging into the top 60 of the Olympic Golf Rankings (OGR).

The country’s Tokyo Olympics bid was not exempt from Aldin Ayo’s infamous saga in 2020.

The former UST Growling Tigers coach became the newly-appointed Manila Chooks mentor and was set to guide the country’s top-ranked 3×3 players Joshua Munzon (No. 1), Alvin Pasaol (No. 2), Troy Rike (No. 5), and Santi Santillan (No. 6) in FIBA tournaments.

But after dealing with the Bicol bubble controversy, which led to his indefinite ban in the UAAP, Ayo may need a do-over as Pasaol, Rike and Santillan opted to turn pro.

As the players have officially applied for the 2021 PBA Draft, their chances of participating in the delayed 3×3 Olympic qualifiers remain uncertain.

The Olympic qualifier, which was originally scheduled last March 2020, was delayed to May 26 to 31 in Graz, Austria.

As the top 8 teams (4 per gender) have qualified based on the FIBA 3×3 Federation Ranking last November 1, 2019, the Olympic qualifier in Graz will only award 6 additional tickets (3 in each gender) to the quadrennial meet.

If the Philippines fails to nail an Olympic berth in Graz, its final hope is to emerge as the winner of the FIBA 3×3 Universality Olympic Qualifying Tournament in Budapest, Hungary.

Margielyn Didal hopes that 2021 would be brighter than her whole year spent on lockdown in Cebu.

The country’s top skateboarder, the 2018 Asian Games gold medalist who has virtually qualified for the Tokyo 2020 Olympics, hopes to officially seal her spot by June 2021.

She currently ranks No. 14 in the women’s street Olympic rankings where only the top 16 skaters, excluding two host country spots and direct qualifiers, will advance to Tokyo.

Didal also has a chance to gain a direct qualification if she is able to place top 3 in the World Skate World Championship this year.

While World Skate scrapped all its events since March 2020, the 21-year-old Filipina was forced to train in the Philippines, building makeshift obstacles around her home in Cebu while also continuing her campaign to set up a skate park in her hometown. ([PODCAST] Targeting Tokyo: Margielyn Didal)

Asian boxing managed to make the most of 2020 as it luckily held the continental qualifiers before the pandemic that saw Eumir Marcial and Irish Magno gain spots in the Tokyo Games.

In the same tournament, though, women’s boxing world champion Nesthy Petecio was one win away from an Olympic berth before suffering a heartbreaking defeat.

This year, she hopes to finally reach her dream in the final Olympic qualifier in June 2021.

With a stable filled with Olympic hopefuls aside from Petecio, boxing was chosen to be one of the first teams to join the PSC training bubble starting Friday, January 15 at the National University (NU) Inspire Sports Academy.

The team that hauled in 7 golds in the country’s hosting of the 2019 Southeast Asian Games is also pinning its hopes on Carlo Paalam, James Palicte, Ian Clark Bautista and Riza Pasuit, who joined the Asian qualifiers last year.

The Association of Boxing Alliances in the Philippines (ABAP) is also planning to set up a training camp in Thailand for the Filipino boxers to ramp up their Olympic bid, as well as boost Magno’s Olympic debut.

Marcial, who recently debuted in the professional circuit under MP Promotions, continues to fulfill his promise of training for the Olympics in Los Angeles.

Philippines’ top cyclists Daniel Caluag and Ariana Dormitorio are also at striking distance from the finish line to the Tokyo Olympics.

Mountain biker Dormitorio currently ranks No. 4 in the Asian Olympic rankings and has virtually qualified since the top-ranked Japanese rider has secured a berth via the host country allocation.

US-based BMX rider Caluag, who participated in the dry run in Tokyo, is running for a return to the quadrennial meet as he ranks No. 5 in the Asian rankings.

Only the top 3 riders in Asia, excluding the Japanese, will be able to earn tickets to Tokyo based on the Olympic rankings to be released by UCI in May 2021.

Amid the pandemic, Philippine athletics continues its Olympic push by milking more opportunities to make it to the global sports showpiece.

Last year, the Philippine Amateur Track and Field Association (PATAFA) announced that the upcoming national open will serve as an Olympic qualifier.

Mary Joy Tabal, the 2016 Rio Olympian, is targeting a return to the quadrennial meet, while 2019 SEA Games marathon gold medalist Christine Hallasgo has also been focused on training to make the Olympic standard.