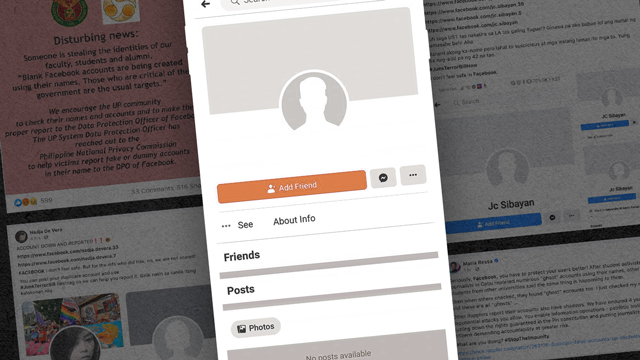 MANILA, Philippines – Did you find an empty Facebook profile bearing your name?

You are not alone. On Sunday, June 7, hundreds of Filipinos woke up discovering several accounts using the exact or a version of their name. (READ: Duplicate, false accounts of U.P. students reported to surface online)

This was initially pointed out by Tugani, a campus publication of the University of the Philippines (UP) Cebu on the wee hours of Sunday. They said that they discovered accounts named after the arrested activists during an anti-terrorism bill gathering on Friday, June 5.

In a statement, the UP System urged its community to look up their own names and accounts online and make the proper report to the Data Protection Officer of Facebook.

“Rest assured that the UP System Data Protection Officer has reached out to the Philippine National Privacy Commission to help students and alumni report fake or dummy accounts in their name to the DPO of Facebook,” UP System said.

It was, however, just the tip of the iceberg.

As the morning unfolded, other organizations pointed out that students, alumni and even faculty of other schools were also targets of the same online threat. As of Sunday afternoon, journalists, bloggers, and students from other university also reported having fake accounts under their name.

This latest discovery has pushed several users to demand better account protection from the giant social media platform.  On Facebook, affected users harnessed their own online community to report and flag these suspicious accounts.

Based on these online reports, most of the suspicious accounts follow a common pattern in the links: First name-period-last name-generic number. The accounts also have little to zero friends. Most of them don’t have any other public photo and information available as well.

Some users reported up to 10 ghost accounts using their name.

Posted by UP College of Mass Communication on Saturday, June 6, 2020

Initial crowdsourcing effort of a youth organization based in Cebu also revealed that the number of these empty accounts reached at least 400.

“Increase vigilance on the identity theft. Some fake accounts have blocked the people they are impersonating, so let other people look you up,” Youth Act Now Against Tyranny Cebu said.

Fortunately, many users also reported the succesful taking down of accounts just a few hours after they were reported.

Why this is important

In the Philippines, fake accounts have been actively used in disinformation campaigns. They are used to either amplify a message, drown out a contrary or conflicting message, or create a false sense of the popularity of an idea or cause through amplification and spread.

In fact, Rappler has reported how the social media platform has been used during the elections, manage the crisis during the Southeast Asian Games (SEA Games) 2019, create false narratives about the Martial Law, and fight back online outrage against the government’s coronavirus response.

So far, Facebook has responded by taking down several networks of pages and accounts proven to have violated their polices on spamming and misrepresentation. It has also launched a fact-checking program to help prevent false news from spreading on the platfrom. (READ: Facebook takes down fake account network of Duterte campaign social media manager)

The discovery of the fake empty accounts also comes on the heels of the pending approval of the anti-terrorism bill in the Philippines. Many raised concerns of how the fake accounts can be used to frame people by posting malicious content against the government.  (READ: Facebook cracks down on posts slamming anti-terror bill)

What you can do

Facebook says accounts pretending to be someone you know or someone that doesn’t exist can be reported. Here are the steps: